Patients with Morquio A syndrome will be watching closely on Feb. 28, when the FDA issues its decision on BioMarin's Vimizim.

Developing treatments for rare disease is a risky proposition. Any number of bumps can derail clinical trials, and the lucky few that make it to market address small patient pools unlikely to produce blockbuster therapies. As a result, many companies limit spending on orphan drug research, but of those that do take up the challenge, few do it better than BioMarin (BMRN -1.97%).

BioMarin has built a stable of treatments for rare conditions, and the company hopes to add a fifth product to its lineup at the end of this month when the FDA issues its decision on Vimizim, a treatment for Morquio A syndrome.

Better treatment = better outcome
BioMarin sales have climbed from less than $350 million in 2010 to more than $530 million in the 12 months ending September. If Vimizim wins the FDA's go-ahead on Feb. 28, revenue could go markedly higher -- analysts project that peak sales of the drug could total between $500 and $800 million a year.

This enthusiasm stems from an absence of treatments targeting this particular enzyme deficiency disease. Sadly, the lack of a key enzyme important to muscoskeletal development means patients rarely live beyond 40 years old. And patients endure a progressively worsening quality of life as they age, suggesting a significant need for treatments that can not only delay disease progression but also improve day-to-day living.

Patients treated with Vimizim demonstrated improved stamina and less pain during trials, prompting the FDA advisory panel charged with reviewing the drug to vote in its favor by a 20-to-1 margin last November.

Another win, but pricey nonetheless
If Vimizim does get the FDA's green light, it will join Naglazyme, an enzyme deficiency treatment for MPS VI that had $63 million in third quarter sales; Kuvan, used to treat phenylketonuria; Firdapse, for Lambert-Eaton Myasthenic Syndrome; and Aldurazyme, which the company co-markets with Sanofi. While we won't get the fourth quarter numbers until March 3, those four drugs had total sales of $134 million in Q3.

Assuming Vimizim lives up to analyst projections, it could conceivably double the company's revenue. However, even if that happens, shares of BioMarin remain pricey. 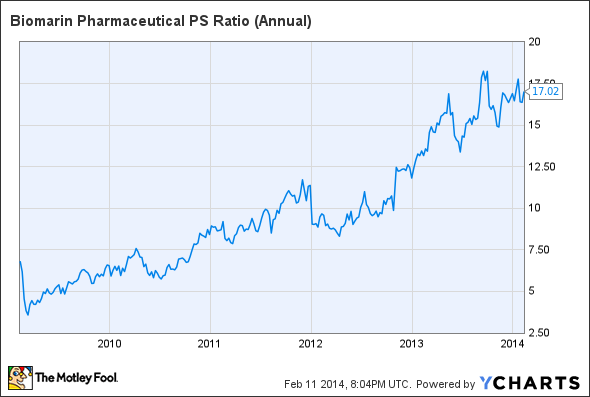 The company boasts a market cap of more than $10 billion, which means it's trading roughly 17 times current sales. Add in another $500 million in Vimizim sales, and the company is still valued at nine times revenue. Since Shire paid 10 times sales for ViroPharma last year, it would appear BioMarin may need a few more winners to justify shares heading a lot higher.

Behind Vimizim, BioMarin has a few other hopefuls working their way through its pipeline. One of the most intriguing is BMN-673, a breast cancer drug for patients with a mutation to the BRCA1 and BRCA2 gene. Cancer cells in patients with that particular mutation have been shown to self-destruct when exposed to PARP-inhibitors like BMN-673, which stop a key protein tasked with cell repair.

The industry has high hopes for BMN-673, which entered phase 3 trials last fall after 50% of patients treated in a phase 1/2 trial responded to the drug. If successful, BMN-673 could change how we treat some cancers by reducing or eliminating chemotherapy, as well as improving the prognosis of those already diagnosed. Since 20% to 25% of breast cancer patients possess the specific BRCA mutation, BMN-673 could have a far larger impact on the company than Vimizim.

However, BioMarin isn't the only company working on a PARP-inhibiting therapy. In phase 2, 52% of triple-negative breast cancer patients treated with AbbVie's (ABBV -1.76%) PARP-inhibitor veliparib in combination with carboplatin and paclitaxel had a complete response. Following that success, AbbVie recently initiated a phase 3 trial for veliparib in that patient population.

Fool-worthy final thoughts
Those diagnosed with Morquio A will be watching the FDA with bated breath on Feb. 28. Since the advisory vote was so lopsided, it's likely most investors already expect the FDA's approval; however, until the approval is final, it's unlikely sales have been fully modeled into analyst forecasts. This suggests we may see a wave of Wall Street upgrades following a positive decision. Regardless, once the decision on Vimizim is made, eyes will probably shift to BMN-673 -- and the race between BioMarin and AbbVie will be on.

Todd Campbell has no position in any stocks mentioned. Todd owns E.B. Capital Markets, LLC. E.B. Capital's clients may or may not have positions in the companies mentioned. Todd also owns Gundalow Advisors, LLC.  Gundalow's clients do not own positions in the companies mentioned. The Motley Fool recommends BioMarin Pharmaceutical. We Fools don't all hold the same opinions, but we all believe that considering a diverse range of insights makes us better investors. The Motley Fool has a disclosure policy.