An inside look at how Tesla plans to conquer the Chinese auto market and fuel widespread EV adoption.

Tesla Motors (TSLA -0.84%) is hoping to unlock even more growth as it expands its operations overseas. The electric-car maker recently entered the world's largest auto market and plans to officially begin Model S deliveries in China as soon as next month. However, the real potential for Tesla comes as the automaker prepares to install its Supercharger network there.

Value creation at its best
Tesla's Supercharger network creates tremendous value for the company because it helps convert more drivers into EV owners by easing so-called range anxiety. One of the biggest limitations to widespread electric-vehicle adoption today is the distance drivers can travel before needing to recharge the car's battery. The Ford (F -2.44%) Focus Electric, for example, gets just 76 miles of range and costs $39,200. For comparison, Tesla's Model S has a range of 208 miles with a starting price of $69,900.

Traditional automakers such as Ford have been trying to catch up to Tesla in terms of EV battery technology for some time now. However, Tesla's innovations in this area aren't limited to battery cells thanks to its proprietary Supercharger network, which enables Model S drivers to travel free along major highways throughout the United States and Europe.

Not only are Tesla's Superchargers the fastest electric-charging stations on the planet, but they also are free to use for Tesla drivers. Today, Tesla has 74 supercharging stations in North America and 14 in Europe. Moreover, the automaker is set to increase that coverage to reach 98% of the U.S. population and parts of Canada by 2015.

The company passed a fresh milestone last month when it connected its East Coast and West Coast Superchargers. This means that Tesla drivers can now travel gas-free across the entire United States. To prove the efficiency of its network, a Tesla team completed a cross-country trip using only the Supercharger stations. The team finished the coast-to-coast drive in a record 76-and-a-half hours, according to a Tesla press release. 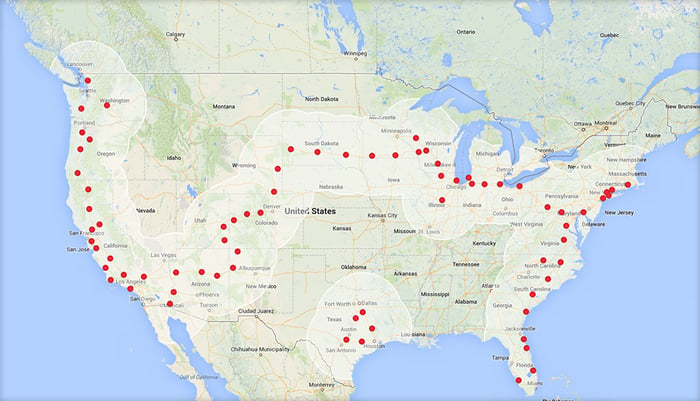 While this is no doubt impressive, the real opportunity comes as Tesla prepares to build out a charging network in the world's most populous nation: China.

Taking charge
Tesla hopes to install charging stations in China that would let Model S drivers travel for free between major cities such as Beijing and Shanghai, according to The Wall Street Journal. It is likely that the Chinese government will welcome Tesla's electric-charging initiative, particularly as the country faces increased "smog emergencies" because of air pollution. Installing a supercharging network in China would incentivize Chinese drivers to buy Tesla cars. This is especially important because, as an imported product, Tesla's Model S doesn't currently qualify for government subsidies in China.

With a network of free charging stations in China, it would give Tesla a competitive edge over rival automakers selling cars in Asia. So how long will it be before Tesla surpasses sales of Ford in the Chinese electric-car market? Only time will tell. However, one thing is clear: Tesla needs to succeed in China if it's going to live up to its lofty valuation. Shares of Tesla are trading near an all-time high today (around $199.57 as of midday trading).

Tamara Rutter owns shares of Tesla Motors. The Motley Fool recommends and owns shares of Ford and Tesla Motors. Try any of our Foolish newsletter services free for 30 days. We Fools may not all hold the same opinions, but we all believe that considering a diverse range of insights makes us better investors. The Motley Fool has a disclosure policy.