Genting, the operator of Resorts World casinos, is expanding in the gaming and entertainment markets. Now this Malaysian powerhouse is coming for Vegas.

Genting, the Malaysian company that runs Resorts World casinos in Malaysia, Singapore, and soon other Asian countries, has been rapidly expanding its operations and its profits in Asia. Subsidiaries of the company even run a cruise line out of Hong Kong, which includes travel around Asia and on-board gambling. Now, the company has started construction on Resorts World Las Vegas.

This company has been quickly expanding over the last decade, but unless you are willing to trade on the Kuala Lumpur stock exchange, you aren't going to get in on this growth like you could have with U.S. based casino companies operating in Asia. However, as a U.S.-based investor, you still need to know about this coming gaming powerhouse and what it could mean for your portfolio.

Competition in Asia
Las Vegas Sands (LVS 2.28%) has shown massive gains over the last few years, most of which have come from Asia. While Macau has led this growth, the company's second-largest revenue producer in Asia is its Marina Bay Sands casino in Singapore. The government of Singapore only allows for two casino licenses, with the other one held by Genting with its Resorts World Sentosa. Competition between these two casinos has been fierce as the country reported $2.7 billion in total gaming revenues for the year ending June 2013. Genting raked 68% of this revenue into its casino to beat out Sands as the top player in the country.

The Singapore location and the original Malaysia location have both helped Genting get on the map in Asian gaming. The company is now preparing for its Resorts World casino in Macau. Total gambling revenues in this casino mecca topped $45 billion in 2013, and Genting is preparing to get its slice. If the company can compete in Macau like it has in Singapore, it will likely get a good-sized piece of this revenue.

While Genting is coming late to the Macau casino table, the gaming company is preparing to be the front runner in Japan. With the government making a decision in the coming months about how and where casinos will operate in the country, Genting is already in talks with Osaka officials about its plans for a Resorts World Japan. Analysts expect that Japan could overtake Singapore as the second-largest gaming market in the world in the next few years. Getting a strong hold on this market right away is sure to be part of Genting's global strategy. Other gaming companies such as Wynn Resorts (WYNN 1.32%) and Caesars Entertainment are also vying for a bid.

Soon to be competing in the U.S.
Genting already runs a gambling operation in New York City with Resorts World New York near the Aqueduct race track, and boasts the highest-grossing U.S. slot machine parlor. 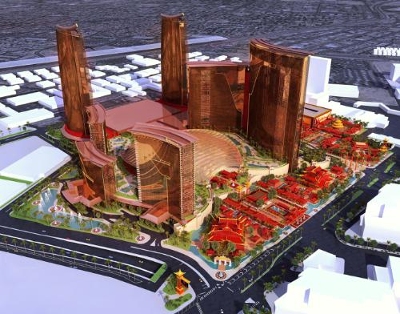 Rendered preview of what the resort is expected to look like. Photo: PR Newswire

The company announced in 2013 that it would buy and take over a half-finished project on the Vegas strip that has been sitting vacant since Boyd Gaming Corp. abandoned construction on it in 2008. Genting will use the land to build a Resorts World Las Vegas. The project is an estimated $2 billion to $4 billion endeavor set to open in 2015.

This may come as tough news for Wynn Resorts and other big-name casinos in Las Vegas. Steve Wynn, the Wynn Resorts CEO, has complained about the abandoned area that Genting is now developing, saying that the half-finished project is an eye-sore and a drag on the surrounding area. Now he is getting his wish, with the Asian giant competing just across the street.

Senior director for the gaming, lodging, and leisure sector of Fitch Ratings, Michael Paladino, said in a report last year that the added lodging capacity of Resorts World could drive down average daily room rates for nearby competing casinos. As the only entirely Asian-themed resort in Las Vegas, Resorts World Las Vegas hopes to attract visitors to its unique resort with a replica of the Great Wall of China, exhibits of terra-cotta warriors, and even live pandas.

Theme park partnering strategy, an added level of competition
Resorts World casinos have a unique way of partnering with media and entertainment companies to build family oriented theme parks attached to the casino resorts. In Singapore, Resorts World Sentosa is attached to Universal Studios Singapore, licensed by Comcast (CMCSA -1.16%) under NBCUniversal. Comcast made $270 million in total theme park income during the third quarter of 2013, up 7% from the same quarter last year.

Recently, Twenty-First Century Fox announced plans to build its first-ever theme park, which will be attached to Resorts World Malaysia. Trying to also diversify with theme park revenue as Comcast and Disney do, Fox and Genting hope to make this partnership as successful as the one with Universal Studios. We will wait to see if Genting deploys the same strategy in Las Vegas.

Foolish investors will need to keep a watchful eye on this entertainment powerhouse
The growth of gaming in Asia has been one reason for share prices of companies in the industry skyrocketing over the last decade; Las Vegas Sands' share price has grown over 2,000% over the last five years. Of course, it wouldn't only be U.S. gaming companies that would take advantage of this growth. Genting has proven to be a tough competitor in Asia, and promises to be in Las Vegas as well. If U.S.-based investors can't invest in the company, they are wise to understand it for the threats and opportunities it brings to the market in the long run.