CF Industries may disappoint when it reports fourth-quarter earnings next week, but key updates about its business should keep investors hopeful.

CF Industries (CF -1.44%) may have nothing to do with the potash nutrient that has faced rough waters in recent months, but its stock has under-performed nearly every other fertilizer stock year to date. 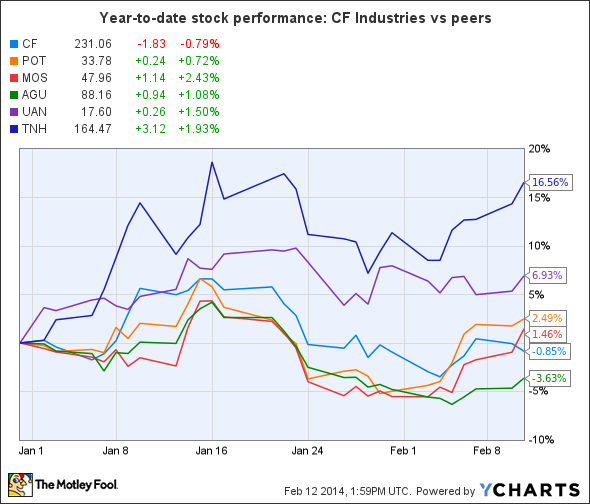 Ironically, that drop came after CF Industries' stock topped the fertilizer industry in 2013. So what's bidding the shares down this year? Is it just a case of profit booking, or is something brewing that bodes ill for the company in the near future? Investors will probably get an answer next week when CF Industries reports its fourth-quarter and full-year numbers Tuesday. But investors will need to look beyond CF's numbers to get an idea about where the company, and its shares, are headed.

Low expectations
CF's upcoming earnings call should give updates about three major events that could substantially change the company's standing in the industry, both from business and financial points of view. But before that, let's quickly see what CF's operational performance could look like in the fourth quarter.

The Street projects CF's earnings per share to drop a staggering 38% year over year on 23% lower revenue. Fertilizer market dynamics have changed dramatically over the past year, so a year-over-year comparison for CF should look somber.

Will the tide turn?
Nitrogen prices slumped over the past few months, partly because of a surge in Chinese urea exports that put pressure on already low domestic demand. PotashCorp (POT) realized 29% lower selling prices for nitrogen during its last quarter despite a 36% jump in sales volumes. But given that Agrium recently mentioned lower demand for urea ammonium nitrate, or UAN, as one of the reasons behind its lower fourth-quarter guidance, CF's volumes could take a big hit, since UAN forms the largest portion of its total volumes.

That said, CF enjoys the flexibility to modify its product mix according to its present market situation. For example, if urea prices fall by a bigger margin compared to, say, ammonia, CF can compensate in part by producing and selling more ammonia instead of urea. This strategy may have helped the company in the fourth quarter.

But phosphate will continue to be a drag, given that PotashCorp and Mosaic (MOS -0.40%) realized 21% and 28% lower prices for phosphate year over year in their respective last quarters. On a positive note, both companies reported higher volumes, so the phosphate market could be turning a corner. But CF may not have to worry much about that, considering that it's just a step away from offloading its phosphate business.

The biggest headline of the quarter
The most significant development in the last quarter was CF's agreement to sell its entire phosphate business to Mosaic for a cash consideration of $1.4 billion, combined with a long-term ammonia-supply contract. With the U.S. Department of Justice giving the deal a green light this January, investors should look for critical updates about when CF expects the deal to close in its upcoming earnings call.

Since the move will make CF a pure nitrogen play, investors may also want to pay closer attention to prices of a key input, natural gas. Natural gas prices climbed substantially over the past quarter as extreme weather across North America fueled consumption. That also explains why analysts expect to see such a big drop in CF's fourth-quarter profits.

Nevertheless, CF has struck a smart deal with Mosaic to supply it with up to 800,000 tons of ammonia annually for up to 15 years at a price based on CF's natural gas cost. So in a way, CF has locked in a part of its profit, which is certainly positive for the company and its investors going forward.

Two big updates to watch for
The deal with Mosaic isn't the only one that investors should keep track of. In December, CF revealed plans for setting up a master limited partnership that will allow it to raise capital while avoiding taxes on income. For investors, an MLP would mean solid dividends. CF may drop further hints about its plans in the upcoming call, so keep an eye on them.

Also, watch for CF's cash projections for the year, which should be optimistic thanks to the proceeds from the Mosaic deal and the additional capital that the company plans to raise. Activist investor Daniel Loeb is pressuring CF to improve its dividends, so investors can keep their hopes alive.

Foolish takeaway
CF's upcoming earnings report certainly can't be missed. While CF's outlook for the nitrogen market will be valuable information for investors in any fertilizer stock, updates about the deal with Mosaic, MLP, and cash flow will hold the key to what lies ahead for CF investors. And any positive news should be enough to reverse the stock's recent fall.

Neha Chamaria has no position in any stocks mentioned. The Motley Fool owns shares of CF Industries Holdings and PotashCorp. We Fools may not all hold the same opinions, but we all believe that considering a diverse range of insights makes us better investors. The Motley Fool has a disclosure policy.