Under Armour's new speedskating suit was hyped as the best ever. But now, with U.S. Speedskating failing miserably at the Olympics, the company's innovative reputation is at risk.

On the cusp of this year's Winter Olympics, Team USA believed it was a little bit of both. A state-of-the-art project led by two multi-billion-dollar companies created what athletes deemed "the fastest speedskating suit ever made," something most assumed would give Americans a leg up on their competition.

This week, though, rumors are percolating that U.S. Speedskating's potential advantage has become a weakness. The Wall Street Journal reports that the suits, designed by Under Armour (UAA -2.90%) and Lockheed Martin (LMT -0.05%), could have a "design flaw that may be slowing down skaters."

Has this become the biggest story of Sochi?

The background
In late 2011, U.S. Speedskating announced its new apparel sponsorship with Under Armour, canning its near-decade-long deal with Nike's (NKE -0.94%) Swift Suit technology. Although the value of the arrangement was never made public, between $10 million and $20 million is a reasonable estimate, considering the average value of most major sponsorships and what Under Armour has spent in the past.

Over the next two years, the company, in partnership with Lockheed Martin, spent "millions" more developing its new speedskating suit, according to The Washington Post. Dubbed the Mach 39, the suit was universally praised by athletes and the experts who tested it.

A rough exterior fabric (seen above) is noted as the "biggest alteration" from designs of the past, something the Chicago Tribune described in detail last month. On the level of outperformance, the company's director of materials, Mark Cumiskey, reportedly said the Mach 39 "creamed" Nike's suit, claiming, "it wasn't close."

The fallout
All of this hype meant nothing when The Wall Street Journal's story broke this week. The outlet cited people familiar with Team USA who think the Mach 39's heat vents -- another of its innovations -- are slowing skaters down.

Although an Under Armour VP responded on Bloomberg, saying, "it's not the suits … because these are great athletes … everyone is searching for answers," questions remain. America hasn't made a single speedskating podium thus far, despite the fact that its World Cup season was strong, and the sport is historically the country's best Winter Olympics event. Before Sochi, the U.S. had won 29 gold medals in speedskating; the next best was figure skating and alpine skiing, with 14 each.

No matter who's at fault, will this hurt Under Armour's business? 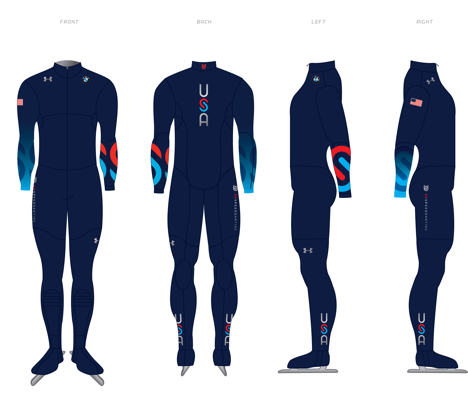 Source: Under Armour. The company's original design for the U.S. Speedskating team.

With millions of dollars at stake, it very well could.

The Olympics is one of the most-watched sporting events on the planet, and sponsors want their time in the sun to shine as bright as possible. Unlike a long-term IOC partner like Coca-Cola or Procter & Gamble, apparel providers are prone to greater turnover if their gear doesn't work. Before Nike in 1998, U.S. Speedskating was sponsored by Mizuno, and there were others before that.

With rumors swirling that this year's skaters -- superstars like Shani Davis and Brittany Bowe -- will switch to an older suit for the rest of their races, things aren't looking good for Under Armour. Even though the replacement will probably be an older Under Armour model, it's a lose-lose scenario for the company.

If U.S. speedskaters have success the rest of the way, critics will claim the Mach 39 should've gone through more tests. And if the team continues to struggle? Many will say it should have stuck with Nike. Either way, Under Armour's viability as the sponsor of America's best Winter Olympics sport will come into question over the coming months, and the ramifications could be even more profound.

The future
With sponsorship costs rising by around 20% a year and more than $2 billion in expected 2013 revenue, Under Armour is very reliant on its partnerships to drive growth. A highly competitive athletics market and zero patents on fabric or processing methods gives the company little room to breathe.

Innovation has traditionally been Under Armour's best defense against peers, and a lack of it on such an enormous stage -- perceived or real -- poses significant risks for the company. In its latest annual report, Under Armour revealed that an inability to develop new products and issues with global brand awareness could endanger its long-term health.

The speedskating troubles represent the absolute worst-case scenario for both of these prospective hazards. Under Armour is receiving global brand awareness, but as a company whose products are a hindrance to performance. The company's international reputation is very much at risk from what might turn out to be a hasty launch and the negative press that accompanies it.

Although not every piece of its $200 million annual sponsorship portfolio will be a success, this is an unmitigated disaster. For millions around the world who are getting their introduction to Under Armour at these Olympics, the perception -- fair or not -- is of a company that is turning winners into losers.