Please ensure Javascript is enabled for purposes of website accessibility
Log In Help Join The Motley Fool
Free Article Join Over 1 Million Premium Members And Get More In-Depth Stock Guidance and Research
By Morgan Housel - Feb 14, 2014 at 11:57AM

The battle between you and groupthink. 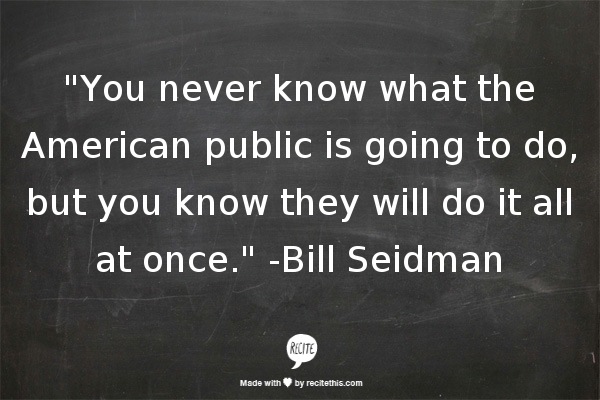 Robert Shiller won the Nobel Prize in economics last year for his research on spotting market bubbles. He's also a pioneer of behavioral finance, developing brilliant explanations for how psychology causes us to do dumb things with our money.

Shiller didn't just see last decade's housing bubble coming; he was in a position to do something about it. From 1990 to 2004, Shiller sat on the economic advisory panel of the Federal Reserve Bank of New York, holding the attention of the only people in the world powerful enough to stop the housing bubble by raising interest rates.

So here's the trillion-dollar question: Did Shiller warn his Fed colleagues that the housing bubble was doomed to burst, taking the economy down with it?

Yes -- but only timidly.

"I felt the need to use restraint," Shiller said in Dan Gardner's book, Future Babble. "The consensus in the group was that there was no bubble and no need to raise interest rates. To suggest otherwise was distinctly uncomfortable. I [made my point] very gently, and felt vulnerable expressing such quirky views."

Shiller summed up the experience perfectly: "Deviating too far from consensus leaves one feeling potentially ostracized from the group, with the risk that one may be terminated."

Here is a man of unquestioned authority who had conviction in his beliefs and understood -- no, discovered -- the psychological tricks our brains play on us when thinking about money.

Yet he still felt pressure to conform.

If Shiller is vulnerable to groupthink, believe me, you and I are, too.

The word "groupthink" was first used not to describe amateur lemmings, but coined in a 1972 study showing how seasoned professionals working in their field of expertise tended to follow each other off a cliff toward bad decisions. It doesn't matter how much experience or education you have in a subject. Most of us are hardwired from birth to follow the crowd.

One of the biggest ironies in investing is that while almost everyone thinks they are a contrarian, almost no one actually is. I remember 2007, right before the market peaked. Just about everybody I knew thought they were a value investor, zigging where others zagged. But at investing conferences, you found out that all these guys were basically buying the same stocks. What people thought was a contrarian view was actually rampant groupthink. It felt great when you, the "contrarian," had your views confirmed by another "contrarian." But contrarianism isn't supposed to feel good, and you're not supposed to have it confirmed by others. That's why so few can actually do it. It's rare -- not impossible, but rare -- that someone can remain blissfully content when everyone else around them thinks they're crazy. One of the nastiest tricks our minds play is convincing nearly all of us that we can be that person.

After World War II, there was widespread fear and curiosity about societies conforming to a unified belief, namely communism. Sociologists began studying how humans conform, and conducted some fascinating studies.

In the 1950s, Solomon Asch brought a group of students together and asked them to solve a set of problems, such as whether two lines were the same length. These were simple problems with obvious answers. But several of the students weren't trying to pick the right answers. They were actors working for Asch, purposely giving the wrong answers in front of their peers.

Asch repeated the study with varying numbers of actor-students blurting out the wrong answers. His conclusion: Three-quarters of the test subjects went along with the actors' wrong answers at least once. In any given experiment, at least one-third of test subjects ignored the obvious answer and followed the actors. Just one in four consistently gave the right answer even when their acting peers disagreed with them.

Even when everyone around you is giving an obviously wrong answer, your tendency to second-guess yourself, not want to embarrass yourself, and your natural desire to fit in can trump every bit of rationality you think you have.

Rather than assuming you can be a contrarian investor, and learning the hard way that you can't, I think it's better to put your finances on some form of autopilot, especially if you can build a contrarian bent into that system. It's how you become a smart investor while taking emotions out of the equation.

Dollar-cost averaging -- investing the same amount of money each month come rain or shine -- is one of the best ways to do this. This doesn't necessarily mean you have to invest in index funds. Investing, say, $1,000 a month, every month, into a group of your favorite stocks might beat saving up cash and tactically trying to get in after a market crash. This is probably the most sensible strategy for investors with a history of following the crowd to buy-high, sell-low disappointments.

If you're investing a mix of stock and bond index funds, rebalancing your portfolio at the same time each year is another way to automatically become a contrarian. Say you want a portfolio with 80% stocks and 20% bonds. If stocks have a great year and push your portfolio to 85% stocks and 15% bonds, you sell a portion of your stocks and use the proceeds to buy bonds until the 80/20 ratio is back in balance. Do this every year. You'll probably do great over time.

Still think you have the disposition to be a contrarian? The best way I know to go about this is to plan out your contrarianism ahead of time. I do this with a chart directing how much money I plan to invest when the market falls by a certain amount. My goal is to use history to guide my contrarianism, investing enough money in moderate market downturns while keeping a sufficient amount to take advantage of lower prices if things get worse. If I had $1,000 in my contrarian fund, I'd deploy it like this:

What's important is that you understand that your ability to think you're a contrarian is probably not as powerful as your innate desire to fit into crowds. Anything you can do today to make investing less emotional will make you a better investor tomorrow.

Revisiting the IPO Boom of 2021