PepsiCo answered important questions about its future on its fourth-quarter conference call. Learn about its plans for its beverage business, the at-home carbonation market, and the energy-drink category.

PepsiCo's (PEP -1.50%) fourth-quarter earnings beat expectations, coming in at $1.05 per share versus expectations of $1.01 per share. However, the real news for long-term investors is buried in the details of the earnings release and conference call, where management revealed its plans for the beverage business, at-home carbonation channel, and energy-drink category. PepsiCo's plan for each of these items has implications for the stock's value for long-term shareholders.

All eyes on the beverage business
PepsiCo's North American beverage segment has been struggling mightily and continued to do so in the fourth quarter. Beverage volume declined 2%, but revenue remained flat due to price increases. PepsiCo's CEO, Indra Nooyi, reports that lower prices are not driving volume growth, so the company plans to maintain or raise its beverage prices in 2014. As a result, unit volume may continue to decline as the company struggles to maintain its current revenue level.

The poor performance of the beverage unit relative to the snacks business may explain why Nooyi spent a large portion of the conference call defending the beverage business. Activist investor Nelson Peltz is pressuring Nooyi to acquire snacks company Mondelez International and spin off the underperforming beverage unit. However, Nooyi argues that the combination of beverages and snacks adds value to food-service providers that would rather deal with one large company that can serve all of their needs rather than a separate beverage provider and separate snacks provider.

The most convincing case for keeping the two units together is on slide 15 of the conference-call presentation. It shows that PepsiCo is the largest supplier for its top-four grocery partners. If PepsiCo were to spin off its beverage business, its snacks business would become its partners' fourth-largest food supplier and its beverage business would be close to dropping out of the top-10 suppliers. 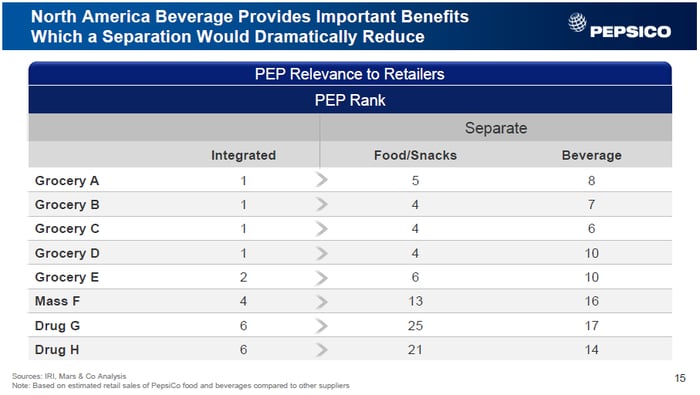 Just as consumers prefer to buy their Internet and television from one service provider, retailers enjoy the convenience of having a one-stop-shop supplier that can supply a variety of needs. In addition, PepsiCo's importance as a supplier to its grocery partners gives it bargaining power in negotiations. If the two businesses were separated -- and thus became less important suppliers -- PepsiCo would be in a worse bargaining position.

Regardless of investors' views on the matter, Nooyi's defense of the current structure makes it clear that the snacks and beverage businesses will remain together.

Answers the questions on everyone's mind
Besides the status of the beverage business, investors wondered whether PepsiCo planned to follow Coca-Cola into the at-home carbonation channel. Coca-Cola's deal with Green Mountain Coffee Roasters set off speculation that PepsiCo would enter into a similar arrangement with SodaStream. However, after the conference call, it does not appear that a deal is imminent. Nooyi is interested in the at-home channel, but she says the company is not ready to commit to a technology because none has proven itself yet. Surprisingly, she left open the possibility that a deal could get done with Green Mountain, in which Coca-Cola has a 10% equity stake.

Based on Nooyi's comments, it seems like the company will wait to commit until a clear leader emerges in the at-home space. Since Green Mountain's Keurig Cold brewer is scheduled to hit shelves for the first time later this year, it could be 2015 or later until PepsiCo enters the at-home channel.

Another question generating some buzz in recent weeks is whether either of the soft drink giants would acquire a company in the energy-drink space. Speculation swirled that Coca-Cola could buy Monster Beverage in an attempt to gain share in the fast-growing energy drinks category. PepsiCo, too, could use a boost to its energy drink share in a market dominated by Monster, Red Bull, and Rockstar. However, Nooyi again quelled the excitement over a possible acquisition by saying she was content with PepsiCo's current energy-drink portfolio, which includes Mountain Dew Kickstart and AMP Energy.

Foolish takeaway
PepsiCo seems content to stay on its current course; it plans to keep the beverage and snacks businesses together to milk their synergies, it is not yet ready to enter the at-home carbonation channel, and it plans to grow organically in the energy drink category rather than make a large acquisition. PepsiCo's commitment to the status quo may explain why its stock price fell more than 3.5% in morning trading after the call.

Long-term investors should concentrate their research on whether or not drastic changes are needed to salvage PepsiCo's business. The company has a long history of profitability but has hit a rough stretch in its beverage business. Deciding how serious the beverage decline could get is the key to determining the attractiveness of PepsiCo's stock after the sell-off -- a determination that each investor must make for himself or herself.