Please ensure Javascript is enabled for purposes of website accessibility
Log In Help Join The Motley Fool
Free Article Join Over 1 Million Premium Members And Get More In-Depth Stock Guidance and Research
By Patrick Morris - Feb 15, 2014 at 7:00AM

Bank of America operates in a variety of different business, but its most important one has delivered impressive growth compared to Wells Fargo and JPMorgan Chase, and it could be poised for even more.

Bank of America (BAC 2.71%) has a variety of enticing reasons to consider an investment in it, but recent guidance regarding its third largest business may in fact be at the top of the list.

When most people consider Bank of America, they largely think of it as a consumer bank. After all, it's the largest bank in the US by total deposits, and almost all its advertising focuses on its consumer operations. Yet not only does it have immense consumer operations, but also offers corporate and investment banking at a substantial size and scale.

But beyond its consumer and corporate operations is its Global Wealth and Investment Management business -- which contains the Merrill Lynch and U.S. Trust brands -- that delivered $3 billion in net income to the bank in 2013. Impressively, this is well ahead of both JPMorgan Chase (JPM 2.13%) and Wells Fargo (WFC 2.54%) on a raw dollar, percent of income, and growth basis:

And while its results in 2013 were clearly impressive, it turns out perhaps the best is yet to come from this critical business.

Impressive growth
In total, Bank of America's Wealth & Investment Management business has an incredible $2.4 trillion in client balances, and is the top ranked firm in the US in both high net worth client assets and personal trust assets under management. Its wealth management business has grown its assets under management by 8% per year since 2011, and, incredibly, it has grown its client balances of those with more than $10 million dollars by 17% a year over that same time period.

In addition to the impressive asset growth is its growth in the vitally important and stable asset management fee revenue, which has grown from $5.2 billion in 2010 to $6.8 in 2013, representing an annualized growth rate of 9%. This has been a function of both adding advisors and also growing the productivity of its experienced advisors, as the bank's average revenue per advisor grow by 8% annually, from $949,000 to $1.3 million.

All of these factors have combined to allow the business to improve profitability in an astounding way since things took a slight dip in 2010: 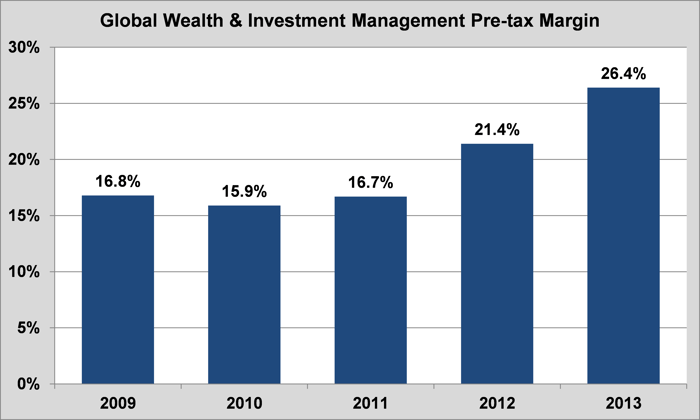 Even with the turmoil that has seemingly characterized it through the years, Bank of America's Wealth Management business has been a key bright spot. Yet -- incredibly -- the best may be ahead of it.

Impressive potential
Credit Suisse projects over the next five years the number of millionaires in the United States will grow from 13.2 million to 18.6 million, representing a 41% gain. In addition, more than 10,000 baby boomers will turn 65 each day from 2011 to 2030, and more than $10.8 trillion dollars of assets are expected to be transferred by 2020. In addition, there is currently almost $40 trillion in current investable assets in the United States, which means even with its $2.4 trillion in client balances there is still a wealth of market share that could be gained.

Yet not only are there broader industry opportunities, but also the reality that Bank of America has a broad range of opportunities to leverage existing relationships with customers, like capitalizing on an individual who may only have a credit card or checking account with the bank. To this end, Bank of America estimates there are more than 9 million individuals with $11.6 trillion in assets who have a consumer account with Bank of America, but not their retirement accounts. Truly the market potential is enormous.

There is no denying the wealth management industry as a whole could be poised for incredible growth in the coming years. And Bank of America is clearly well positioned to capitalize on it, which would ultimately have the compounding effect of creating more wealth for its shareholders.