With the cost of college rising at a staggering rate, many have begun to question if it is even worth it. Yet a recent study reveals rather starling news.

It has been widely documented the cost of college is rising all too quickly and student loans are becoming more of a burden than ever for Americans, but it turns out one thing is becoming more costly than going to college.

Rising costs
There is no denying the cost of college has been on an unprecedented run over the last 40 years, with the average cost of college in constant dollars -- meaning inflation is factored in -- three times higher in 2013 than it was in 1973: 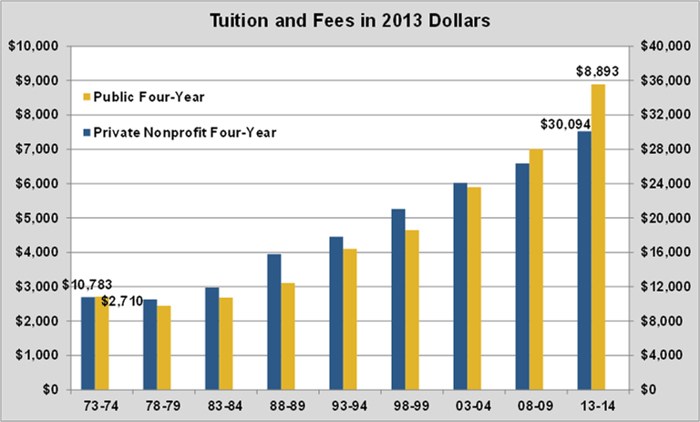 When you consider that the price of college has more than tripled over the last 40 years while the income of Americans has only doubled, put simply, college is becoming less and less affordable. Understandably, this has led many to speculate if going to college is even worth the cost, and with student debt levels rising to more than $1 trillion, that seems like a justified question.

Yet the latest report from the Pew Research Center reveals not going to college is even more costly.

The widening gap
In a recent report entitled The Rising Cost of Not Going to College, the Pew Center found that the median salary for those age 25 to 32, deemed Millennials, with a bachelor's degree or more stood at $45,500, which was more than 50% higher than those with a two-year degree, some college, or a high school diploma. The disparities between the unemployment rate and the percent of those deemed as living in poverty was even more startling:

Put differently, a four-year college degree cuts the chance of someone being unemployed in half.

Even more staggering than the gap between those with and without a degree is how that gap has widened over the years: 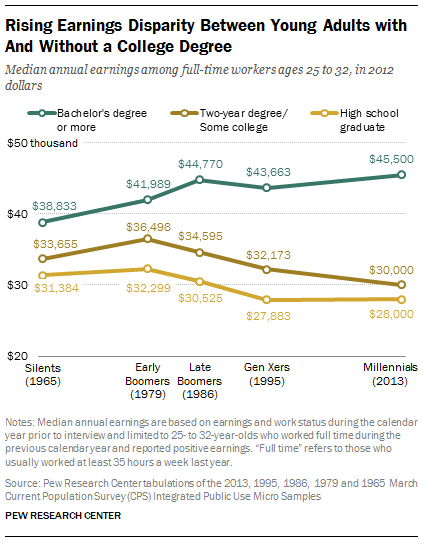 As you can see, for the "Silents" generation -- those born between 1925 and 1942 -- a college degree only meant a person could expect to earn 15% more money each year than someone with a two-year degree. Yet for the Millennial generation, that gap has ballooned to more than 50%.

Much needs to be done about the ballooning costs of college and the impact the rising costs have on millions of lives. However, while the cost college is rising at a startling pace, perhaps even more frightening is the rapidly expanding ultimate cost of not going to college.

Is dLocal a Sell After This Short-Seller's Report?

Can Nu Holdings Replicate Its Success in Brazil in Other Latin American Markets?
356%