These banks are trading at big discounts to book value, but does that mean we should jump in?

Put simply, I think that stocks in the financial sector are cheap right now.

However, there are a handful of banks that trade for substantial discounts to book value, making them look like incredible bargains -- at least at first glance. Let's look at a few of the "cheapest" bank stocks in the sector and see whether they're actually good bargains, or if they're cheap for a reason.

The best value in U.S. banking
Citigroup (C -1.45%) is currently trading at around 74% of its book value and is priced below its tangible book value, a historical rarity for banks. Since the financial crisis, Citigroup has taken steps to rid its balance sheet of bad assets, and while it's not quite done, the Citi Holdings division where most of the problem assets are has shrunk considerably. 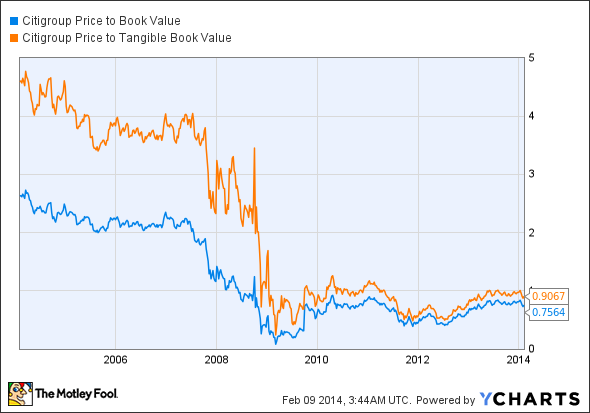 The bank has been growing its deposits and (healthy) loan portfolio, all while reducing net credit losses by 15% over the past year. There has been some weakness recently, particularly in the fixed-income trading business, but this is probably a temporary hiccup.

The temporary weakness caused Citigroup to disappoint the market during its latest earnings report, and its stock price has dropped by about 10% since the report a few weeks ago. I think this dip in price is a great second chance to get in on the best bargain among U.S.-based banks. Citigroup is very cheap, and its valuation more than makes up for any risk. This bank will not be on sale like this forever!

The biggest bargains in banking are abroad (but beware of the risks!)
The cheapest banks on a price-to-book value basis are overseas, and two in particular that caught my eye are Royal Bank of Scotland (NWG 0.47%) and Deutsche Bank AG (DB -1.32%). These banks are excellent examples in my bargain-hunting, because one is a bargain, and one is cheap for a reason.

Royal Bank of Scotland appears especially cheap right now by most metrics. Shares are trading for just over half of book value, but, as the saying goes: "If it sounds too good to be true, it probably is." The main reason I'm shying away from investing in RBS is that the bank's restructuring is still in a very early phase, especially when compared with U.S. banks.

The bank has done a good job so far of cutting costs and downsizing its operations, but the economic conditions in the U.K. and Europe are a cause for concern. In addition, the U.K. government holds an 82% stake in RBS, meaning that the government has substantial say in what goes on at the bank. Generally, government control like this should be a red flag to outside investors.

Deutsche Bank, on the other hand, is a cheap bank that may indeed be worth a look. Shares are trading for around 66% of book value and 87% of tangible book value. In my view, Deutsche Bank is simply a much more solid operation than RBS.

Instead of the massive downsizing that we've seen from most of its competitors, Deutsche Bank has decided to diversify its operations by acquiring several smaller banks, increasing its exposure to retail banking and expanding its client base. The bank has also made it a priority to improve the performance of its investment banking division. The bank has healthier capital ratios than most of its peers and anticipates raising return on equity to 12% by next year, part of the company's strategic plan known as "Strategy 2015+."

Foolish final thoughts
Many banks are in the midst of a "turnaround" of some sort right now, and this is the main reason the sector is relatively cheap right now. The only difference between companies is how massive of a turnaround they need and how much further they still have to go.

Companies like Royal Bank of Scotland are still in the very early stages of their turnarounds, which adds tremendous uncertainty for investors. I prefer to stick with companies like Citigroup and Deutsche, which have made excellent progress but still have a way to go -- which is why they still trade for a discount.

There may be some further price swings to come over the next couple of years as the companies' plans play out, but as Foolish investors, we're in it for the long haul. You may not be thrilled with the performance of these stocks six months from now, but I believe that six years from now, you'll be smiling from ear to ear for having bought in at these prices.

Matthew Frankel has no position in any stocks mentioned. The Motley Fool owns shares of Citigroup. We Fools don't all hold the same opinions, but we all believe that considering a diverse range of insights makes us better investors. The Motley Fool has a disclosure policy.

Citigroup's Investment Banking Business Is Struggling More Than Its Peers -- Should Investors Be Worried?
366%