Please ensure Javascript is enabled for purposes of website accessibility
Log In Help Join The Motley Fool
Free Article Join Over 1 Million Premium Members And Get More In-Depth Stock Guidance and Research
By Brandy Betz - Feb 15, 2014 at 10:00AM

The online streaming service faces new competition from Apple and Google. But there's only one metric investors need to watch.

Pandora Media (P) recently reported the most profitable quarter since the music-streaming company's IPO in 2011. But high royalty fees continue to consume most of Pandora's revenue, and new services from Apple (AAPL -1.51%) and Google (GOOGL -2.46%) threaten to steal listeners. How can Pandora improve its monetization?

It's all about the ads
Pandora has several key metrics, but the most important is advertising revenue per thousand listener hours, or ad RPMs. Why do ad RPMs matter more than the number of active listeners or the number of listening hours? Pandora's content costs increase proportionally to the amount of listeners. That means listeners actually cost the company money. So, advertising remains Pandora's main source of revenue.

Pandora reports the ad RPMs according to listening platform per calendar quarter: traditional computer versus mobile and other connected devices. 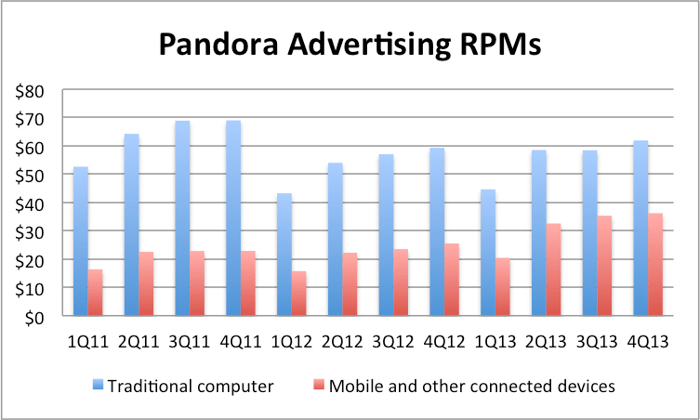 Pandora's ad revenue tends to follow a steady model of increasing through the year up to the holiday season and then dropping back off at the start of the year. The growth of traditional computer ad RPMs wavered in 2012 before starting to recover last year, and this segment still accounts for more than half of ad RPMs.

All of this isn't to say that the number of listeners or listener hours don't matter. Those metrics serve as an important selling point to potential advertisers.

The tricky royalty fees hit all online music streaming services. Spotify hasn't had any better luck monetizing its service. But the entry of Google and Apple into the streaming world has to make the difficult task of offsetting costs seem downright Herculean.

Competitor advantage
Apple and Google both recently launched competing music-streaming services that could do more to hurt Pandora's number of listeners than Spotify.

Google has the weaker of the two offerings with its Google Play Music All Access, which only has an ad-free version that costs $9.99 a month compared to Pandora's own ad-free option at $3.99 a month. But the service might tempt those with Android devices and the majority of their music purchases made through the Play store.

Apple fans get a free streaming option with iTunes Radio. And royalty-receiving musicians will prefer this service over Pandora. According to a Wall Street Journal report last year, Apple will actually pay out more in content acquisition costs for its iTunes Radio than Pandora -- 0.13 cents per listen compared to Pandora's 0.12 cents. The tech giant will bump payments up to 0.14 cents in the second year and also pays out a low double-digit percentage of advertising revenue proportional to a music label's prevalence.But Apple stands in a better position from Pandora to attack those costs. The royalty fees don't apply to songs that a user already owns through iTunes. And Apple doesn't need to even make a profit on Radio; the service works better as a way to promote iTunes downloads and purchases of the company's lagging iPod products.

Foolish final thoughts
Pandora's growing ad revenue and that's a positive sign. But the content acquisition costs tied to streaming services might prove too large a burden for Pandora to bear. Apple and Google only need to lure people in for purchases of music and music playing devices. Pandora has to stick to pushing ad spots.

Brandy Betz has no position in any stocks mentioned. The Motley Fool recommends Apple, Google, and Pandora Media. The Motley Fool owns shares of Apple and Google. Try any of our Foolish newsletter services free for 30 days. We Fools may not all hold the same opinions, but we all believe that considering a diverse range of insights makes us better investors. The Motley Fool has a disclosure policy.