Please ensure Javascript is enabled for purposes of website accessibility
Log In Help Join The Motley Fool
Free Article Join Over 1 Million Premium Members And Get More In-Depth Stock Guidance and Research
By Nickey Friedman - Feb 15, 2014 at 5:00AM

You've heard of the cola wars, the coffee wars, and the hamburger wars. Now we have the breakfast wars, and you won't believe who's setting an early alarm to lure the hungry morning masses. 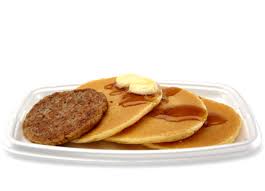 For many years, McDonald's (MCD -0.94%) has been the place to go to grab breakfast on the run. Sure, there's always been some light competition from other fast-food operators, but McDonald's has always dominated the morning munchies.

Well, put down your hotcakes, hash browns, and piping hot McCafe because there's a new war brewing over breakfast business, and you won't believe who's setting an early alarm to lure the hungry morning masses.

What? Tacos for breakfast?
When I first heard that Yum! Brands' (YUM 0.07%) Taco Bell was serving breakfast, I laughed. It sounded like a desperate, bizarre move.

Take a look at the breakfast menu and you'll see that we're not talking about tacos for breakfast, here. Or at least not traditional ones.

Taco Bell has come up with a creative lineup that includes the Waffle Taco and Crunchwraps. They actually look pretty good. And they also look much easier to hold and eat while commuting to work (hopefully as a passenger!).

Yum! Brands seems to know what it's doing, and the new items look like a winner -- and the timing couldn't be better.

The company had a slow year in 2013, mostly due to things beyond its control such as a poultry scare in China. However, its Taco Bell brand has never been hotter in the U.S., where it accounted for two-thirds of its profits last year.

Yum! Brands is determined to grow earnings per share for the company by 20% this year, and it looks like it may do it.

Remember, this is the company that invented the "fourthmeal." Maybe it's kind of overdue to start serving the first one.

The breakfast table is getting crowded
Taco Bell may be one of the newest entrants to the morning food competition, but it's by no means the only player eyeing a bite of Mcdonald's breakfast business.

Burger King (BKW.DL) has always had a menu of breakfast items available, yet it has had a hard time getting customers to quit their McDonald's morning habit. Still, it's been adding to its menu (it has 18 breakfast sandwiches and burritos) and recently has a gourmet coffee chaser to boot. A recent Burger King promotion was free coffee from Seattle's Best Coffee to customers who purchased one of the chain's breakfast sandwiches.

Jack in the Box (JACK 3.10%) is another burger joint that has long served breakfast all day, usually 24 hours. Now the chain is getting more aggressive by adding new creative and healthy items such as its egg white and turkey breakfast sandwich.

Meanwhile, Subway -- the largest restaurant chain in the world, beating McDonald's by thousands of locations -- has launched all sorts of creative breakfast combination sandwiches with different price points. If nothing else, guests who normally frequent McDonald's may be curious.

Even the traditional coffee chains that were rarely to never seen as breakfast stops are jumping in for a piece of the action.

Starbucks (SBUX -0.01%) is perhaps the most interesting. I've always wondered if this is a huge potential opportunity for it as the morning crowds are usually thick, but few people are eating. Surely at least a decent portion of Starbucks guests would grab a bite to eat, too, if the right temptations are there. But the current offerings of food don't seem to be overly successful.

When pressed during Starbucks' most recent conference call, CEO Howard Schultz teased a bit. He said, "I have only some surprises out there. I'll tell you we've got some great new innovations coming both in that morning category around the savory items and warm items, as well as in lunch." Starbucks fans and investors should pay attention. There could be a bigger wave of growth heading for Starbucks, and if so, McDonald's isn't going to like it.

How serious is the threat?
With 25% of its sales coming from breakfast, and same-store sales in the U.S. showing signs of entering a negative tailspin, should McDonald's be worried by all this competition chomping at its heels?

Certainly the company can't afford to lose much more of its dominance if it wants to keep shareholders happy.

Still, it's hard to bet against McDonald's, the company. But cautious investors may want to wait on the sidelines for a little while and see how all this plays out.