Please ensure Javascript is enabled for purposes of website accessibility
Log In Help Join The Motley Fool
Free Article Join Over 1 Million Premium Members And Get More In-Depth Stock Guidance and Research
By Todd Campbell – Feb 15, 2014 at 9:30AM

Seattle Genetics hopes an international roll-out of Adcetris by its co-developer, Takeda, along with data from ongoing late stage studies, will provide the catalysts necessary for a repeat performance in 2014. 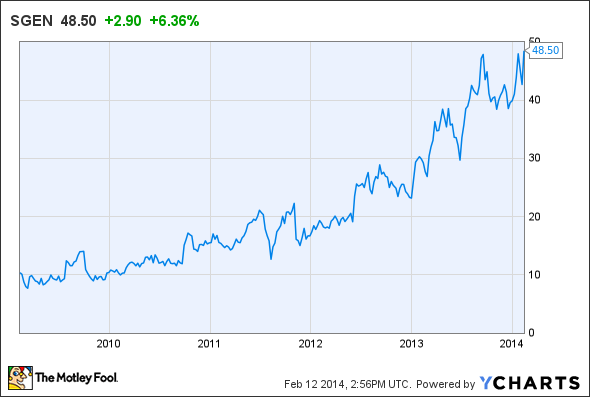 Building a franchise
Adcetris is not only Seattle Genetics' first commercial drug; it's also a great marketing tool for the company's unique antibody drug conjugate technology. The drug, approved to treat relapsing Hodgkin's lymphoma, or HL, and as a second-line treatment for anaplastic large-cell lymphoma, or ALCL, cleared or elicited a response in 73% of HL patients receiving it during trials.

As a result, the drug has captured a roughly 70% market share across its two approved indications, leading to $38 million in sales in the U.S. during the fourth quarter, up from $36 million in the third quarter. Overall, Seattle Genetics sold $145 million worth of Adcetris in 2013.
Takeda is having similar success selling the drug overseas -- good news for Seattle Genetics, since it receives milestones and royalties in those markets. Takeda has won Adcetris approval in 39 countries so far, triggering milestone payments worth nearly $18 million to Seattle Genetics last year.

That rising overseas revenue stream is great news for Seattle Genetics, but a much larger sales opportunity exists if Adcetris' label expands to include more indications. Adcetris is currently used only in HL patients relapsing after both stem cell transplant and two prior chemotherapies. Winning approval as a first line, or as a pre-chemo treatment, would significantly expand Adcetris patient pool given more than 9,000 cases of HL are diagnosed annually, according to the National Cancer Institute.

We'll gain insight into whether Adcetris can address that larger population when results from Seattle Genetics' Aethera phase 3 trial are un-blinded ahead of schedule later this year. In this trial, Adcetris is being evaluated as a pre-chemotherapy option for HL patients who didn't respond to a stem cell transplant. If data are favorable, Seattle Genetics hopes to file for approval in early 2015. Another phase 3 trial is judging whether Adcetris can replace Bleomycin in the most common chemotherapy cocktail used in HL patients.

Partnering for success
Adcetris potential is compelling, but may end up dwarfed by collaborations Seattle Genetics has inked with big pharmaceutical companies, including AbbVie and Bayer.

In AbbVie's case, the company has expanded its relationship with Seattle Genetics twice since the two first linked up in 2011. AbbVie handed over another $25 million up front and promised as much as $255 million in milestone payments per research target in January. If AbbVie can successfully combine Seattle Genetics' ADC technology with its cancer compounds, it will pay Seattle Genetics mid- to high-single-digit percentage royalty on any future sales.

AbbVie's deal is similar to the one cut with Bayer last summer. In that deal, Bayer agreed to pay Seattle Genetics $20 million up front and as much as $500 million in milestone payments if compounds combining Bayer's oncology drugs with Seattle Genetics' technology advance through clinic. Bayer also agreed to future royalties if any drugs covered by the deal are ever commercialized.

Fool-worthy final thoughts
Overall, Seattle Genetics and Takeda have more than 30 trials under way for Adcetris, including four that are in phase 3. This suggests a significant opportunity exists to expand Adcetris revenue.  How big an opportunity remains an area for debate, but during Seattle Genetics' third quarter earnings conference call, the company speculated peak Adcetris sales could someday reach $1 billion a year in the U.S. alone. That suggests investors should focus on Adcetris trial data this year to gauge whether Seattle Genetics' lofty peak sales projections may prove fact or fiction.

Todd Campbell has no position in any stocks mentioned. Todd owns E.B. Capital Markets, LLC. E.B. Capital's clients may or may not have positions in the companies mentioned. Todd owns Gundalow Advisors, LLC. Gundalow's clients do not have positions in the companies mentioned. The Motley Fool recommends Seattle Genetics. We Fools don't all hold the same opinions, but we all believe that considering a diverse range of insights makes us better investors. The Motley Fool has a disclosure policy.

Should You Sell Biotech Stocks If There's a Recession?
351%