Please ensure Javascript is enabled for purposes of website accessibility
Log In Help Join The Motley Fool
Free Article Join Over 1 Million Premium Members And Get More In-Depth Stock Guidance and Research
By Tyler Crowe – Feb 16, 2014 at 8:22AM

It may be a bit of an understatement that the U.K.'s economic development since the financial crisis of 2008 has been sluggish. Since 2010, the United Kingdom economy has seen average GDP growth of 1.4%; not exactly the numbers you want when emerging from a recession. However, there is one thing that has the potential to give the U.K. economy a much-needed boost: shale gas. Let's take a look at what the U.K. has and whether it could jump-start the economy.

Could we start to see more drilling rigs like this in the English countryside?  Source: geograph.org.uk

It's no secret anymore that the U.S. has unlocked vast quantities of natural gas through hydraulic fracturing. What many don't seem to completely appreciate, though, is the impact this gas has had on gas prices relative to other energy sources. For decades prior to the shale gas boom, the price of natural gas followed oil prices almost in lockstep based on their energy equivalency -- 1,000 cubic feet has 1/6 the energy of a barrel of oil, so it traded at a price about 1/6th of oil. Once the shale boom took off, though, that dynamic has completely changed. 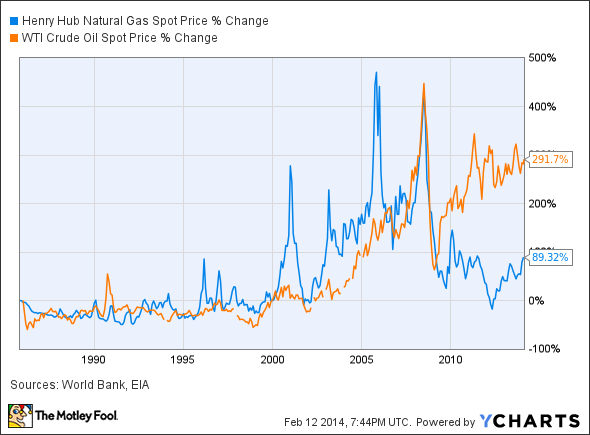 Today, natural gas prices are about 1/22nd the price of oil. And that major price difference can go a long way.

To understand the potential of what vast quantities of shale gas can do for an economy, look no further than what is going on in the U.S. today. Not only is cheap natural gas leading to conveniences such as cheaper energy bills, but it is also spurring billions and billions of dollars in investment. The American Chemical Council estimates that cheap natural gas will lead to businesses investing almost $72 billion on plants and facilities that would use natural gas as either a chemical feedstock or as an energy source. On top of that, there have been other massive investments using natural gas ranging from steel manufacturing, liquefied natural gas (LNG) exports, and even natural gas to gasoline.

For the U.K., a cheap, domestic source of natural gas could do wonders for the economy. The country is highly dependent on natural gas imports from Norway's Statoil (EQNR 2.31%), which provides more than 25% of the nations natural gas. Also, the price for energy has always been a challenge for the island nation. The NBP spot price for gas -- the equivalent to the Henry hub spot price here in the U.S. -- is around $9.50 per thousand square feet of gas, more than double the prices we currently play in the U.S.

Tempered expectations
There hasn't been much exploration and appraisal work on U.K. shale thus far, but the initial assessments point to some very promising things for the country. The British Geological Survey estimates that there are 1.3 quadrillion cubic feet of potential gas on U.K. soil. If we were to assume that 10% of that is recoverable -- what we are getting with U.S. shale -- that means the U.K. has 130 trillion cubic feet of technically recoverable resources. This would be enough to supply the entire nation's demand for 40 years, or enough to replace its current import demand for 100 years.

One word of caution before celebrating a coming boom in the U.K.: Shale gas extraction is still in its infancy in the U.K. To date, there are only 40 to 50 wells planned to be drilled over the next two years. Also, Total (TTE 0.58%), the only major oil company to sign on to explore for shale gas thus far, is only expecting to spend about $80 million on U.K. shale over the next two to three years. That may sound like a big number, but it's pennies compared to the company's annual capital budget of about $25 billion. To put these numbers further in perspective, U.S. companies spent more than $33 billion on shale gas extraction and infrastructure development in just 2010, and total development costs between 2010 and 2035 are expected to reach $1.8 trillion.

What a Fool believes
The potential is there for shale gas in the U.K. to give the economy a decent shot in the arm. It also could help the country establish a level of economic superiority over several other European nations who have put moratoriums on the practice of hydraulic fracturing. However, the chances of this transformation happening within the next couple of years or so are very slim. It took over a decade between when Mitchell Energy's first commercially viable shale gas well was completed and large-scale adaptation of the practice across the U.S., and it is very possible that the U.K. may need to wait just as long until shale gas takes off there as well.

The Motley Fool recommends Statoil (ADR) and Total SA. (ADR). We Fools may not all hold the same opinions, but we all believe that considering a diverse range of insights makes us better investors. The Motley Fool has a disclosure policy.