Gunmaker with a near 200-year history in the Empire State will expand operations in Alabama.

Less than two weeks after gunmaker Beretta beat feet out of Maryland following the state's adoption of restrictive gun laws, another firearms manufacturer is chosing to vote with its feet and abandon a state harboring animosity toward gun freedoms.

Remington Arms has called Ilion, N.Y., home since its founding in 1816, employing some 1,200 people in the process, but when it builds a new manufacturing facility with some 2,000 new jobs it won't be in the Empire State where they're created, but rather the Heart of Dixie, Alabama, that will reap the bounty.

Such moves are becoming commonplace now. In the wake of the Sandy Hook school shooting, a number of states moved to restrict the ownership or manufacture of firearms. Colorado, for example, adopted a set of laws that, among other things, made it illegal to sell magazines that hold more than 15 rounds. In addition to the recall of two state legislators who voted in favor of the laws, it also had the effect of causing the respected Magpul Industries to leave the state for Texas. PTR Industries left Connecticut for South Carolina, Kahr Firearms abandoned New York for Pennsylvania, and Stag Arms has said it will expand outside Connecticut.

Even the big guns in gunmaking, Sturm, Ruger (RGR -0.58%) and Smith & Wesson Holding (SWBI -1.61%), are taking hardcore stands on the issue. Ruger will be making its first major expansion in 25 years not in Connecticut, where it's been located since 1949, but in North Carolina, and both Ruger and Smith & Wesson will stop selling semiautomatic weapons in California because of that state's newly enacted law requiring "microstamping," the embedding of a unique code on a gun's firing pin that gets "stamped" on a bullet casing when fired.

While Remington did announce a $20 million expansion in Ilion last year after it scored an $80 million Defense Department contract, the latest move is notable if for no other reason than New York Gov. Andrew Cuomo has made increasingly incendiary remarks about gun owners. In his state of the state address last year, Cuomo called some of them "extremists" who could see their legally owned firearms confiscated, while earlier this month he again equated so-called "assault weapon" gun owners with extremism and said they had "no place in the state of New York."

The problem with such language, aside from its divisiveness, is there is no such thing as an "assault weapon." What they're riled up over are merely cosmetic accessories that have no impact on functionality or lethality. An AR-15, the most popular kind of gun often referred to as an "assault" rifle, is no different from your standard hunting rifle except for the addition of scary-looking barrel shrouds, folding stocks, and pistol grips. The gun still fires the same; it just looks different (the "AR" in the model name doesn't mean "assault rifle," but rather "Armalite rifle," a gun based on the designs of the ArmaLite small arms engineering company).

Despite its popularity and politicians' fixation on it, the rifle is used in fewer crimes than other more common household items, like knives or hammers. In fact, hands, fists, and feet are used in twice as many murders as rifles. Overall, violent crimes with guns have been on the decline for years, and the murder rate by guns is at its lowest point since at least 1981, according to FactCheck.org. And all of that is occurring as gun ownership has increased. 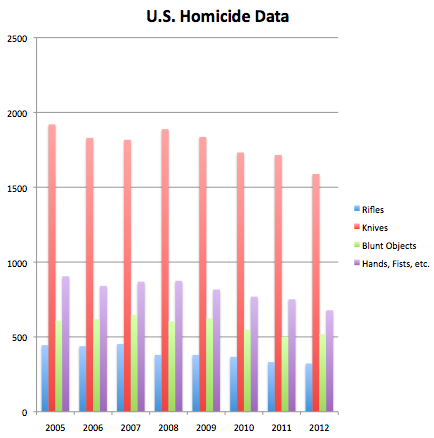 Stag Arms has now come out with a "New York-compliant" AR-15 that just slightly modifies the traditional design to skirt the state's gun ban, but also highlights that all that was banned was merely cosmetic in nature. Stag Arms also offers configurations on other rifles to comply with various state laws, often for a modest additional charge. For example, it added a "bullet button" to one weapon that uses the tip of a bullet to eject an empty magazine to get around California's ban on detachable magazines that are removed by using your finger.

All of which goes to show why manufacturers are moving to or expanding in states that are friendlier to their businesses. The Remington 870 shotgun is arguably among the greatest shotguns ever made, but with more than 10 million sold since 1951, it's certainly the most popular of all time. With the likely reduction in workforce in New York, Remington's great heritage will now become the legacy of Alabama, and indicates the dam is breaking open and other gunmakers will flood states more conducive to their growth.

Rich Duprey owns a Remington 870 shotgun but has no position in any stocks mentioned. The Motley Fool has no position in any of the stocks mentioned. Try any of our Foolish newsletter services free for 30 days. We Fools don't all hold the same opinions, but we all believe that considering a diverse range of insights makes us better investors. The Motley Fool has a disclosure policy.

Are There Buying Opportunities in the Industrial REIT Space?