On Feb. 2, shares of RadioShack (NYSE: RSH) experienced a sudden price increase after the company aired one of the best Super Bowl ads of 2014. The company's ad showed 80's icons taking away old technology from RadioShack's stores. After emptying the store, Hulk Hogan, Alf, and other celebrities introduced a new, modern store which suggested that a new RadioShack is in the making.

RadioShack's ad let consumers know the company's willingness to shaking things up by turning its old-fashioned stores into fun, modern, and interactive places. After all, a big change in image may be needed to turn around RadioShack's business. Despite being part of the American retail landscape for more than 80 years, the company has recently been struggling with poor top line performance as customers continue acquiring more tech devices through online retailers. Revenue has actually decreased since 2010--just in the third quarter of 2013, the top line declined 10%; this resulted in negative earnings before interest and taxes. In this difficult context, can RadioShack stop bleeding cash and save its business? 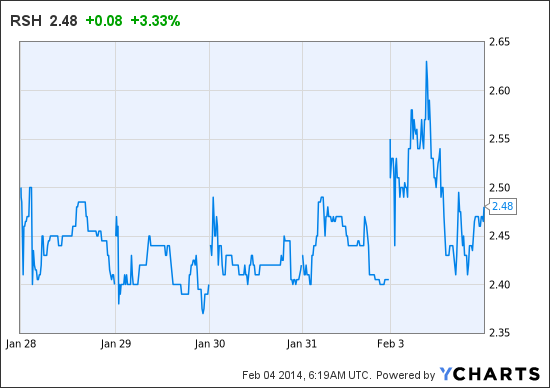 Learning from Best Buy
First, it's important to acknowledge that, contrary to the common belief that e-commerce will end up killing traditional retail, retailers with physical stores can survive. E-commerce companies usually employ an aggressive pricing strategy to capture market share, which means that the key to survival is differentiation. A great example is RadioShack's competitor Best Buy (NYSE:BBY).

To save its business from bankruptcy, Best Buy announced a massive turnaround plan called "Renew Blue." The plan included an expansive assortment of products, a customer-centric store space redesign, and several cost-reduction measures. These changes were made in order to differentiate the chain from online retailers, which compete largely on price.

For example, Best Buy started "renting" space within its stores to tech manufacturers such as Samsung or Microsoft. The results were outstanding, with Best Buy shares going up more than 200% last year. The company managed to deliver increases in comparable-store sales after several years of no growth and rumors of bankruptcy.

Transforming the brand
Like Best Buy, RadioShack needs a sound turnaround plan to save its business. One of the main challenges that the company must go through is the renewing of a brand that is already settled in the customer's head. There is no doubt that the company is well regarded by some fans, but many see it as outdated.

To renew its brand, RadioShack plans to remodel its stores by turning them into interactive places that provide a fun buying experience for customers. The new stores may present interactive displays, which customers can use to try in-demand brands. Stores will also be equipped with touchscreens, apps that help shoppers understand the benefits of products, and store fixtures than enable shoppers to compare brands. RadioShack is opening a select number of these high-touch stores in high-traffic, high-profile locations.

Differentiation is key
By redesigning interiors and adding touchscreens and interactive product displays, RadioShack aims to provide customers with an enhanced buying experience. This is something that online retailers cannot provide. If the company succeeds in providing a valuable buying experience to its customers, it will survive the online retailers just like Best Buy did.

At the same time, RadioShack needs to close some stores as part of a big restructuring plan that involves improving capital utilization, optimizing store distribution, and replacing old-fashioned locations with new-concept stores. Not surprisingly, the Feb. 4 edition of The Wall Street Journal reported that the company is closing 500 stores. Hopefully, RadioShack is sacrificing the quantity of stores to improve the quality of each and every one of them.

Final Foolish takeaway
RadioShack's Super Bowl ad could be seen as a signal that the company is well aware of the urgent need of a brand renewal. Long term, it seems that the company aims to provide a fun, interactive buying experience through its new concept stores as a way of differentiating itself brand from online retailers. The Super Bowl advertising campaign was a good way to start the process of brand renewal.