Please ensure Javascript is enabled for purposes of website accessibility
Log In Help Join The Motley Fool
Free Article Join Over 1 Million Premium Members And Get More In-Depth Stock Guidance and Research
By Keith Noonan - Feb 16, 2014 at 7:00AM

Nintendo's latest platform looks to be a failure of epic proportions. Can the games in Wii U's sparse first-quarter lineup create some much-needed momentum?

If anyone is still uncertain about the future of Nintendo's (NTDOY -1.52%) Wii U, a look at the system's upcoming software lineup should make things pretty clear. While company President Satoru Iwata has repeatedly stated that Nintendo understands the problems inherent to software droughts, it's apparent that this recognition has not helped the company create a suitable lineup for its system. These are the five Wii U games with firm first-quarter 2014 dates attached. The list includes both retail and downloadable titles.

The LEGO movie videogame
Developed by TT Games and published by Time Warner (TWX), this game has already hit store shelves in conjunction with The LEGO Movie. Games in the "LEGO" series were a big hit on last generation's Wii console. The property is a natural fit for the family centric audiences that Nintendo's platforms tend to attract. While reviews of the game's Wii U version are hard to come by, the Sony PlayStation 4 version of the title currently has a respectable 75% critical average on Metacritic.

Since the Wii U's debut, Warner has been one of the system's biggest and most steadfast supporters. The company will also release LEGO The Hobbit early in the second quarter of 2014, but there are signs that the publisher will limit its future Wii U output. An upcoming downloadable content expansion for the Wii U version of Batman: Arkham Origins was recently canceled. Warner may continue to support the platform with family games, but it looks like the company's other properties will ignore the platform going forward. 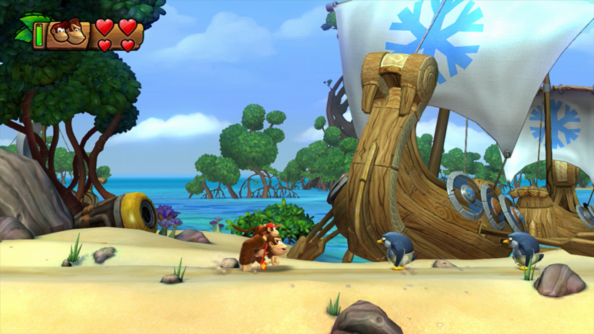 The latest installment of the legendary "Donkey Kong" series marks the return of the great ape and his family of platforming monkeys. Developed by Retro Studios, the unit behind the esteemed "Metroid Prime" series and 2010's well-received Donkey Kong Country Returns, the game should deliver a high-quality genre experience. The differences in install base and platform momentum make it very unlikely that Tropical Freeze will approach the sales of its predecessor. That said, Nintendo should heavily promote the Wii U's lone remaining first-quarter retail release if it hopes to keep the system alive for the releases of Mario Kart 8 and Super Smash Bros.

It's worth noting that Donkey Kong: Tropical Freeze makes sparse use of the Wii U's GamePad controller. President Iwata has stated that the company will concentrate on delivering compelling uses of the system's defining feature in the coming year, but Retro apparently didn't get that memo. Check out this article for more information on Tropical Freeze's under-use of Wii U's GamePad and what it might mean for the system at large.

Citizens of Earth
What's that? You've never heard of Citizens of Earth? Don't feel bad. With that glorious introduction, this list of year's first-quarter Wii U games dips into content that even most gaming enthusiasts have never heard of. Featuring a sprite-based art style and turn-based game play, the game takes inspiration from Nintendo's own Earthbound.

Developed and published by little-known Eden Industries, the game is slated for release as a downloadable title on March 14. A retail release is highly unlikely.

Pier Solar HD
Pier Solar HD is yet another downloadable title destined to be roundly ignored by the vast majority of the gaming public. Scheduled for a March 25 eShop release, the game harkens back to the days of old school RPGs. In fact, the game is an HD remake of a game that was originally developed for the Sega Genesis. The game is coming to the Wii U thanks to a Kickstarter campaign that exceeded a fundraising goal, made by industry-unknown WaterMelon Company.

Shovel Knight
Developed by indie team Yacht Club Games, Shovel Knight is the third download-only title on this list. It's also the third title on this list to make use of retro graphics, sporting an eight-bit art style that should make dedicated fans of the NES feel right at home. The game is currently slated to hit the eShop on March 31. The title will also release on Nintendo's DS, as well as Microsoft Windows, Linux, and Apple Mac OS X-based computers.

There you have it: the Wii U's first quarter 2014 lineup. It's possible that the above list omits a small title or two. Some sources suggest that an Android game called Jett Tailfin will hit the system in March, however a Wii U version of the game has yet to be rated by the ESRB.

How did we get here? Take a look at this Satoru Iwata quote from 2002, courtesy of an interview with Spong: "The GameCube has been well received by the development community, but we don't believe in overwhelming third party support." In June of 2013, Iwata once again downplayed the importance of third party support in driving Wii U adoption. The results of this strategy are obvious.

Keith Noonan has no position in any stocks mentioned. The Motley Fool recommends Apple. The Motley Fool owns shares of Apple and Microsoft. Try any of our Foolish newsletter services free for 30 days. We Fools may not all hold the same opinions, but we all believe that considering a diverse range of insights makes us better investors. The Motley Fool has a disclosure policy.