The labor force participation of American men has been decreasing since before 1950.

The labor force participation rate moved up slightly in January, to 63% from an achingly low 62.8% in December. This metric has been sliding since the advent of the Great Recession, and though the uptick in the number of employed persons and those actively looking for work is welcome, the most recent ratio looks anemic compared to the 66.2% recorded in January 2008.

For male workers, the participation rate has suffered more acutely, dropping by 4.3 percentage points since early 2008, to its present 68.6%.

But the economic crisis isn't entirely to blame for the decreasing participation of the American man in the workforce. He has been dropping out at a consistent pace for decades, beginning shortly after World War II. 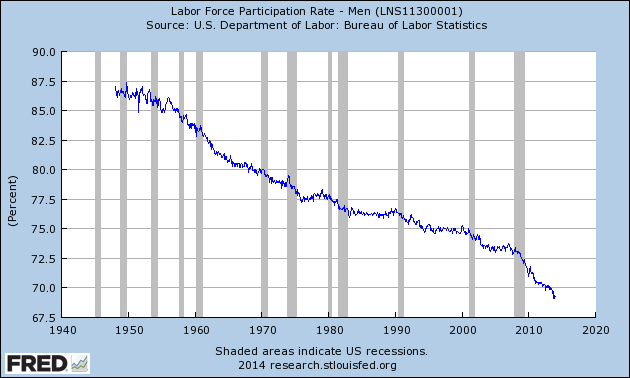 A steady decline in working men
As this chart from the Federal Reserve Bank of St. Louis clearly shows, men have been slowly, but surely, exiting the workforce since the late 1940s. According to the Bureau of Labor Statistics, the labor participation rate of American men averaged 86.6% in 1948, and a measly 69.7% for 2013.

This trend has not gone unnoticed. A BLS report in 1997noted men were working much less than women, with workforce participation rates of 75% for the former and 60% for the latter. While women have also seen their rate of participation decline since the recession -- women averaged a rate of 59.5% for 2008, versus 57.2% for 2013 -- their rate has increased greatly since 1948, when the average labor participation rate for female workers was a paltry 32.7%.

What's going on?
Many have questioned why the population of male workers is in an unrelenting decline, and several theories have been floated. One scenario, of course, is the increasing number of womenentering the workforce. This doesn't explain the fact that women did not hit the 40% labor force participationrate until 1966, though, by which time men had already decreased their own rate of workplace participation by 6.2 percentage points from 1948.

Another theory posits that men are falling behind women in the attainment of high school and college diplomas, thus relegating them to less lucrative occupations. There may be something to this theory. 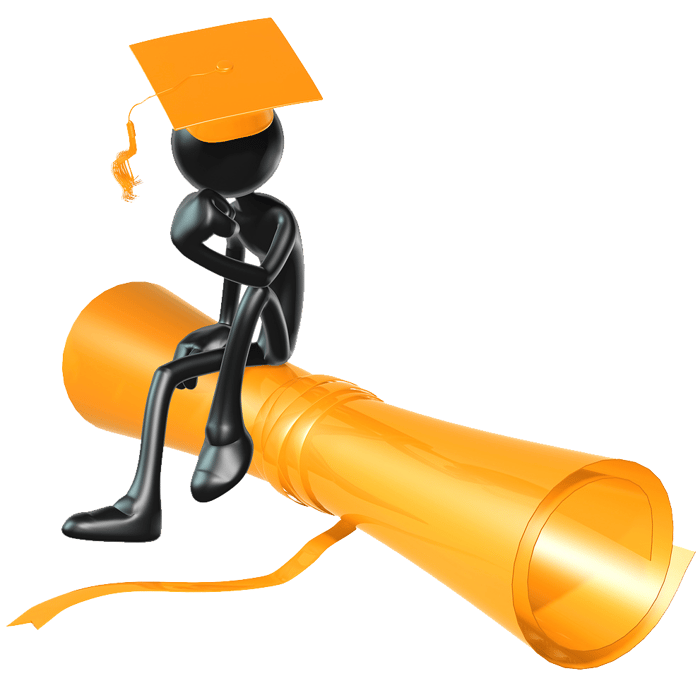 In 1977, the number of bachelor's degrees earned by women was less than that of men, who collected 494,000 diplomas compared to the 423,000 conferred upon women. This has changed, however: Men graduating with bachelor's degrees in 2011 numbered 734,000 while the women handily beat them by garnering almost 982,000 diplomas.

Other analysts feel the problem lies more with a lack of opportunities in the job market, combined with a general unwillingness of employers to hire new workers. This seems very plausible to me -- after all, both genders have suffered from a noticeable drop in labor force participation since the last recession. The trouble may lie less with workers, regardless of gender, and more with an economy still struggling to shake off the effects of a hard-hitting global downturn.

Part of this predicament is due to the stigma attached to the long-term unemployed, a population that is increasingly becoming marginalized when it comes to hiring. Hopefully, the attention being brought to the plight of these workers -- combined with a brightening economy -- will help both genders regain the employment-related losses they have endured over the past six years.

These Are the 3 Worst-Performing Stocks in Warren Buffett's Portfolio This Year. Should You Buy Them in 2023?
371%