Please ensure Javascript is enabled for purposes of website accessibility
Log In Help Join The Motley Fool
Free Article Join Over 1 Million Premium Members And Get More In-Depth Stock Guidance and Research
By Dave Koppenheffer - Feb 17, 2014 at 8:00AM

US Bancorp CEO Richard Davis gave investor a myriad reasons to like the outlook for U.S. Bank. Here are five of the most important.

Warren Buffett's favorite bank, at least according to its residence atop the Berkshire Hathaway equity portfolio, is Wells Fargo (WFC -1.71%). Accounting for just over 3% of Berkshire's portfolio, U.S. Bancorp (USB -0.82%) is Berkshire's second largest bank holding.

Along with having Warren Buffett's endorsement, U.S. Bancorp has made a name for itself as one of the best-run U.S. banks.

1. A history of quality loans
According to the Office of the Comptroller of Currency, banks are slowly starting to ease underwriting standards.

The question is, which banks do you trust to make smart loans when the getting is good?

As Warren Buffett has said, "It's only when the tide goes out do you discover who's been swimming naked."

While we can hope banks, like Bank of America (BAC -2.21%), have learned a lesson from the financial crisis, it's easy to trust banks like U.S. Bancorp and Wells Fargo, which have proven a history of better loan practices.

2. A strong capital position
As we approach the CCAR, it will be the banks that have strong capital ratios that will have the ability to increase or maintain their dividends and share buybacks. 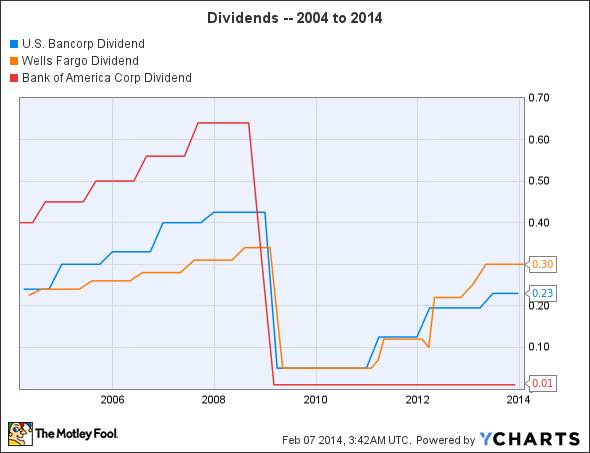 U.S. Bancorp, according to Davis, "[R]eturned $4 billion or 71% of our 2013 earnings to our shareholder in the form of dividends and buybacks."

We'll see how new regulations (Basel III) shake out, but it's hard to imagine any problems for U.S. Bancorp or Wells Fargo. Bank of America, however, will be a more interesting story.

All three banks have made huge strides when it comes to adding deposits. Bank of America and Wells Fargo clearly smoked U.S. Bancorp in total deposits, but pound for pound, U.S. Bancorp has gained the most ground.

4. Strong earnings despite a decline in revenue
It's no secret the banking industry is facing revenue headwinds, though it offers investors an opportunity to pick out the greatest survivors.

According to Davis, U.S. Bancorp's mortgage banking revenue and noninterest income both took significant hits in 2013.

The company, however, was able to counterbalance some of these losses through "growth in retail payments, merchants processing, trust and investment management fees, deposit services charges, commercial products revenue, and investment product fees."

U.S. Bancorp also has one of the best efficiency ratios in the industry and has proven its ability to wade through a tough environment.

5. Growth potential
"We continued to invest in our businesses throughout 2013 both organically and through acquisitions."

U.S. Bancorp has continued to make small strategic acquisitions in 2013. While some, including yours truly, think U.S. Bancorp could be very successful as a national bank, Davis has been firm in his position to dominate the company's current footprint before expanding further.

Profitable growth is extremely difficult -- and you just have to ask Bank of America about how the Countrywide acquisition is working out to understand that fact.

U.S. Bancorp is simply unwilling to make subpar acquisition simply to speed up the banks growth. And I firmly believe that when that times comes, U.S. Bancorp will make a Wachovia-type acquisition and will force its way onto the national stage.

Which bank is the best buy?
Bank of America's current valuation is still very favorable, and I have been consistently bullish on the future of Wells Fargo.

With that said, while U.S. Bancorp is trading near three times tangible book value, it has earned its valuation, and if you're looking to invest in a quality bank with good growth potential that will distribute earnings to shareholders U.S. Bancorp may prove to be the best investment of the bunch.