Please ensure Javascript is enabled for purposes of website accessibility
Log In Help Join The Motley Fool
Free Article Join Over 1 Million Premium Members And Get More In-Depth Stock Guidance and Research
By Daniel B. Kline - Feb 17, 2014 at 9:19AM

While Facebook has one foot in mobile and one in conventional computers, Twitter is largely a mobile company with almost no user engagement on PCs.

Without smartphone users of its app, Twitter (TWTR -0.92%) would barely exist.

According to data collected by Nielsen, the social media network's users spent an average of 3 minutes and 7 seconds on the company's mobile app each month, but only 36 seconds using Twitter on a computer. Facebook (META -2.57%), which has been succeeding in getting users onto its mobile platform, has a much more balanced user base -- its customers spend 6 minutes and 24 seconds per month using the site via computer and 7 minutes and 43 seconds each month using its app. 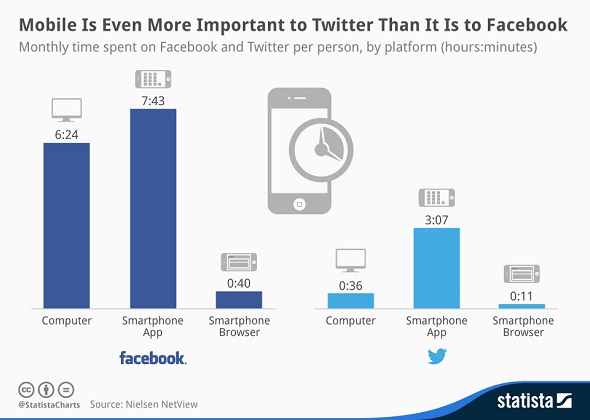 Follow the mobile money
With overall PC use and sales declining while smartphone and tablet sales grow, the above data is not quite as disastrous for Twitter as it would have been a couple of years ago. Twitter, according to the company's fourth quarter 2013 financial report, had $220 million in advertising revenue; this was an increase of 121% year-over-year. Of that $220 million, 75% of it was mobile advertising. Twitter lost $511 million for the quarter, up from $9 million for the same quarter last year. Much of that loss was due to a one-time charge related to the company going public, however.

Emarketer, which tracks the mobile advertising market, reported in August 2013 that Google (GOOGL -1.77%) controls more than half of the $16.65 billion mobile ad market. Facebook is gaining share, however, as is Twiiter. According to Emarketer, Facebook began the year with 5.35% of the market and was projected to end 2013 with 15.8% share. Twitter's gain was less dramatic as it was projected to climb from 1.57% to 1.85%.

Twitter at a crossroads
Facebook, which faced concerns over its ability to monetize mobile customers at the time of its IPO, has successfully answered those arguments. As you can see from the chart above, the company has also done a good job making the site as a useable product on whatever computing device users might access it from.

The same cannot be said of Twitter, as its PC audience barely exists. This makes either reversing that trend or continuing to grow its mobile user base and engagement essential. One possible way to change course is a rumored radical redesign that would make Twitter a lot more like Facebook.

According to an article in The Los Angeles Times, Twitter has begun testing radical new design that looks a lot like rival social media sites Facebook and Google+. The redesign, which has not been announced by the company, "is currently only visible to a few users of the social network, places a bigger emphasis on users' header photos, which are the images located behind their profile photos," reported the Times.

The new design, according to the Times, also has a few other changes:

Of course, a secret test of a new design may just be a test, but testing something so radical suggests that Twitter's leaders know that they have a broken product that's essentially non-existent in the PC world and less engaging than Facebook on mobile. Changing that is not impossible, but as we have seen with so many social media networks before, today's Facebook can easily become tomorrow's Friendster.

Daniel Kline has no position in any stocks mentioned. The Motley Fool recommends Facebook, Google, and Twitter. The Motley Fool owns shares of Facebook and Google. Try any of our Foolish newsletter services free for 30 days. We Fools may not all hold the same opinions, but we all believe that considering a diverse range of insights makes us better investors. The Motley Fool has a disclosure policy.