Insiders owning a lot of company stock is often a good sign. These three Dow Jones stocks have nearly no insider ownership.

Insiders owning a lot of company stock is often a good sign. But these three Dow Jones Industrial Average (^DJI 0.45%) stocks have nearly zero insider ownership. What does that mean for investors?

Only 0.03% of Johnson & Johnson (JNJ 0.13%) shares are in the hands of company insiders such as board members and J&J executives. No, that's not a typo -- we're talking about roughly one-thirtieth of 1%.

To put these figures into perspective, note that the Dow's average insider ownership is 1.5% these days. A year ago, 1.1% of the current 30 Dow stocks belonged to insiders. Even worse, that amount stood at 0.04% a year ago. Johnson & Johnson's insider involvement is not just low, but it is also shrinking 25% year over year.

The small insider stake is on autopilot. No J&J director or executive has bought shares on the open market since 2011, when independent director and ex-Wrigley CEO William Perez bought 2,000 shares. Otherwise, J&J insiders have only exercised options to get their hands on more shares.

But all is not lost. The health care giant's insiders might not be putting their own money into the stock, but J&J has stepped up its corporate share buyback program in a big way recently: 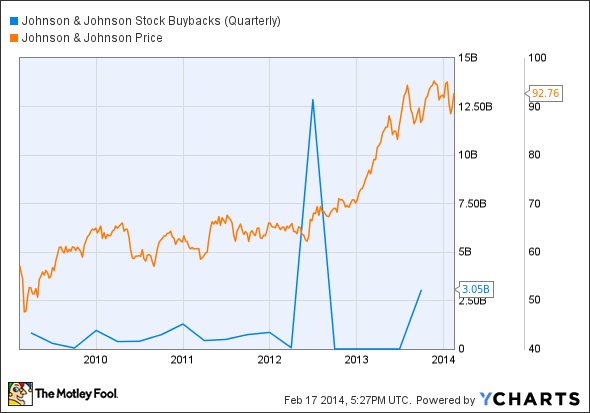 The buybacks spiked by $12.9 billion in 2012, with most of the action falling in the second quarter. J&J took on $4.5 billion in long-term debt to help finance this move. Share prices have surged more than 30% since then, so it's hard to call it a bad deal. And J&J is doing another round of respectable buybacks right now.

Maybe Johnson & Johnson's management isn't hating this stock after all. It just prefers to bet on the company in a different way.

How about oil giant Chevron (CVX -0.29%)? Only 0.02% of Chevron shares sit in insider portfolios, down 9% from a year ago. Their combined stakes add up to $49 million out of Chevron's gargantuan $218 billion total market value.

Maybe that's what you get in companies with centennial histories. Chevron has been around for 135 years in one form or another, and it's safe to say that the company's founders aren't deeply involved anymore.

That said, Chevron isn't sending strong signals via share buybacks, either. The company bought and retired $6.8 billion worth of shares in 2008, before hitting the brakes hard during the global economic meltdown. The most recent 12-month buyback data shows just $4.5 billion invested in Chevron itself.

This could be a real case of management losing hope for Chevron's future. The stock has underperformed the Dow over the last five years and should be ripe for an opportunistic buyback similar to Johnson & Johnson's 2012 action. But it isn't happening. 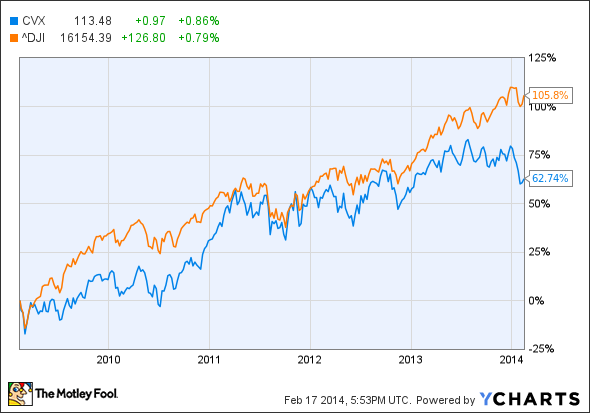 What about Verizon Communications (VZ 0.26%)?

This is the smallest insider ownership stake on the Dow, with only 0.016% of shares held by the telecom's own people. On the upside, that's a 23% improvement from a year ago, when the ratio stood at 0.013%. On the downside, it's just $21 million of Verizon shares. Keep this number in mind as we look at Verizon's buyback action.

Verizon has bought back a measly $153 million (not billion) of company stock over the last five years, while also diluting the share pool by $631 million of freshly minted shares. That negative buyback trend will continue if the proposed cash-and-stock deal to grab full control of Verizon Wireless from longtime partner Vodafone (VOD 2.08%) is approved.

Taken together, these trends look like Verizon's leadership admitting that its stock doesn't feel like a solid investment. Verizon is taking advantage of its high market value to get the Vodafone deal done while the good times last; maybe there's a sunnier side of the rainbow when Vodafone bows out, but nobody here is betting big on that outcome.

The Foolish takeaway
Of the Dow's three smallest insider holdings, Johnson & Johnson offers the best excuse for its soft insider action. The numbers make me nervous about Verizon's and Chevron's market prospects.