Please ensure Javascript is enabled for purposes of website accessibility
Log In Help Join The Motley Fool
Free Article Join Over 1 Million Premium Members And Get More In-Depth Stock Guidance and Research
By Lior Cohen - Feb 17, 2014 at 10:14AM

A recent recovery in the gold market has also spurred a rally in Yamana Gold. Is this gold producer a worthy investment?

The recent recovery in gold prices may lead to strengthened demand for precious metals miners. But besides the obvious effect gold prices have on gold producers such as Yamana Gold (AUY -0.00%) and Goldcorp (GG), other factors should also be considered, including growth in production, profitability, dividends, and valuation. Let's take a close look at Yamana Gold and determine if these criteria make this company an investment worth considering now that gold is slowly regaining the confidence of investors.

Gold production may rise again in 2014
Yamana's early estimates were for a 27% gain in precious metals production during 2013 to reach 1.5 million gold equivalent ounces, or GEO. But the sharp drop in bullion prices has reduced the company's production volume, as stated in its quarterly earnings report: "In response to the current volatile gold price environment which puts margins at risk, the Company has initiated cost containment and margin reclamation initiatives to focus on quality of ounces produced measured by contribution to cash flows instead of production volume alone." Thus, the company's production remained nearly unchanged compared to 2012 and reached only 1.2 million GEO. Looking forward, however, the company projects its 2014 production will rise by 17% to reach 1.4 million GEO.

Profitability
The drop in gold and silver prices has slashed the profit margins of gold producers in the past several quarters. The operating profit margins presented below are without goodwill and impairment provisions. 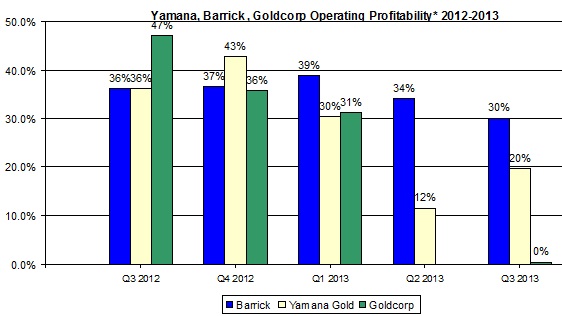 As you can see, Barrick has the highest profit margin of the three in the past several quarters, though it doesn't offer the highest dividend yield of the group.

Valuation
The table below presents Yamana's, Barrick's, and Goldcorp's enterprise value-to-EBITDA ratio; the figures don't account for goodwill and impairment provisions, which were recorded during 2013. Barrick decided to revise its assumptions on the price of gold down to $1,300 per ounce when valuating its assets. As a result, Barrick recorded an $8.7 billion impairment provision in the second quarter of 2013. Goldcorp also revised its assumptions on the price of gold and recorded a $2.5 billion impairment in the second quarter. Conversely, Yamana Gold kept its gold price assumptions unchanged.

As you can see, Yamana's EV-to-EBITDA ratio is the highest at 12.6, while Barrick's ratio is the lowest at 5.1. The precious metals industry average is 5.4. This means that Yamana's current pricing seems a bit high compared to its peers. One reason for the high valuation could be the expected sharp rise in production. But since Goldcorp's production is projected to rise at a similar pace to Yamana, this makes Yamana's shares appear overpriced.

Takeaway
The recent recovery of the gold market may steer investors back to gold producers. Yamana has some strong points, such as a relatively high dividend yield (for the precious metals industry) and the potential sharp rise in production in 2014. But the company's current valuation seems a bit high, and for a similar dividend yield and growth in production, Goldcorp might be a better investment worth considering.