Please ensure Javascript is enabled for purposes of website accessibility
Log In Help Join The Motley Fool
Free Article Join Over 1 Million Premium Members And Get More In-Depth Stock Guidance and Research
By Reuben Gregg Brewer – Feb 18, 2014 at 11:12AM

The big news in the propane market has been the price spike caused by cold weather, but that's not the news you should be paying attention to.

Horizontal drilling and hydraulic fracturing have created an abundance of oil and gas in the United States. However, it's also led to an increase in propane. That could turn this seemingly moribund business into a growing industry again, particularly if exports continue to gain steam.

The unloved stepchild
Propane, a byproduct of oil and natural gas processing, is something of an afterthought in the U.S. energy industry. The closest most people get to the fuel is their backyard barbeque. But it's a highly functional product, powering everything from the grill to small vehicles to home heating equipment. Agriculture is a key market in the United States because propane is often used to dry crops like corn.

The recent weather has brought the fuel to the attention of investors because low stockpiles and increased heating demand led to an astronomical price spike. Although no one likes to see the cost of the fuel they use jump by a third in just a few weeks, the price is already coming back to Earth. 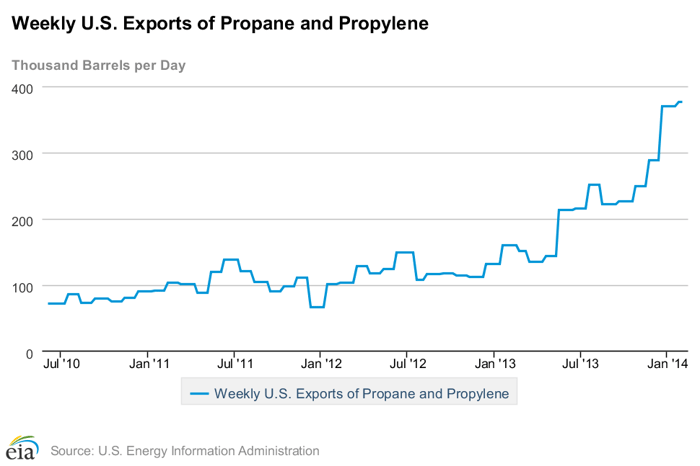 Propane and dividends
There are different ways to play the propane market. Dividend investors will probably be most attracted to U.S. distributors like Suburban Propane (SPH -0.73%), AmeriGas (APU), and Ferrellgas (FGP). Each of these limited partnerships has a yield in the 8% area. Notably, they have been consolidating the U.S. propane industry for years.

For example, Suburban Propane purchased Inergy's propane business in 2012, freeing that company up to transform itself into a pipeline company (it changed its name after a subsequent acquisition). Suburban's market presence went from 30 states to 41. AmeriGas, meanwhile, bought Heritage Propane in 2012, augmenting its scale—it has operations in all 50 states, which indeed includes hard to reach Hawaii and Alaska.

Ferrellgas, which also has operations in every state, has been less aggressive with big acquisitions. Instead, it's continued to focus on smaller buys. For example, it acquired or is in the process of buying Mr. Bar-B-Q, Western Petroleum, KanGas, and Motor Propane Service. This difference, however, points to the future for Ferrellgas, AmeriGas, and Suburban.

AmeriGas is the largest player, Ferrellgas weighs in at number two, and Suburban is third. Taken together, they control about 30% of the market. The rest is largely made up of smaller players—about 5,000 of them. So look for acquisition led growth to continue.

How do they benefit?
The real opportunity is in the combination of two trends: industry consolidation and systemically higher prices. Consolidation alone is interesting, but not particularly exciting now that the number of big players is down to three. Growth will come from continued acquisitions, but it will be a slow and steady process that's unlikely to excite investors.

So long as export demand remains high, however, U.S. propane companies have the potential to improve their margins. That will help compound the benefit of purchasing smaller competitors which lack the purchasing power of the big three.

Don't expect the export trend to change unless the government gets involved in a big way. Right now, there are limits placed on oil and natural gas exports that propane doesn't have to deal with. It's a fuel that can be exported with relative ease, which helps explain the drastic increase in exports. Although not a direct one-to-one benefit, look for continued improvement in the propane outlook for AmeriGas, Ferrellgas, and Suburban as they increase their scale by consolidating a fragmented market.