Inovio, Dynavax, and Ariad are three biotech stocks that deserve a second look this year. Here’s why.

Inovio's big catalyst could be right around the corner
Inovio (INO -5.47%), which doesn't have any marketed products, has already soared more than 270% over the past 12 months on optimism regarding its pipeline. 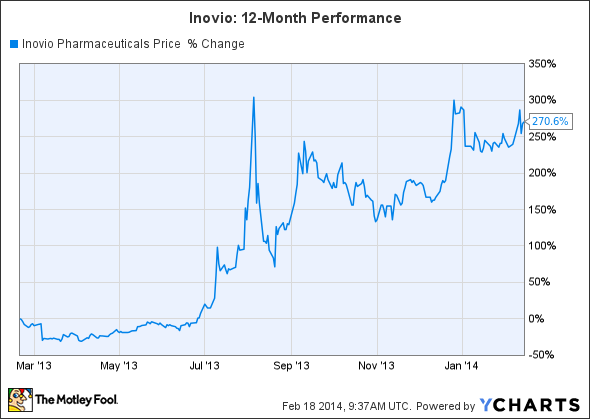 The company specializes in immunotherapy vaccines that target cancer, HPV, and other diseases by provoking an immune system response with synthetic DNA. The vaccines are delivered into the patient's body via Inovio's proprietary electroporation technology, which uses brief electrical pulses to boost cellular intake. Inovio (INO -5.47%) generates revenue from various grants, license fees, milestone payments, government contracts, and collaborative partners -- the largest of which is Swiss pharmaceutical giant Roche.

Inovio's (INO -5.47%) most advanced treatment, VGX-3100, has entered phase 2 trials as a therapeutic vaccine for cervical dysplasia, the leading cause of cervical cancer. VGX-3100 targets types 16 and 18 of the human papillomavirus (HPV), which has been implicated in 70% of cervical cancers. During a phase 1 proof-of-concept study of 18 women who had previously been treated for precancerous changes in the cervix, all 18 patients showed an immune response to the vaccine, while a T-cell response (which can kill off HPV-infected cells) was triggered in 14 patients.

VGX-3100 could also be a more attractive new alternative to either Gardasil or Cervarix, considering that both vaccines are no longer recommended for girls ages 12 to 16 in Japan due to major safety concerns. Top line data from the phase 2 trial of VGX-3100, the next big catalyst for Inovio, is expected in the first half of this year.

Dynavax's big bet on Heplisav
Speaking of vaccines, Dynavax's (DVAX -3.32%) Heplisav, a hepatitis B vaccine, is also worth watching this year.

The vaccine has had a rocky history -- an FDA advisory committee recommended against its approval in November 2012 due to concerns about the use of a novel adjuvant, a TLR9 agonist, in the vaccine. Adjuvants are agents that enhance a vaccine so less foreign material has to be injected. The most commonly accepted novel adjuvant in vaccines is aluminum, which the FDA generally prefers over toll-like receptor agonists such as TLR9 and TLR4, which is used by GSK's Cervarix. The FDA then rejected Heplisav in February 2013, on grounds that more safety data was required for the 18 to 70 age group. The FDA was concerned that rare autoimmune conditions could develop in vaccinated patients.

The effect on Dynavax's (DVAX -3.32%) stock price was painfully clear: 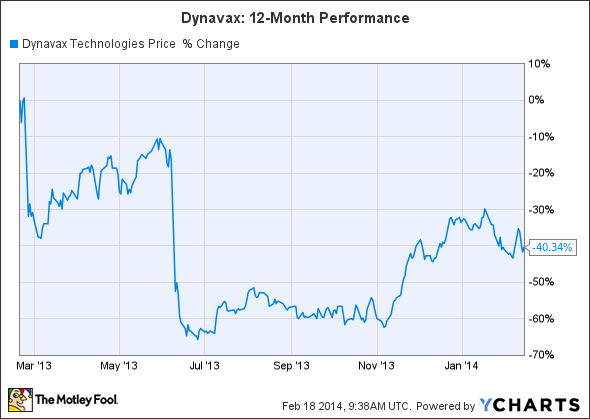 During two phase 3 trials, Heplisav was compared to GSK's Engerix-B. The first trial, HBV-10, consisted of 18- to 55-year-olds, and the second one, HBV-16, consisted of 40- to 70-year-olds. The trials showed that Heplisav was much more effective at achieving "seroprotection," which is defined as an anti-hepatitis B concentration of 10 mIU/mL or greater:

However, one troublesome spot for Dynavax (DVAX -3.32%) was the development of ANCA vasculitis, a type of autoimmune swelling, in two patients in the HBV-10 trial -- one in the Heplisav arm and the other in the Engerix-B arm. The trial determined that the Heplisav case possibly caused the swelling, while the Engerix-B case was not related to the treatment. That smidgen of doubt was enough to cause the FDA to reject Heplisav and request additional safety data from Dynavax (DVAX -3.32%).

The good news is that Dynavax (DVAX -3.32%) hasn't given up. It issued a secondary offering last October to raise $125 million to fund HBV-23, a massive phase 3 trial consisting of 8,000 patients. By comparison, HBV-10 and HBV-16 consisted of 5,845 patients combined. Although that move initially wiped out shareholders, new investors shouldn't fear any additional offerings unless HBV-23 is unsuccessful. In addition, Dynavax's (DVAX -3.32%) collaborations with GSK and AstraZeneca will provide it with stable -- if limited -- revenue throughout the year.

If approved, Heplisav could generate peak sales of $775 million and compete directly against Engerix-B and Merck's Recombivax HB. At less than $2 per share, there's simply not much downside to Dynavax stock, although it has considerable upside potential on any positive updates about Heplisav.

Ariad deserves to go higher
Last but not least, Ariad (NASDAQ: ARIA) is a stock that has fallen on hard times in the last few months. The stock was crushed last October after the FDA pulled its leukemia drug Iclusig off the market due to safety concerns regarding cardiovascular events. Although the FDA allowed the drug back to the market last December with a new warning label, the stock still hasn't fully bounced back from those devastating losses: 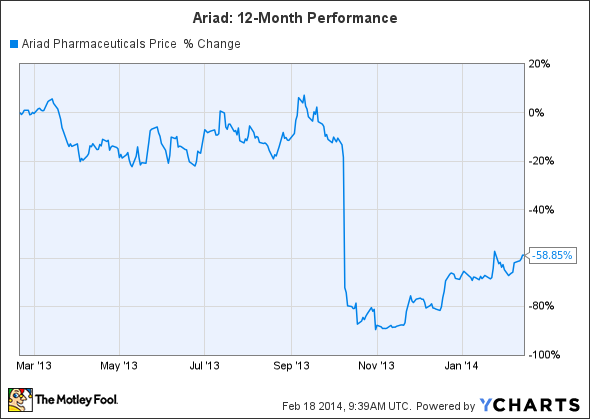 Iclusig has a wholesale price of $115,000 per patient per year, which is the model for the drug's peak sales projections of around $500 million per year -- a big boost for the company. It will be challenging for the drug to reach this lofty projection, and sales have been modest so far:

Shares of Ariad (NASDAQ: ARIA) could face more more pressure due to its dependence on Iclusig, but there could also be upside if the drug exceeds the market's expectations. Ariad (NASDAQ: ARIA) could also strike a partnership with a larger pharmaceutical partner such as Roche, it could be bought out by rumored interested parties such as Eli Lilly, GSK, and Shire, or it can sell lower doses of Iclusig as part of a combination therapy instead, boosting sales and allaying safety concerns at the same time.

The Foolish takeaway
In closing, there's no question that Inovio (INO -5.47%), Dynavax (DVAX -3.32%), and Ariad (NASDAQ: ARIA) are risky, speculative stocks. However, I believe that there is more upside than downside in all three stocks -- which makes them investments that biotech investors looking for riskier, higher-return stocks with visible catalysts down the road.

Editor's Note: A previous version of this article was accidentally published before being edited. Small edits have been made to the headline and the section on Ariad Pharmaceuticals. The Fool regrets the error.

Leo Sun has no position in any stocks mentioned, and neither does The Motley Fool. We Fools may not all hold the same opinions, but we all believe that considering a diverse range of insights makes us better investors. The Motley Fool has a disclosure policy.