Achieving double-digit returns can be easy when your portfolio is full of stocks like these.

It is not as easy to find safe and reliable high-yielding stocks as it was a few years ago, when the market was much cheaper. In fact, the average dividend yield among S&P 500 companies is now below 2%, down from around 3% in 2009.

Despite this, there are still some options for those who want a better income stream. It is entirely possible to achieve double-digit yields, and to do so fairly safely, by focusing on certain companies that prioritize income over growth. Here are three great options to help you get started in your high-yield search.

A couple of mortgage REITs
While Annaly Capital Management (NLY 0.65%) is the largest and most widely held mortgage REIT (or "mREIT"), there are some options that offer better yield with similar risk. Two of my favorites are American Capital Agency (AGNC -0.20%) and CYS Investments (NYSE: CYS), which both invest primarily in pass-through mortgage securities.

American Capital Agency currently pays a yield of about 11.8%. Until the recent rebound in the mREIT sector, the company's shares were trading for a substantial discount to book value, as can be seen in the chart below. This prompted the company to repurchase a big chunk of its outstanding shares.

In other words, toward the end of 2013, AGNC was able to repurchase its own shares for less than 80% of the value of the securities represented by the share price. That seems like a no-brainer to me. 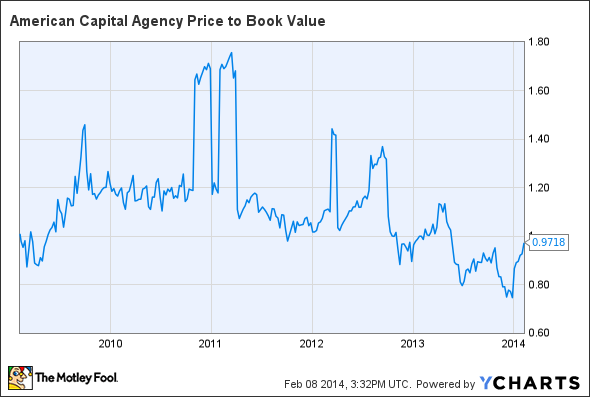 CYS Investments yields about 15.4%, substantially higher than most other mREITs. Generally, higher yield makes for a more volatile stock, but that's not really the case here. You may think the yield sounds almost too good to be true, and makes for violent pops and drops in the stock price, but that is no more the case here than for the other two mREITs mentioned.

I personally like AGNC's management team much better, and their recent actions to aggressively buy back shares reinforces that. However, don't assume a stock must be unstable and risky simply because it pays a higher yield.

Consider a high-income fund
One of my favorite high-yielding funds is the Morgan Stanley Emerging Markets Domestic Debt Fund (NYSE: EDD), which invests mostly in the government debt of emerging nations such as Brazil, Russia, Turkey, and Mexico. Although these nations are not as financially or politically stable as most developed nations, the risk of any of these defaulting right now is very small, considering the global economic conditions.

Brazil has defaulted on its debt several times in the past, but the country has become much more industrialized and economically sound since then. Mexico and Turkey both last defaulted in 1982 as a result of a global debt crisis, which caused interest rates in even the most stable countries (like the U.S.) to go through the roof. Russia has defaulted a few times in the past several decades and could be the largest risk going forward.

Regardless of each country's individual risk, the reason this fund could be a winner over the long term is its level of diversification. The fund is not too dependent on any one country, so even if Brazil, the largest holding at 16.8%, were to default on its interest payments, it would only drop the yield of the entire fund by less than 2 percentage points.

The high rates paid by these countries on their debt make it worth a look, despite any individual country's risk of eventual default.

For instance, the fund's top three debt holdings are in Brazil, Turkey, and Russia. The government debt of these countries comes with interest rates of 10%, 10.5%, and around 8%, respectively, compared with just 3.7% for the 30-year U.S. Treasury as of this writing.

Foolish final thoughts
This is by no means meant to be a complete list -- far from it, actually. Excluding small or highly volatile stocks, there are more than 50 choices that yield over 10% annually. These three just happen to look especially attractive.

One final thought: If you were to take a $100,000 portfolio that pays an average yield of 12% and reinvest all dividends for the next 20 years, you would end up with almost $1 million (assuming the portfolio is in a tax-advantaged account), and that's assuming that all of the share prices stay exactly the same.

High-yield investing is one of the best ways to get rich over the long run. While you may not hit any home runs in this type of investing, thousands of singles over the course of a career will still get you into the hall of fame!