During a challenging 2013, Hasbro's top line remained flat thanks to these brands.

During 2013, the toy industry declined slightly in several markets that included the U.S., U.K., and Australia. With a short holiday shopping season, toy-makers like Hasbro (HAS -0.88%), Mattel (MAT -2.14%), and Jakks Pacific (JAKK -0.80%) experienced slow ends to 2013. Despite this disappointing end to the year, Hasbro managed a slight increase in earnings per share for 2013 thanks to its girls division.

Girls power
During the fourth quarter of 2013, Hasbro maintained positive revenue growth of 1.9% driven by its girls category. For the year, revenue from girls increased 26% to reach $1 billion for the first time in the company's history.

The girls category was driven by the continued entertainment, licensing, and retail success of My Little Pony. During the year, the company grew My Little Pony's core products and launched Equestria Girls. According to NPD, Equestria Girls was the No. 1 fashion-themed doll in the United States during Christmas week. The brand represents $650 million in retail sales after three years of revenue growth.

The category also benefited from Furby and the introduction of Nerf Rebelle. Rebelle, a line of pink Nerf weapons, was the No. 1 brand in the sports activities and games category for 2013 according to NPD. Furby also saw year-over-year gains driven by a launch in non-English speaking markets. The toy is No. 1 in the top five European markets with 70% of its sales coming from outside the U.S. and Canada.

A combination of physical toys, digital content, and engaging storylines helped the category's continued growth during a year that was challenging for toy-makers.

The competition
Hasbro and its competitors reported slow or negative revenue growth during the last quarter of 2013. 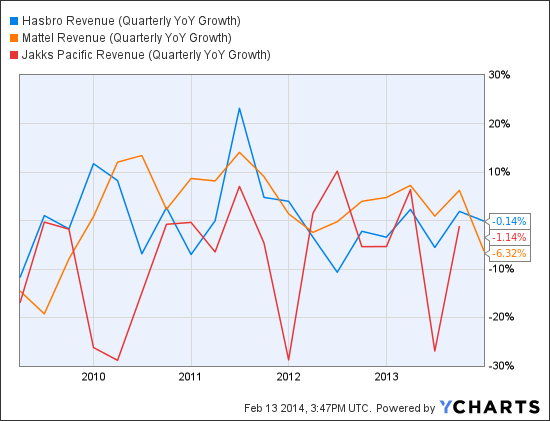 During the most recent quarter, Barbie fell short of Mattel's expectations with gross sales down 6% for the year. The doll's marketing and promotional efforts were not as effective as the company had planned with only one of the two Barbie videos meeting sales expectations. In a recent conference call CEO Bryan Stockton admitted, "The reality is we just didn't sell enough Barbie dolls." With the exception of Barbie, gross sales for Mattel's girl brands were up 25% for the year driven by Monster High.

Jakks Pacific doesn't have a specific "girls" segment. Instead, it has a "traditional toys and electronics" segment that includes action figures, vehicles, playsets, plush products, dolls, and accessories, among other products. The company's top seller in this category is its Disney Princess Doll line which competes with Hasbro's girls segment. The segment recently posted net sales of $243.9 million for the company's first three quarters of 2013. This represents a 14.5% decrease from the previous year.

Foolish thoughts
Hasbro's girls segment helped the company maintain its revenue during a challenging 2013. In a toy industry that is shifting away from traditional toys toward digital entertainment, the company has combined a storyline with its My Little Pony brand to drive its sales for the third consecutive year. Moving forward, the company will continue to grow its girls segment as it leverages film and television entertainment to promote brands across all of its segments.