Please ensure Javascript is enabled for purposes of website accessibility
Log In Help Join The Motley Fool
Free Article Join Over 1 Million Premium Members And Get More In-Depth Stock Guidance and Research
By Tim Beyers - Feb 18, 2014 at 10:27AM

Each time I've written about the possibilities for Wonder Woman in a DC movie, readers' reaction comes back the same: make her strong and intimidating, every bit Superman's equal. Thanks to the new animated feature Justice League: War, we have a sense of what that might look like.

But don't take my word for it. See for yourself:

In Justice League: War, Diana comes off as the warrior princess some fans would love to see in a live-action film. Sources: Warner Animation, YouTube.

Amazon.com ranks the film 10th on its list of the best-selling "Action & Adventure" Blu-ray titles as of this writing, and that's despite mixed reviews, especially for how the film portrays Wonder Woman. As one reviewer said, "Green Lantern is irritatingly arrogant and Wonder Woman is a moron. I wanted to take the DVD out and snap it in two after the WW ice cream scene. Unfortunately I stuck with it and I wish I had those 80 minutes back."

Another wondered why it was necessary for Wonder Woman to "act like ... a man."

And yet you can also count me among those who isn't sure what to think of Justice League: War, which is based on the relaunched "New 52" interpretation of Time Warner's (TWX) DC Comics characters. There's plenty of old-school comic book action (which I loved) but not a whole lot of character development (which I didn't). Mediocre sales from here wouldn't be surprising, which leaves investors with a troubling question.

What if, despite the comments we've seen here at Fool.com, fans don't want Gal Gadot bulking up to play a tough version of the Amazon Princess? What if they want Batman vs. Superman to concentrate almost entirely on DC's Big Two and leave the rest at the periphery?

I think that would be a huge mistake, especially when you consider that the second-biggest character in Marvel's box office history is Iron Man, a hero unknown to the public just a few years ago. (Spidey still ranks first, according to Box Office Mojo.)

What's more, I think there's ample evidence that audiences are hungry for Wonder Woman to be more than the female lead in the Justice League. Think of The Hunger Games series. Billions have gone to those films because they allow a tough heroine to shine. None -- not even Katniss -- come as tough as Diana. 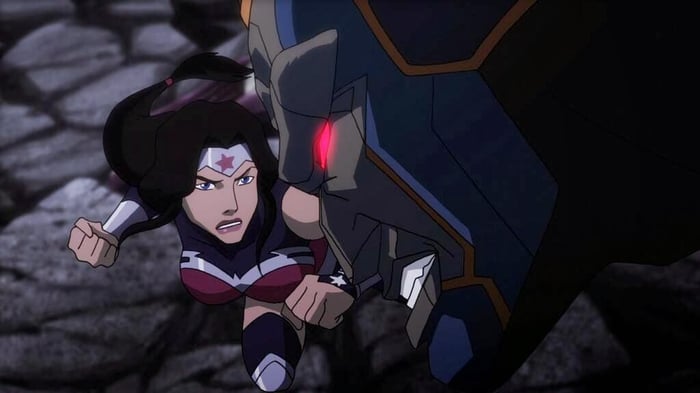 Wonder Woman about to deliver a wallop to Darkseid in Justice League: War. Credit: Warner Bros.

Now it's your turn to weigh in, fellow fans. Did you see Justice League: War? What do you hope to see from Gal Gadot as Wonder Woman in the next big DC movie? Leave a comment in the box below to let us know where you stand.

Tim Beyers is a member of the Motley Fool Rule Breakers stock-picking team and the Motley Fool Supernova Odyssey I mission. He owned shares of Apple, Google, Netflix, and Time Warner at the time of publication. Check out Tim's web home and portfolio holdings or connect with him on Google+, Tumblr, or Twitter, where he goes by @milehighfool. You can also get his insights delivered directly to your RSS reader.