When will Intel's next-generation tablet products finally hit the shelves?

It's always tough to see a company that you're invested in (and respect) fumble the ball. Such is the case with Intel (INTC -2.10%), a name that this Fool has been bullish on and has been invested in for quite some time. While the masses tend to reiterate the same tired chant, that Intel "missed" mobile (it's late, but "missed" implies that it can never catch up), Intel bulls have been in the unenviable position of knowing that Intel has the "right stuff" to succeed, but has had difficulty executing.

Where's Bay Trail?
At Intel's Developer Forum (held on Sept. 11 – 13), the company hosted an hour-long session about Android tablets that sported its upcoming Bay Trail-T and how it would enable continued momentum for Intel in the Android tablet market. Indeed, Intel had stated pretty openly that it planned to have Bay Trail-based Android tablets on the market during the holiday 2013 shopping season. 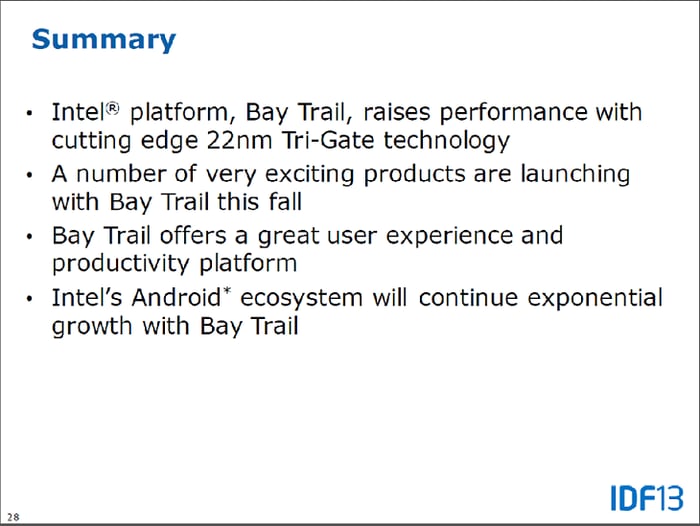 Unfortunately, no Android tablets based on Bay Trail hit the market during the holiday season. On top of that, these products still haven't hit the market. Unfortunately, this meant that Intel's competitors -- including Qualcomm (QCOM -3.17%), MediaTek, and NVIDIA (NVDA -2.72%) were able to extend their momentum in the Android tablet market. Sure, Intel won some designs with its older Clover Trail+ chip (like the Samsung Galaxy Tab 3), but these were decidedly low-end (and have been getting pushed further down the stack with each passing day).

When will Bay Trail show up in Android?
At Intel's investor meeting, the company announced its intentions to sell chips into 40 million tablets during 2014. Given that Bay Trail didn't really show up during the first quarter of 2014, and given that Intel has made it clear that Bay Trail will comprise most of the volume during 2014, Intel is going to have to show off a pretty large number of design wins at Mobile World Congress to prove that it is on track.

While it is likely that Qualcomm will retain its Amazon Kindle Fire HDX socket, as well as future cellular Samsung tablets, Intel has a decent shot of winning a next-generation Nexus tablet (given Intel's strong relationship with ASUS, which has traditionally done the Nexus 7 tablets). It is also likely to very aggressively target the numerous white-box tablet vendors in China and Taiwan.

Intel's advantage
It's no secret that Intel's Bay Trail isn't as highly integrated as products from Qualcomm, so Intel is at a disadvantage at the low end until it can get the appropriately integrated products. Intel is trying to compensate for this by providing contra-revenue and non-recurring engineering to help "equalize" the playing field. This means that, while Intel won't recognize much, if any, revenue on Bay Trail tablet products during 2014, it will be able to fight for design wins without the bill-of-materials disadvantage.

Now, while Qualcomm's Snapdragon 800/805 offers significantly higher graphics performance than the Bay Trail product, Intel has a CPU performance advantage and its CPUs are 64-bit capable. This gives Intel-based products a significant marketing point, given the "race to 64-bits" that Apple's A7 launched. Intel also probably has a lower cost of goods sold (ex-contra revenue) due to its in-house manufacturing, which is a long-term competitive advantage once the bill-of-materials problem is fixed in future chips.

Foolish bottom line
At the end of the day, it's unfortunate that Intel didn't get Bay Trail out into designs during the holiday season, but if the company can show some significant design win momentum at Mobile World Congress, then this will help drive some real enthusiasm for the company's tablet prospects.

Down 56%, This Market-Beating Stock Is a Screaming Buy Today