Please ensure Javascript is enabled for purposes of website accessibility
Log In Help Join The Motley Fool
Free Article Join Over 1 Million Premium Members And Get More In-Depth Stock Guidance and Research
By Patrick Nelson – Feb 18, 2014 at 10:10AM

Start-up Gideen will let you choose a song, and give you a third of the future music income of that chosen song for five years. Your cost is $25.

Buried in crowd-funding web site Indiegogo this month is an unusual proposal for those wishing to get in on the occasionally lucrative music business.

Start-up Gideen wants you to contribute to its website development costs via Indiegogo, and in return Gideen will let you choose a song from its pre-launch song database, and give you a third of the future music income of that chosen song for five years.

Your cost is $25 to make the Indiegogo pledge.

Twenty-five bucks for a third of a Madonna song? Madonna reportedly made $125 million in 2013.

Not quite. The database that Gideen wants to build is of undiscovered, developing-level songs, not established music by known-quantity artists. Madonna and her established ilk will be nowhere to be found. 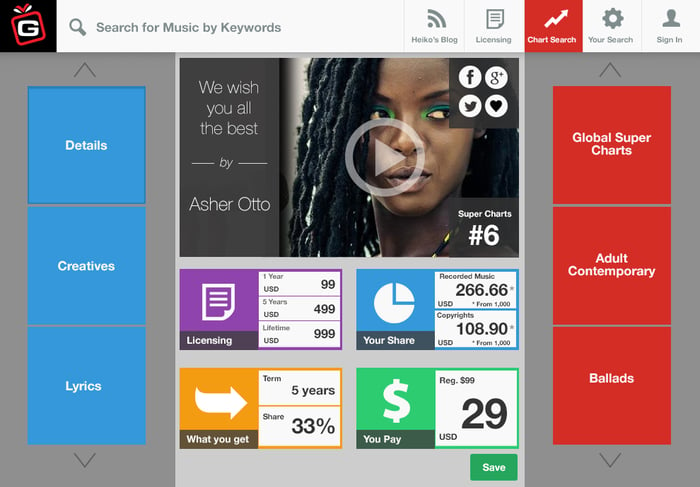 Gideen's unique business model is to create a website—using existing seed capital and future Indiegogo contributions, and then populate that website with undiscovered music, which it will then sell a piece of.

It reckons that by doing that, it will provide financially for music creators, and also investors: The investor gets a stake in the future revenue—if any—of the intellectual property.

The fly in the ointment is obviously that the music is unproven, and there may well be a very good reason that it is—there's no guarantee that it's any good. Indeed, this could be the failing in the entire business model.

Gideen calls this undiscovered music market a "secondary" market and says it's estimated to be 70 times the existing primary market … though Gideen doesn't provide anything to back up that claim. The primary market is the Madonnas and Lady Gagas of this world.

What's interesting is that you get to choose the musicians, producers, and songwriters that you want to invest in after listening to tracks. So you get to play music mogul, and if you trust your "ears" and reckon you can spot a hit—or better, longevity, the holy grail of the industry—you could conceivably recoup your investment.

Gideen isn't the first outfit to offer future-revenue investment products based on music. Musician David Bowie and banker David Pullman created "Bowie Bonds" in 1997, an asset-backed security using existing and future revenue from recorded albums. The recorded intellectual property was the collateral in that case.

That bond was introduced at a time when piracy was a serious concern—music sales overall tanked shortly afterwards.

However, with legal streaming websites prevalent now, music investment may be ready for a resurgence.

Once Gideen has built its website, non-record company and non-publisher-contracted musicians, songwriters, independent artists, and bands upload their music at no charge. Potential investors can then browse and listen to the music, and opt-in to share that music's down-the-road income.

At the same time, film and TV supervisors—the people who choose music for soundtracks—can browse and then license the music.

Investors get a share of the global advanced licensing fee from any placed music. Placed music—music placed in movies and other media is called a "sync" in the industry, and it's highly sought.

There are also music streaming and ad royalties related to the mechanical recording of the song, and intellectual property rights, called "publishing," that come into play.

Presumably the uploaded artist wouldn't say no to a record or publishing contract from a major label or publisher either, so the service has talent-scouting source possibilities too—along with kudos for Gideen that a successful sign-up could create (although I haven't seen any contractual documentation that Gideen proposes to use for the upload process).

From a major label talent scouting perspective, it's also worth noting that scouring sauna-hot, smoke-filled bars and clubs looking for the latest music talent isn't the only way to find new artists. Online music-geared social networks, pioneered by now-slowed MySpace, are equally as important as old-model talent scouts in the field.

If Gideen wants to play there too, though, it will need to introduce some kind of thus far unspecified control mechanisms to filter out material of dubious quality.

Online music retailers, like Apple's (NYSE: AAPL) iTunes, can sleep well, because Gideen, as it is currently modeled, is geared toward the professional music rights buyer—like a film music supervisor, rather than iPhone-wielding end-user.

Gideen CEO Heiko Schmidt said in blog BlaiseLucey, that Gideen is not a service, but is a "360 record label, music publishing, rights management company." And that "we become real partners and start investing."

If this partnership emphasis were to happen, it would differentiate Gideen from existing consumer-oriented music discovery websites like Google's YouTube, independent-oriented music sites like Songkick, and community network music-sharing site SoundCloud.

Gideon seed funding was provided by Joey Capital in August 2013, according to Crunchbase, and needs $10,000 to finish its website. As of this writing, the company had raised $6,132 of that goal and has 12 days left of funding. The Indiegogo campaign ends on Feb. 28.

Under normal Indiegogo Flexible Funding crowd-funding rules, the campaign will receive all funds even if the goal isn't reached.

Gideen thinks that it will launch in March. Music income buy-ins will start at $29 after launch.