The networking leader is finally starting to turn around, but is now the right time to invest?

Investors love stocks that consistently beat the Street without getting ahead of their fundamentals and risking a meltdown. The best stocks offer sustainable market-beating gains, with robust and improving financial metrics that support strong price growth. Does Juniper Networks, (JNPR -1.17%) fit the bill? Let's take a look at what its recent results tell us about its potential for future gains.

What we're looking for
The graphs you're about to see tell Juniper Networks's story, and we'll be grading the quality of that story in several ways:

What the numbers tell you
Now, let's take a look at Juniper Networks's key statistics: 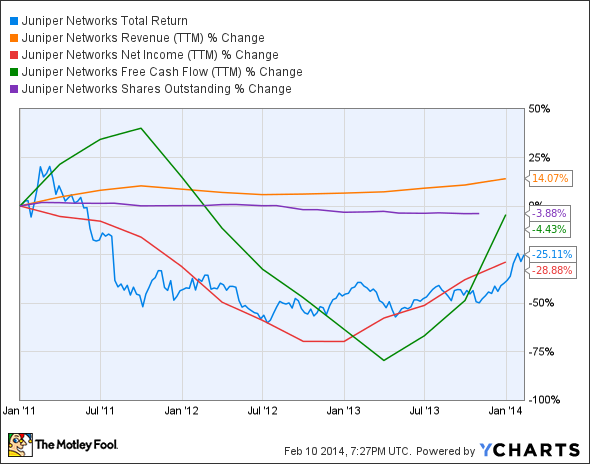 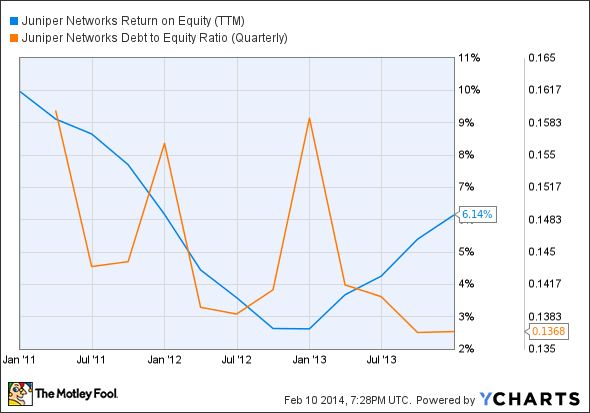 How we got here and where we're going
Things don't look good for Juniper today -- the networking equipment maker earned a rather disappointing three out of seven possible passing grades, and two of those were awarded more for technicalities than for a genuine improvement. Juniper's net income fell farther than its free cash flow, but still held up enough better than the long-term decline in its share price. How might Juniper improve its sales and its margins over the next few quarters? Let's dig a little deeper to find out.

Juniper's share-price decline might look uglier had the company not delivered market-topping revenue and EPS for the fourth quarter, due to higher spending from service providers on Software-Defined Networking (SDN) as well as lower operating costs. Juniper's stock has already rallied by more than 20% in 2014, but this might have as much to do with purchases made by two activist hedge funds as with the company's good earnings. Fool contributor Steve Symington notes that Jana Partners has announced an increase in its Juniper holdings, which followed Elliott Management's decision to acquire a 6.2% interest. Both Jana Partners and Elliott Management have encouraged Juniper to cut operating expenses, buy back shares, and initiate dividend payments to boost the stock price to between $35 and $40.

While hedge funds press Juniper to unlock shareholder value, Barclays and FBR Capital have also upgraded the company (to outperform and market perform respectively), citing an increased demand for networking components from Tier-1 service providers. Fool Alex Dumortier notes that Juniper Networks has more than $4 billion in cash and equivalents, which on a cash-to-market-cap ratio is actually higher than that of well-known cash hoarders Cisco (CSCO -1.50%), Apple, and Microsoft. However, Elliott Management recently proposed a $3.1 billion buyout of Riverbed Technology (RVBD.DL), one of Juniper's major competitors. This could strengthen competition in the connectivity and networking equipment business if Elliott treats this as a long-term play rather than as a simple leveraged-buyout raid. Since Elliott is after both companies, it seems unlikely that this will be a net negative for Juniper, as the hedge fund would have little incentive to bolster one of its holdings at the expense of another.

Fellow Fool Sean Williams also notes that AT&T, Sprint, and T-Mobile have recently beefed up capital expenditures to catch up with Verizon in terms of 4G LTE network coverage, which could help both Juniper and Cisco land several big orders for networking equipment. Juniper recently rolled out an open-source SDN controller called OpenContrail, as well as SDN-ready products such as T4000 and PTX, to accelerate its revenue growth in the hybrid router and switch market. Cisco, which has a lot to lose from SDN adoption, is fighting back with its Insieme line of products, which act as a sort of SDN substitute. It hasn't helped that Juniper and Cisco's major customer Google now buys generic switches from manufacturers in China and Taiwan, presenting a major threat to their core business.

Putting the pieces together
Today, Juniper Networks has some of the qualities that make up a great stock, but no stock is truly perfect. Digging deeper can help you uncover the answers you need to make a great buy -- or to stay away from a stock that's going nowhere.

Alex Planes has no position in any stocks mentioned. The Motley Fool recommends Apple, Cisco Systems, and Google. It owns shares of Apple, Google, Microsoft, and Riverbed Technology. We Fools may not all hold the same opinions, but we all believe that considering a diverse range of insights makes us better investors. The Motley Fool has a disclosure policy.