For a second straight year, NVIDIA Corporation plans to return at least $1 billion to shareholders, primarily through buybacks.

As recently as mid-2012, NVIDIA Corporation (NVDA 8.24%) was faced with a falling stock price and a rising cash stockpile. At one point, NVIDIA's cash accounted for more than 40% of its total market cap! Meanwhile, the company's generous stock compensation meant that shareholders were enduring slow but steady dilution as the share count rose from less than 500 million in 2004 to more than 600 million by 2012. 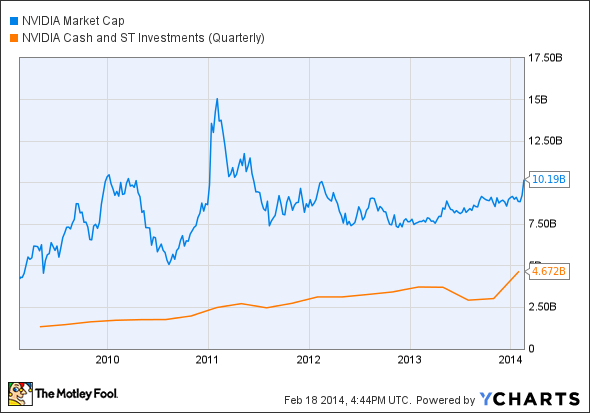 In other words, the time was right for a big stock buyback. This would return excess cash to investors and reverse years of shareholder dilution.

Finally, in November of 2012, the company gave in and announced an extension of its dormant share repurchase program and the initiation of a dividend. Since then, NVIDIA has become increasingly aggressive in returning cash to shareholders. Just a few weeks into its new fiscal year, the company has continued down that path by setting up another big share buyback.

The capital return program heats up
After announcing an extension of its share repurchase authorization in late 2012, NVIDIA gave investors more clarity on its intentions last April. At that time, the company announced plans to return $1 billion to shareholders in that fiscal year through dividends and share repurchases.

The bulk of this capital return program was completed through a $750 million accelerated share repurchase facilitated by Goldman Sachs (GS 1.30%). In total, NVIDIA returned $1.07 billion to shareholders last year, consisting of $181 million in dividends and $887 million used to repurchase 62 million shares.

Staying aggressive
Luckily for investors, NVIDIA did not decide to rest on its laurels after returning more than $1 billion last year. In November, the company announced that it would return an additional $1 billion to shareholders during the 2015 fiscal year, which began several weeks ago. This will include an increased dividend as well as continued share repurchases.

However, by that point, NVIDIA was starting to run short of domestic cash. Like many other tech companies -- most notably, Apple (AAPL 4.86%) -- NVIDIA keeps a large portion of its cash outside of the U.S. in order to avoid steep repatriation taxes.

NVIDIA quickly solved this problem in November by issuing $1.5 billion of convertible debt. This provided ample domestic cash for dividends and share repurchases. This week, NVIDIA will initiate a second accelerated share repurchase with Goldman Sachs, paying $500 million for more than 20 million shares. Barring a steep rise in NVIDIA's share price, Goldman Sachs will deliver additional shares to the company when the ASR settles in July.

Dilution reversed
NVIDIA's aggressive share repurchases have enabled it to quickly reverse much of the dilution that occurred between 2004 and 2012. The number of shares outstanding has dropped about 10% from the peak of about 625 million, and will continue to fall due to the company's 2015 share repurchase program. 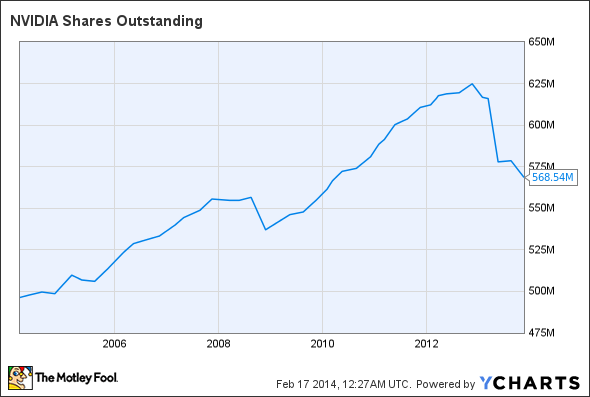 Based on the strong results NVIDIA reported last week, the company's buybacks appear to have been well-timed so far. If NVIDIA can maintain its momentum, shareholders will benefit from the combination of growing net income and a shrinking share count, which could drive a big increase in EPS. That could drive additional share price appreciation.