Rackspace investors got spooked by the retirement of Lanham Napier, but are there deeper problems to come?

Shareholders in cloud provider Rackspace (RAX) endured a rough time after the stock fell 15% on the week of its results. While the numbers were slightly better than analyst estimates, investors reacted badly to the announcement that CEO Lanham Napier was leaving the company. Has the market overreacted and made the stock a good value?

Rackspace racks up uncertainty
Napier's announcement certainly shocked the market, and negative surprises are the last thing that a company clouded in uncertainty like Rackspace needs right now. Essentially, there are two fears hanging over the stock. The first is well-known, but the second might prove even more problematic in the long term.

Let's look at each of these points.

Rackspace's competitive pressures
The first concern relates to the ongoing price war in infrastructure as a service, or IaaS. Microsoft and Amazon have been locked in a discounting war, with the former trying to muscle in on the cloud-computing services market. Indeed, Microsoft has promised to match any price of comparable solutions from AWS, and both companies have significantly cut prices recently.

According to a Microsoft blog:

Meanwhile, Google's Compute Engine has now been made generally available, an development marked by Google immediately dropping prices. It gets worse. IBM (IBM -0.66%) is also expanding its cloud IaaS, most notably by its July 2013 acquisition of SoftLayer, a move that analysts at Gartner argue gives IBM capability to compete with Rackspace. Factor in Oracle's investment in its IaaS offering, with which it intends to be competitive with AWS, Azure, and Rackspace, and it's starting to get worrying for Rackspace.

IBM, Google, Microsoft, Amazon, and Oracle -- the names read like a roll call of blue-chip tech companies, all of which are willing to subsidize selling IaaS in order to be able to sell cloud applications to the same customers. Rackspace's argument is that it offers a differentiated service, thanks to its fanatical support. When questioned on the subject of pricing on the conference call, Rackspace President Taylor Rhodes replied:

...every industry has large-scale players who are generalists, and every industry has specialists who seek customers where we can solve more complex and more valuable problems, and therefore they're willing to pay us more. So you won't see any deviation from that thesis in our execution in 2014.

In other words, Rackspace believes that it can charge a premium for its specialist support, but at what cost does this come to the company?

Can Rackspace leverage revenue into cash flow?
The issue can be summarized nicely in the following chart. Rackspace's business model involves making substantive investments in customer gear, which make up the larger part of its capital-expenditure requirements. Customers love this, because they are de facto outsourcing these IT expenditures to Rackspace. The following are trailing figures. 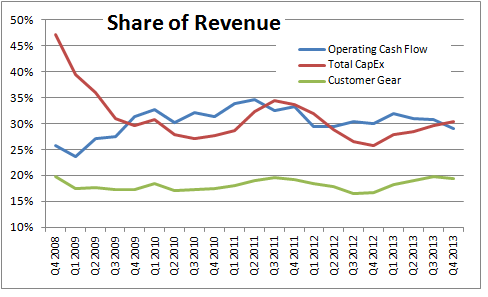 The difference between operating cash flow and capital-expenditure requirements are one measure of free cash flow, and it's clear that Rackspace has struggled to increase this figure even while its revenue has grown at a compound annual rate of 25% over the last three years.

In its defense, Rackspace's management has outlined that 2013 was a year where it built excess capacity, and on the conference call, it argued that 2014 would see capex as a share of revenue come down "toward that 25% number."

It's time to look at a rough model of what to expect in the future. Going back to the chart, assuming that operating cash flow is around 32.5% of revenue, and that capital expenditures will vary between 25%-30%, Rackspace will convert around 2.5%-7.5% of its revenue into free cash flow.  For argument's sakes, assume that the enterprise value, or EV, stays constant at the current value of $4.53 billion, and top-line growth continues at 16%.

Recall that the 7.5% and 2.5% represent optimistic and pessimistic assumptions, so the true figures will likely fall somewhere in between. It's clear that it's going to be a while before Rackspace starts generating a significant free-cash-flow yield.

The bottom line
Before the company can be seen as a good value, investing Fools have to believe that it can hold pricing against an onslaught of competition from some of the world's largest tech companies. Moreover, there is the usual headline risk from the economy. Rackspace shares may appreciate in the coming months, as investors get comfortable with the idea that Napier's retirement is not an issue in itself, but the long-term case for Rackspace is getting harder to make.