Please ensure Javascript is enabled for purposes of website accessibility
Log In Help Join The Motley Fool
Free Article Join Over 1 Million Premium Members And Get More In-Depth Stock Guidance and Research
By Brandy Betz - Feb 18, 2014 at 11:35AM

The natural food store had weaker first-quarter comps growth. Do the reasons behind the slowdown merit worry?

Whole Foods Market (WFM) reported first-quarter results last week and its shares dropped by nearly 8%. The grocery chain reported lower revenue and profits than expected and issued a weaker forecast for 2014. Whole Foods continues to add stores but it faces increasing competition from The Fresh Market (TFM) and Sprouts Farmer's Market (SFM -0.69%). However, the store remains one of the most famous health food stores and it has a newly signed deal with Square to begin offering mobile payments at its registers. Also, the first quarter wasn't as bad as it seemed.

A weak quarter for Whole Foods still looks pretty healthy. Revenue grew nearly 10% to $4.2 billion. Comparable-store sales were up over 5%, which was down from the prior quarter's growth of nearly 6%. That doesn't paint as pessimistic of a picture as it may seem. Why shouldn't investors worry about the comps slip?

What caused comps growth to slow?
Inclement weather hit retailers in general this quarter. Whole Foods execs also acknowledged during the conference call that cannibalization has become an issue in some larger markets such as Boston. Whole Foods ended the quarter with 307 stores, another 100 in development, and the goal of having more than 500 stores in total by 2017. Long-term, the company sees the potential for over 1,000 stores. So cannibalization will likely remain an issue in certain markets.

The breakdown of comps by store age shows that the comps deceleration comes from an aging fleet of stores. 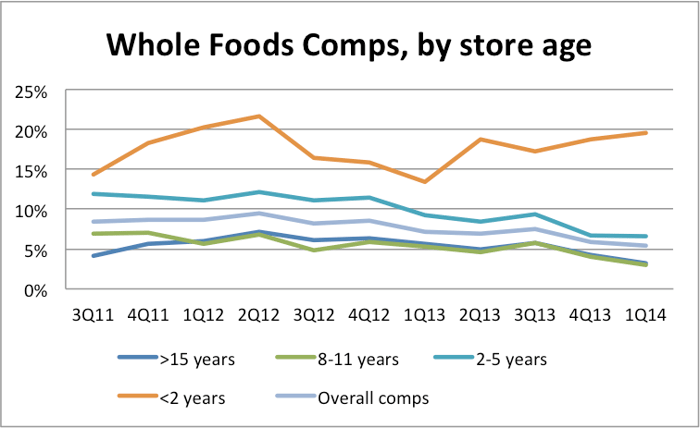 Nearly a quarter of Whole Foods stores fall into that 15 years-or-older category and more than half were opened at least eight years ago. The two oldest categories each had comps of 3.2% for the quarter, which was considerably lower than the nearly 20% growth for the stores which were younger than two years. However, that's not the full story. The older stores have far higher returns on invested capital, or ROIC. Here's how ROIC breaks down by store age:

*ROIC: "Defined as annualized store-level income after taxes divided by average invested capital; does not reflect any as-if effect of capitalizing operating leases"

So older stores decelerate on comps but they have far higher ROIC since the company doesn't need to invest as much money into their operations. The overall comps rate remains reasonable when matched against the competition.

Sprouts' third-quarter report included comps growth of 10.2% with revenue growth of 24% to $634 million. However Sprouts, which went public last summer, only has 160 stores and so the company finds itself near the start of its growth story where double-digit comps are expected if everything's going well.

Foolish final thoughts
Whole Foods stores face comps deceleration with age. The degree to which this deceleration impacts Whole Foods' overall comps will increase as more stores join the "old age" categories -- assuming there's not a balancing number of new stores added to the mix. However, the ROIC numbers show that the stores aren't short on potential. The growth story of Whole Foods might change, but that doesn't mean the company's finished growing.