BreitBurn Energy Partners L.P. (BBEPQ) pays its investors a lot of money each month. As it currently stands, the company's units yield 9.4% on an annual basis. Investors can thank the company's oil focused approach for that high yield. Here's why.

Going in different directions
The reason investors love BreitBurn Energy Partners' massive distribution is the fact that it's fueled by oil. While natural gas prices offer potential upside to companies like Vanguard Natural Resources, LLC (NASDAQ: VNR) and Atlas Resource Partners, L.P. (NYSE: ARP), oil is where the money is these days. As the following chart shows, BreitBurn Energy Partners is right in that oily sweet spot. 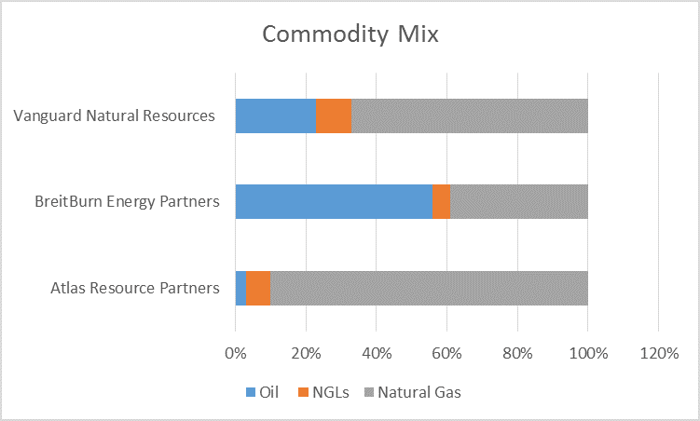 It's the same story at Atlas Resource Partners. Just this month the company spent $107 million to buy natural gas assets in West Virginia and Virginia. Previous to that, the company made a really transformational natural gas deal that saw it acquire several gas assets around the country for $733 million. The focus for both companies has been on acquiring cheap natural gas assets. While those big bets could pay off in the long-run, oil is what still rules the energy markets of today.

BreitBurn Energy Partners gets oily
BreitBurn Energy Partners has been on a real oil focused buying binge of late. Last December the company spent $282 million to buy oil focused properties in the Permian Basin. Before that the company made a really big oil deal as it picked up about $900 million worth of oil properties in the Oklahoma Panhandle. These deals have really helped to shift the company's commodity mix to oil.

However, BreitBurn Energy Partners hasn't simply been buying its way into oil fueled growth. The company's oil focused drilling program has slowly been adding to its oil production. That capital program last year saw BreitBurn Energy Partners invest $270 million to drill or redrill about 145 wells. That was money well spent as the oil focused program is expected to fuel a 100% jump in its liquids production year-over-year.

Investor takeaway
While the natural gas bets by Vanguard Natural Resources and Atlas Resource Partners could very well pay off in the long-run, it's hard to argue with BreitBurn Energy Partners' oil focused strategy. The company is making needle moving oil acquisitions and complimenting those with its oil focused drilling program. Because of this the company currently has one of the strongest distribution coverage ratios in the sector, which strongly suggests that its fast growing distribution isn't slowing down anytime soon.

Matt DiLallo has no position in any stocks mentioned. The Motley Fool recommends BreitBurn Energy Partners L.P.. We Fools may not all hold the same opinions, but we all believe that considering a diverse range of insights makes us better investors. The Motley Fool has a disclosure policy.

Breitburn Energy Partners LP Digs In for a Tough Year

This Dividend Only Has One Way to Go