After reporting lackluster earnings for its fourth quarter, shareholders are probably wondering if GNC is all it's cracked up to be. Right now, though, the company looks strong but not quite as strong as Vitamin Shoppe.

Feb. 14, 2014 was a terrible day to own shares of GNC Holdings (GNC). After reporting earnings for the fourth quarter of its 2013 fiscal year, the $4.3 billion nutritional-supplement retailer plummeted by nearly 15%. However, in light of the earnings disappointment and the share price drop, is it possible that Mr. Market overreacted? Is GNC really such a terrible investment opportunity or is now an opportune time to buy GNC on the cheap?

GNC just couldn't please Mr. Market
For the quarter, GNC reported revenue of $613.7 million. This represented an 8.6% gain from the $565 million the company reported for the fourth quarter of 2012, but it fell short of the $633 million that analysts anticipated. In the release, management attributed the rise in revenue, in part, to the addition of 154 locations since the end of GNC's 2012 fiscal year. However, the company also benefited from a 5% rise in comparable-store sales.

How does GNC stack up to its peers? 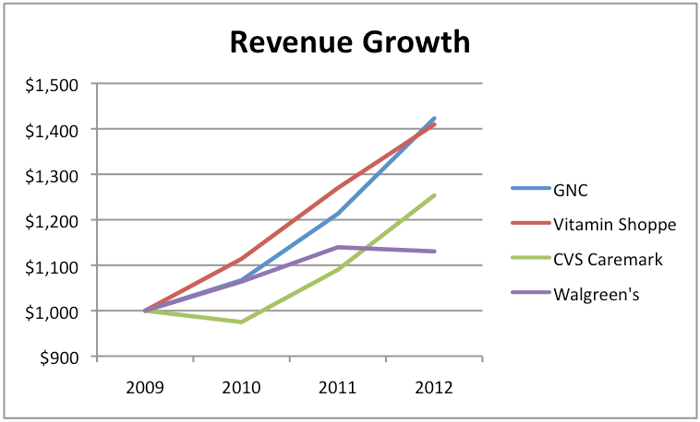 As we can see in the graph above, which measures the revenue growth of GNC and each of its competitors using a base of $1,000, the company has been a growth power play over these past four years. Between 2009 and 2012, the company grew its revenue by 42% from $1.7 billion to $2.4 billion.

GNC wasn't the only company in this area that grew rapidly. Smaller rival Vitamin Shoppe (VSI) reported that its revenue grew 41% over the same time-frame, from $674.5 million to $950.9 million. Both companies saw rises in revenue because their store counts increased and their comparable-store sales rose.

Although they do not offer perfect comparisons, both CVS Caremark (CVS 0.92%) and Walgreen (WBA 0.41%) should be pitted against GNC as well since they both operate businesses that sell similar products. Between 2009 and 2012, CVS grew sales by an impressive 25% from $98.2 billion to $123.1 billion, while Walgreen's sales rose by only 13% from $63.3 million to $71.6 million. Both companies benefited from favorable sales trends but they haven't been able to keep up with their smaller rivals as they have more limited growth prospects because of their size. 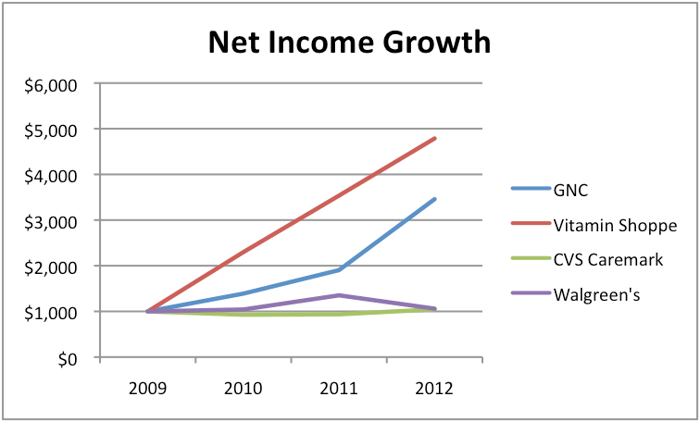 In terms of revenue growth, GNC has proven victorious over its peers. However, when it comes to profitability GNC plays second fiddle to its smaller rival Vitamin Shoppe. Over the past four years, Vitamin Shoppe has seen its net income rise by a whopping 379% from $12.7 million to $60.8 million. To put this into context, we need only look at GNC. Despite being second place in net income growth, GNC's four-year growth rate came in at 246% as its net income rose from $69.5 million to $240.2 million. While this is by no means bad, it's much lower than the growth rate of GNC's peer.

Foolish takeaway
Based on the data provided, it looks as though GNC's shareholders got a little ahead of themselves. Despite seeing an 8% rise in revenue for the year, shareholders clearly expected more. In the short term, this could create some pain for investors but, given the company's long-term performance, it could provide the Foolish investor with a great opportunity to buy. However, it should not be forgotten that Vitamin Shoppe has a stronger track record than its peer, and after falling by 6% in response to GNC's earnings release it might be a better prospect.