Earnings are around the corner, and short-term improvements are possible, but there’s one key reason why J.C. Penney is going to have a tough time delivering sustainable top-line growth over the long haul.

Penney potential
It should be relatively easy for J.C. Penney to show year-over-year improvements versus when former CEO Ron Johnson was running the show. For the record, his tenure led to a fiscal-year sales decline of 25% to go along with a net loss of $985 million.

Johnson's boutique and everyday-low-price strategy alienated the retailer's biggest consumer -- the baby boomer. Now that Mike Ullman has returned, he has refocused on promotions and popular private brands. Some salespeople are also working on commissions again, which could have a minimal positive impact on sales.

The real key is the promotions, which are what formerly loyal baby boomer customers desire. This is a positive for now, but if you look at the long-term picture, while Johnson's execution was poor, he had the right concept. He noticed a trend that the masses aren't paying attention to, and it's a trend that's likely to have a massive long-term impact on J.C. Penney.

A mortal breed
Going back to targeting baby boomers might lead to short- to medium-term improvements for J.C. Penney, but baby boomers are retiring in droves. Therefore, the majority of them are going to be on fixed incomes. When people retire, they tend to spend less than in the past simply because they don't make as much. If they're going to spend big money, it's usually going to be on travel.

Another important factor is that baby boomers, like all human beings, won't live forever. Therefore, if we're looking at the long-term picture, where are J.C. Penney customers going to come from once baby boomers are no longer around?

J.C. Penney hasn't established a strong presence with millennials, or Generation Xers for that matter. However, millennials are the key since they're the largest generation since the baby boomers. They're also the most technologically savvy. And Macy's is well ahead of J.C. Penney and Sears when it comes to technology by catering the most to the omnichannel consumer. In other words, Macy's makes it easy for consumers to combine all three shopping methods: in-store, online, and mobile.

Numbers and charts tell a story
In November and December, J.C. Penney saw comps improve 3.1%. That's impressive but also expected considering how poorly J.C. Penney performed for the same time frame one year earlier. Comparatively, Sears saw comps slide 9% for the nine weeks ended Jan. 4. Its Kmart brand didn't perform much better, with comps declining 6%. Macy's delivered an impressive performance for November and December without having the luxury of comparing to a disastrous era, with comps climbing 3.6%.

J.C Penney recently cut 2,000 jobs and closed 33 stores. The stores that closed (or are closing by May) were mostly located in small regional markets. Therefore, these closures should lead to slight bottom-line improvements since they don't drive much traffic anyway. Combining job cuts and store closures, J.C. Penney expects to save $65 million per year. Any improvement is a positive, but this isn't likely to have a massive impact over the long haul.

If you look at the long-term picture, as in the last five years, only one of the aforementioned companies has seen its top line grow faster than its selling, general, and administrative expenses: 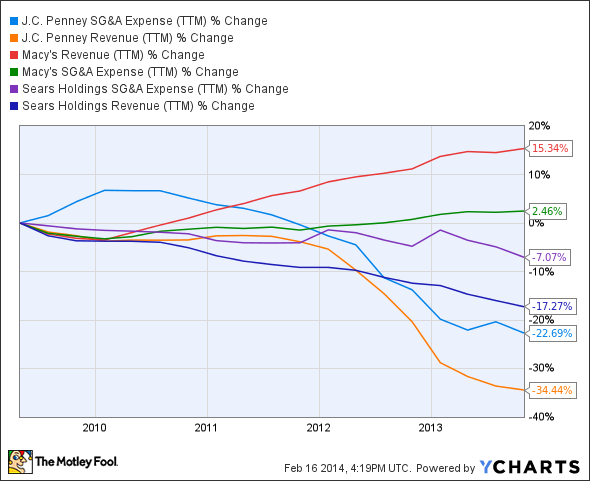 That would be Macy's. If you want to take a gander at the same chart for a one-year time frame, then a similar story plays out: 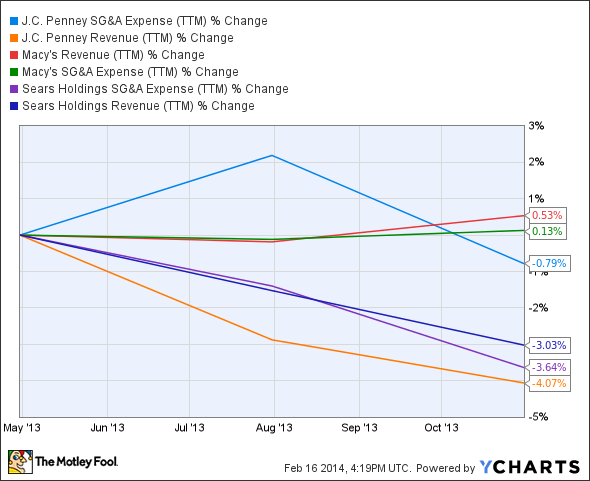 Macy's is clearly outperforming its peers in terms of efficiency. It's also the only profitable retailer of the three. On top of that, it's fiscally sound. For instance, Macy's generated operating cash flow of $2.2 billion over the past year. Over the same time frame, J.C. Penney and Sears generated negative operating cash flow of $1.5 billion and $694 million, respectively. Furthermore, Macy's sports a debt-to-equity ratio of 1.3. Not great, but stronger than J.C. Penney and Sears at 2.1 and 2.

The Foolish takeaway
There's no telling what will happen to these three companies this earnings season. However, it's clear that J.C. Penney's targeting of baby boomers is likely to lead to short- to near-term rewards and severe long-term headwinds. The point here is that while it's possible for J.C. Penney to surprise to the upside, its long-term prospects still aren't good. And while it's possible that Macy's doesn't impress shareholders on Feb. 25, it has much higher odds of long-term success. Please do your own research prior to making any investment decisions.