It isn't clear whether Prana Biotechnology's PBT2 is effective in Huntington Disease. We'll know whether it will press on -- like Merck and Eli Lilly have done -- in Alzheimer's disease next month.

Prana Biotechnology's (NASDAQ: PRAN) Huntington disease drug, PBT2, is safe, but whether it helps patients enough to get approved remains to be seen.

The press release headline "Prana Announces Successful Phase 2 Results in Huntington Disease Trial" sounds good, but the primary endpoint of the phase 2 trial was safety, not efficacy, so it wasn't that high of a hurdle to jump over.

"There were no substantial differences in adverse events across the two PBT2 dose groups and the placebo group," the press release said. Yee-haw.

Moving on
Because let's face it, the Food and Drug Administration isn't going to approve a drug just because it's safe. It has to do something to help patients.

Prana ran a bunch of efficacy tests on the patients, measuring cognition, motor skills, function, and behavior. Only one test of cognition was statistically significant.

I've heard many people argue that's data mining. And on some level, it is; the more measurements you make, the more likely it is that something will come back as statistically significant, even if it's just an artifact.

But I think investors should give Prana Biotechnology the benefit of the doubt, here. The hypothesis is that PBT2's mechanism of action -- reducing metal mediated toxicity -- can improve cognitive function. It appears the other tests were performed to be thorough rather than because anyone expected an actual improvement. For motor function, for instance, PBT2 doesn't act on dopamine levels, so it's unlikely it would improve motor function.

The trial results would have had a lot more weight if Prana had listed cognitive function as a co-primary endpoint with safety and left the other tests as secondary endpoints. Of course, if they had, and the cognitive test wasn't statistically significant, the company would have had a hard time justifying moving PBT2 into a phase 3 trial.

Here's how the patients in the different dosing groups did after taking the drug for 26 weeks. 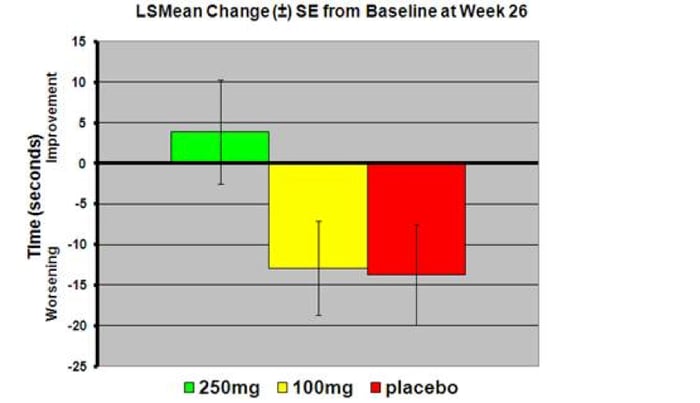 I'd feel a lot more confident if the 100 mg dose was closer to half way between the 250 mg dose and the placebo group. While a dose-dependent efficacy would be a good sign, it isn't necessarily a sign that the improvement at 250 mg is an artifact; some drugs have a threshold that needs to be reached before they start working.

More importantly, while the difference was statistically significant, it isn't clear to me if the FDA will see the difference as clinically meaningful. The Trail Making Test Part B is designed to test executive cogitation, the ability to problem solve and be flexible in situations that demand it. The FDA will need to be convinced that the difference translates into a meaningful improvement in Huntington disease patients' lives.

Prana plans to meet with the agency to work out details for a larger phase 3 trial.

A sign of things to come?
Prana is also testing PBT2 in a phase 2 trial in Alzheimer's disease, which is scheduled to read out in March. The hypothesis is that metals, which PBT2 binds up, may be leading to cognitive decline in both diseases. Like the Huntington disease trial, it's a phase 2 proof-of-concept trial, making it hard to handicap.

The good news is, the trial's primary endpoint is a measurement of efficacy rather than just safety, like the Huntington disease trial. The bad news is, the primary endpoint is the level of amyloid plaques in patients' brains, which is a rather indirect measure of efficacy, and it's still hotly debated whether amyloid plaques are a cause or an effect of Alzheimer's disease. Investors should pay more attention to the cognition tests, which will be run as a secondary endpoint.

Good buy?
For the most part, investing in neurodegenerative diseases is a crapshoot.

Not that it stops companies from trying. Merck (MRK -1.87%) recently moved MK-8931 into a phase 2/3 study last year. Eli Lilly (LLY -2.90%) is testing solanezumab in a large phase 3 trial despite previous failures of the drug.

I can't really blame companies for proceeding. The potential market is so large, it's not hard to justify paying for the clinical trials even if the chance at success is less than 50%.

The obvious difference between investing in Merck or Eli Lilly and investing in Prana is that the failure of trials by the large pharmas won't kill the company. If you're going to invest in Prana, make sure it's money you can afford to lose. At a market cap under $400 million, there's a lot of upside if PBT2 works in Huntington or Alzheimer's disease, but it doesn't come without a lot of risk.