Hasbro's boys' category had a challenging 2013, but the company hopes to bounce back this year with the help several blockbuster films coming out this summer.

During 2013, toy maker Hasbro (HAS -0.93%) saw a $339 million decrease in its boys category that was a result of a strong 2012 for entertainment. The company makes toys to accompany major film and television releases and experienced a drop in Marvel and Beyblade sales with less excitement surrounding those brands during the year. With competitors Mattel (MAT -0.87%) and JAKKS Pacific (JAKK -1.02%) also leveraging entertainment, Hasbro has made plans to ramp up entertainment in 2014.

A slower movie year
Hasbro ended the year with lower revenue from entertainment aimed at boys.

The company partners with Marvel to make toys for its characters, television shows, and feature films. Marvel's The Avengers was released in 2012 and was the culmination of three other films that were released two years prior. It was also the year the Spider-Man franchise was rebooted, which led to a record year for the partnership. While the most recent year had Marvel films, it was not as profitable as the previous year. 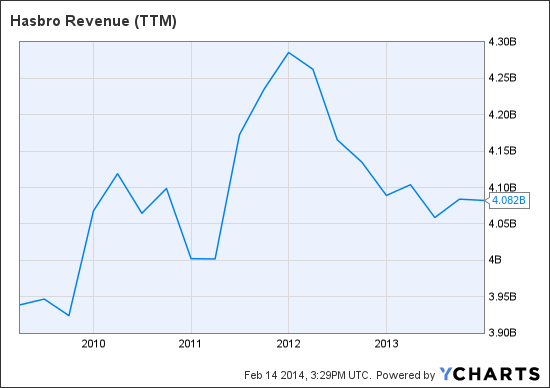 Hasbro's revenue peaked at year-end 2011, six months after the release of Transformers: Dark Side of the Moon. Transformers grew in 2013 as a result of a global television strategy. It is one of Hasbro's most global brands with more than 50% of revenue coming from sales outside of the U.S.

Moving forward, Hasbro has a multi-year entertainment slate that it hopes will improve sales of its boys' brands. During 2014, Sony Pictures will release The Amazing Spider Man 2. Marvel Studios will release Captain America: The Winter Soldier and the new franchise Guardians of the Galaxy. There is also a new Transformers film being released. Transformers toy sales spiked to a combined $1.6 billion during the years the movies were released thanks to the global success of the films that earned a total of $3 billion at the box office worldwide.

Mattel partners with Walt Disney to make toys, dolls, and accessories for princesses and other characters. In 2013 the company successfully launched toys based on Frozen and Planes. Mattel also began a new partnership with Marvel that could potentially take market share away from Hasbro.

JAKKS Pacific also produces top-selling Disney princess and fairy dolls that include Sofia the First dress-up and role-playing items. These items dominate the company's sales, and JAKKS has begun to expand its Disney business internationally into the Chinese and Latin American markets.

The major toy makers all have overlapping agreements with entertainment companies like Disney and Marvel, and it's clear that while having a popular brand will help boost sales it might not be a unique competitive advantage.

The advantage
While Hasbro shares Marvel with its main competitors, the Transformers brand is a competitive advantage for the company. The movies are extremely successful globally, which has helped Hasbro's international sales. The company saw international revenue increase 5% in 2013 with emerging markets rising 25% for the year. Transformers has done well in the international and domestic markets during non-movie years. As the company moves into a year of entertainment, I expect the boys' segment to grow beyond the losses of 2013.