Revenue at Wells Fargo took a turn for the worse in 2013, which was different from what Bank of America, Citigroup, and JPMorgan Chase saw, and investors need to know if they should be concerned.

With the full-year results in for all the biggest banks, Warren Buffett's favorite bank, Wells Fargo (WFC -4.96%), had one critical number move in the wrong direction -- and investors need to know if they should be concerned.

The vitally important top line
Banks across the United States had great years in 2013. Bank of America had a net income of $11.4 billion, which nearly matched what it earned over the previous five years from 2008 to 2012 combined. Bottom-line net income at Citigroup was up 84% on the year, and adjusted net income -- which excludes accounting adjustments and other one-time charges -- impressively grew by 15%. Even JPMorgan Chase, with the massive settlements that characterized 2013, only saw its income dip by 16%.

Yet perhaps the most impressive results was seen at Wells Fargo, which reported its highest annual profit ever, and it broke its quarterly net income record for the 11th quarter in a row. In total, net income at Wells Fargo rose from $18.9 billion to $21.9 billion, a gain of 16%. And it once again bested its four peers in every major pertinent profit metric, showing why it commands a premium valuation:

While Wells Fargo had a number of compelling things going for it, a quick glance at the top-line results reveals something rather startling: 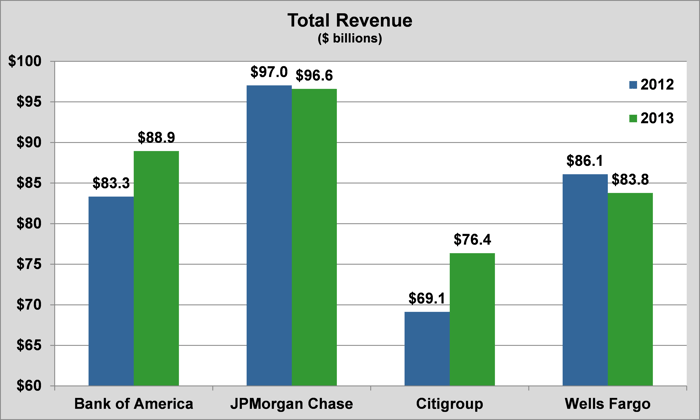 As you can see, Bank of America and Citigroup delivered impressive revenue growth year over year, with 7% and 11% gains, respectively, and JPMorgan Chase saw its drop slightly. However the revenue at Wells Fargo dipped by 3%, placing it well behind the trend seen by its biggest peers.

Continued growth in income is something to be admired, yet a unique dip in revenue often indicates potential troubles may be ahead, and ultimately, the record profits will be squeezed.

However, in the case of Wells Fargo, this dip in revenue shouldn't cause investors any concern.

Digging further
A quick glance at Wells Fargo's income statement reveals its mortgage banking revenue was cut by almost half when comparing the fourth quarter -- from $3.1 billion in 2012 to $1.6 billion -- and 25% from $11.7 billion to $8.8 billion when looking at the entire year. Yet interestingly, the dip was even larger at JPMorgan Chase, which generated the second-highest mortgage revenue of the big four, where mortgage banking revenue fell by 40% on the year, from $8.7 billion to $5.2 billion.

Wells Fargo is the biggest mortgage originator in the United States, and the boom in refinancing over previous years helped it considerably. However, with interest rates on the rise and refinancing waning, there was no denying the company would see its revenue begin to decline as a result.

However, this shouldn't concern investors, because more than anything, with mortgage rates at historic lows, the massive gains seen in mortgage income were largely a one-time event that Wells Fargo was able to capitalize on, but ultimately understood as a temporary phenomenon that would one day end. This helps explain why even despite falling revenue, its return on average assets rose from 1.41% to 1.51%.

Declining revenue should always raise a red flag for investors, but in the case of Wells Fargo, it was more the result of an abnormal boom seen in 2012 than poor performance in 2013, which means all fears should be dissuaded.