The answer to the question in the headline is simple: Worse! However, at least one investment opportunity exists in this sector.

In the 1990s, it seemed like almost everyone had money. Most Americans were upbeat about their economic prospects, and they showed off their money in various ways. This might have been through a new home, a stylish car, or trendy attire. The latter trend trickled down to teenagers and even younger kids. If you lived in this era, then you know that it was cool to be "in with the crowd."

Today's younger consumers have a much different definition of cool. In fact, wearing attire that sports a logo to show that you're "in with the crowd" is out. Teenagers now desire uniqueness, showing who they are via art, music, attire, and more. They're also more into urban attire than what can sometimes be referred to as "preppy."

Although not all of the attire from Abercrombie & Fitch (ANF -2.40%), Aeropostale (AROPQ), and American Eagle (AEO -2.71%) fits into the "preppy" category, these brands simply aren't seen as on-trend anymore. This doesn't mean all three companies are being left for dead. Abercrombie & Fitch and American Eagle have enough fiscal strength to pull off comebacks if they can rebrand themselves correctly. For Aeropostale, the light at the end of the tunnel is dimming by the day.

In denial
Let's begin with American Eagle. It claims to offer "high-quality, on-trend clothing, accessories, and care products." The high-quality part is justifiable, but on-trend is not.

For the nine weeks ended January 4, the company's revenue declined 2% from the year-ago period. Comps slid 7%. Looking ahead, American Eagle now expects diluted earnings-per-share of $0.26 versus a prior expectation of $0.26-$0.30.

A retailer that suffers a 2% decline in revenue and a 7% hit to comps is not on-trend. However, it could be worse.

Aeropostale's third-quarter sales plummeted 15%, with comps also declining 15%. The struggling retailer reported a net loss of $25.6 million. Aeropostale stated that the retail environment was more promotional than had been anticipated, and that brand transformation was taking slower than expected. For the fourth quarter, the company expects a net loss of $0.24-$0.32 per diluted share. Not good.

Some hope
For the nine weeks ended January 4, Abercrombie & Fitch suffered a year-over-year sales decline of 6%, with domestic comps sliding 4% and international comps tumbling 10%. Although these were poor numbers, they were better than expected, and direct-to-consumer sales (now 25% of revenue) increased by 25%. That's a positive. Furthermore, Abercrombie & Fitch now expects full-year adjusted non-GAAP diluted earnings-per-share of $1.55-$1.65 versus an earlier expectation of $1.40-$1.50.

So far, it would appear as though Abercrombie & Fitch would be the best option of this group, and that's likely an accurate assessment. However, we have a red herring, and it's a tasty one.

Go urban
As stated above, today's teenagers desire urban attire more than they have in any time in history. Fittingly, you might want to look into Urban Outfitters (URBN -3.70%).

Urban Outfitters recently announced a fourth-quarter net sales increase of 6% year-over-year. Overall comps only climbed by 1%, but this was primarily because spring merchandise did not sell as well as expected over the past several weeks, which might relate to the poor weather throughout the United States. Don't worry. There are more positives.

Now consider the five-year revenue performance for Urban Outfitters versus those of its aforementioned peers: 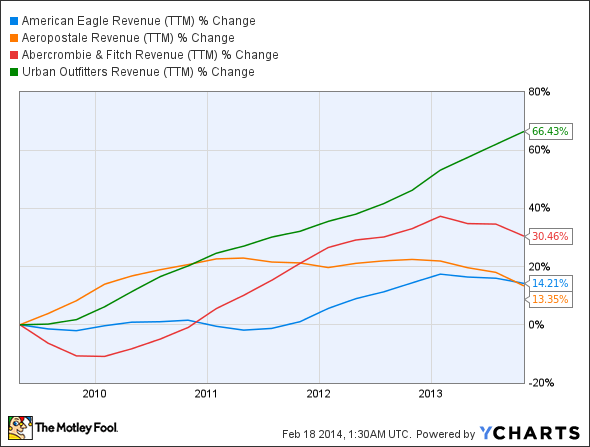 Also take into account that Urban Outfitters generated $415.92 million in operating cash flow over the past year. This was superior to the performances of Abercrombie & Fitch, American Eagle, and Aeropostale, which generated operating cash flows of $234.69 million, $357.94 million, and negative $4.05 million, respectively.

This fiscal strength will allow Urban Outfitters to reinvest more in its growing business, and potentially buy other popular names for inorganic growth (if necessary.)

Only Abercrombie & Fitch and American Eagle offer dividend yields, at 2.30% and 3.60% respectively, but that still doesn't make them more appealing than Urban Outfitters.

The Foolish takeaway
If you're looking to invest in a "teen retailer" that's on-trend, diversified with other target markets, growing faster than its peers, and offering superior fiscal strength, then you might want to consider Urban Outfitters.

Dan Moskowitz has no position in any stocks mentioned. The Motley Fool recommends Urban Outfitters. We Fools may not all hold the same opinions, but we all believe that considering a diverse range of insights makes us better investors. The Motley Fool has a disclosure policy.