Manufacturing dipped sharply this month in parts of the Northeast and Philadelphia area as wintry weather took its toll,, according to a Philadelphia Federal Reserve Bank report (link opens as PDF) released today.

After growth clocked in at 9.4 for January, analysts had expected another solid month with a reading of 8. The actual result came in at -6.3. Declines were widespread across the index's components, but the Philly Fed noted that "much of the weakness was attributable to the severe winter weather that affected the region during the survey period." 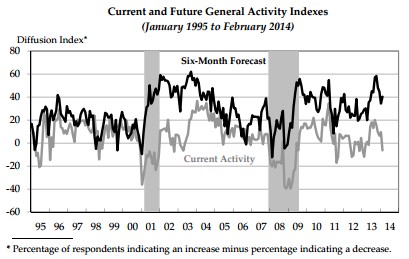 Dissecting the index into components, new orders dropped sharply from 5.1 in January to -5.2 in February. Shipments went from black (12.1) to red (-9.9), while unfilled orders continued to contract, decreasing another 1.6 points to hit -2.6.

Looking ahead, however, it does not appear that February's tough times will last. The survey's future conditions (six months from now) index registered a 5.8 point increase to 40.2. New orders expectations fell three points, but remained strong at 35.4, while employment metrics remain in solid growth territory.