Facebook (NASDAQ:FB) recently announced that it was acquiring mobile messaging service WhatsApp for a whopping $19 billion -- the largest purchase in the company's 10-year history. That massive purchase expands Facebook's umbrella to include WhatsApp's 450 million users, 70% of whom use the app on a daily basis. 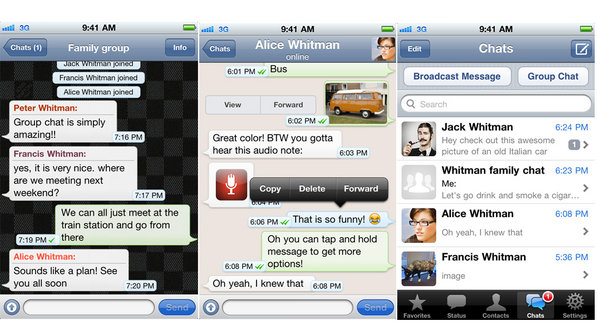 Let's take a closer look at three big problems with this deal.

1. Redundant cannibalization
Facebook intends to let WhatsApp continue on as an independent service, similar to the course it set Instagram on after purchasing it for $1 billion in 2012.

In my opinion, it would make more sense to merge WhatsApp with Facebook Messenger into a single service, since the two apps directly compete against a fragmented universe of mobile messaging apps, such as LINE, Viber, and WeChat.

Yet the top players in that universe are being acquired by larger companies -- on Feb. 17, Japanese online retailer Rakuten acquired Viber for $900 million. Rakuten's move is similar to Chinese Internet giant Tencent's launch of WeChat in 2011, which it also uses to connect users in its online gaming and e-commerce initiatives.

Rakuten and Tencent's strategies make sense -- they want mobile messaging users to shop online and boost their e-commerce revenue. By comparison, Facebook's strategy makes little sense -- it purchased a redundant, competing service with no plans to assimilate its 450 million users.

2. Fees and value per user
WhatsApp costs a nominal annual fee of $0.99 after its first free year. It's unclear exactly how much revenue WhatsApp generates, but with 450 million users, it's assumed that it can add at least $450 million in annual revenue to Facebook's top line.

However, the $19 billion deal values each WhatsApp user at $42 per user. Here's how that valuation stacks up against leading social networks Twitter (NYSE:TWTR), Facebook, and LinkedIn (NYSE: LNKD), and mobile messaging app Viber.

The problem is that Facebook is valuing WhatsApp's user base closer to leading social networks than other mobile messaging services. This apples-to-oranges comparison doesn't make sense for two reasons:

3. Ignoring its biggest competitor
That brings us to Facebook's core reason for purchasing WhatsApp -- the fact that it is growing its user base at an astounding rate of 1 million users per day. If WhatsApp keeps that growth rate up, it could theoretically generate more than $1 billion in revenue per year.

That stunning growth helped WhatsApp overtake Facebook Messenger as the world's most widely used mobile messaging service in 2013, according to OnDevice's survey of 3,759 Android and iOS users. WhatsApp holds a 44% market share across five key markets -- the U.S., Brazil, South Africa, Indonesia, and China. Facebook Messenger trails at 35% and WeChat comes in third with a 28% share.

This chart, from Facebook's own presentation, illustrates the steep growth of WhatsApp over the past four years. 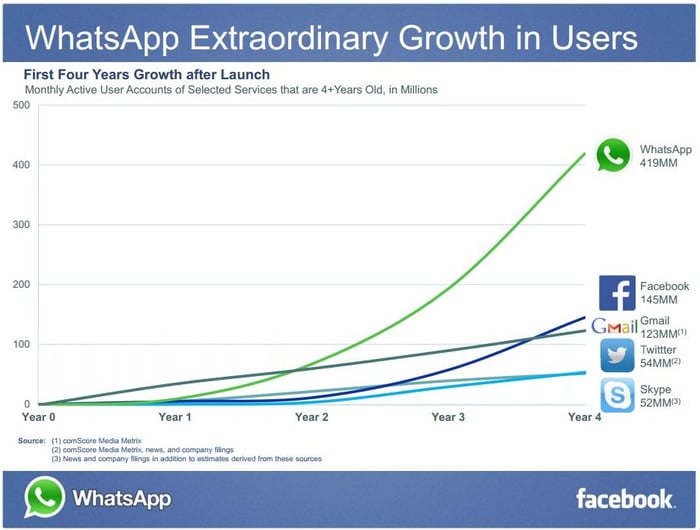 While that growth looks impressive, the chart omits the global growth of WhatsApp's true competitor -- WeChat, which has 600 million registered users and reported 379% year-over-year growth in global users in 2013.

WeChat is expanding rapidly into overseas markets, particularly in Southeast Asia and South America, where the competitive barriers are considerably lower. Tencent also recently signed a deal with Google, which accounts for nearly 25% off all network traffic in North America, to promote WeChat in the U.S. The agreement allows U.S. users to sign into WeChat with their Google accounts. 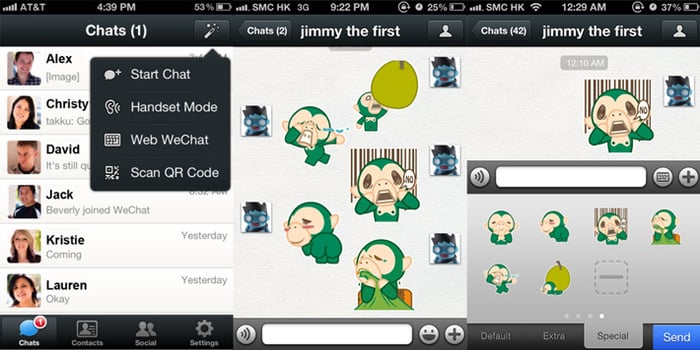 If Facebook wants WhatsApp to flourish, it needs to mimic Tencent's model of making its mobile messaging app the front end to its other services. In other words, Facebook needs to integrate its social network, photo sharing capabilities, some third-party games, and even in-app purchases into WhatsApp to make it comparable to WeChat.

The bottom line
In conclusion, Facebook's $19 billion purchase of WhatsApp either seems like a brilliant investment or a desperate move, depending on your growth expectations for WhatsApp.

If WhatsApp can continue its current growth trajectory while charging $1 per year, then Facebook just made a smart investment. However, if WeChat continues growing, Facebook might have to rethink WhatsApp's simple network design and business model to remain competitive.