A $19 billion price tag for the international messaging app has wrecked the curve for all other tech companies, in more ways than one.

He's been the world's youngest billionaire, has created the most used social media site in the world (it's the only one to crack 1 billion users), launched the largest IPO by market cap in history, gave more money to charity than anyone else in the world last year, and the year before that became the highest-paid executive in history with the world's first billion-dollar-plus bonus.

You can add another record to that tally now: for masterminding the largest acquisition of a privately held start-up in history -- the $19 billion buyout of messaging service WhatsApp. There have been bigger buyouts, but none larger for companies supported only by venture capital funding.

The WhatsApp deal is shocking as much for its boldness as it is for its size. For all its data-gathering expertise, Facebook has little information on WhatsApp's user base beyond the fact that it's huge -- with 450 million users, WhatsApp is larger than Twitter and LinkedIn combined, and every one of those users is a mobile user, the most coveted sort of the moment. WhatsApp's unique (among social mobile apps, at least) business model brought in only $20 million last year. However, by eschewing ads entirely and charging its users a minimal $1 fee for every year after their first on the service, it stands to reap hundreds of millions of dollars each year from an exploding user base that's gone from zero to 450 million in five years and which is now adding roughly 1 million new users every day.

WhatsApp could become a monster moneymaker, if it maintains its pace and its user base. But it could also go down in history as a colossal mistake. The roster of start-up megabuys is littered with as many terrible deals as it is savvy scoops, and thanks to the Internet's vast trove of information on these historical deals, we can rank them in all sorts of ways. Let's first take a look at how far ahead Facebook's buy stands from other major private tech deals in history: 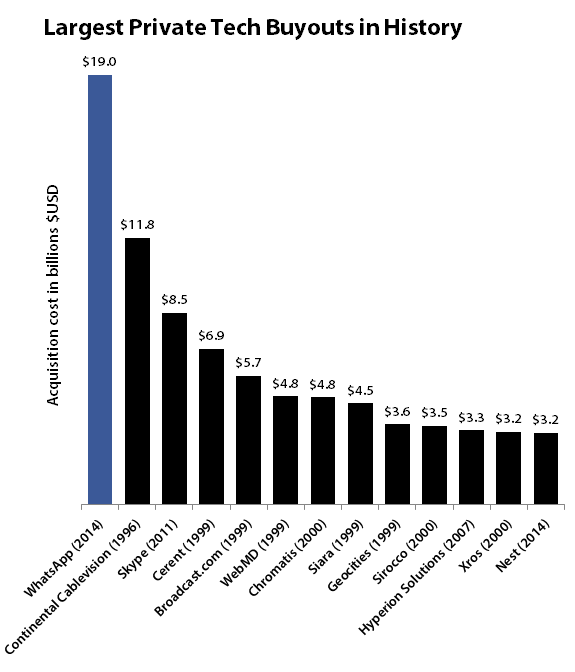 This lead doesn't shrink much when you factor in the effects of inflation -- Continental Cablevision, the oldest bought-out private tech company on our list, would be worth roughly $17.6 billion in real terms today. That's close to Facebook's monster purchase, but not close enough to dethrone it.

There are other ways to measure this acquisition, though. How valuable are WhatsApp's 450 million users? How does that value stack up against other big acquisitions? This one is a little trickier, as some of the largest buyouts on the first list were companies without a public-facing product, but we can narrow our focus to those that did have measurable user bases. On that count, WhatsApp boasts far and away the largest user base of any company ever acquired: 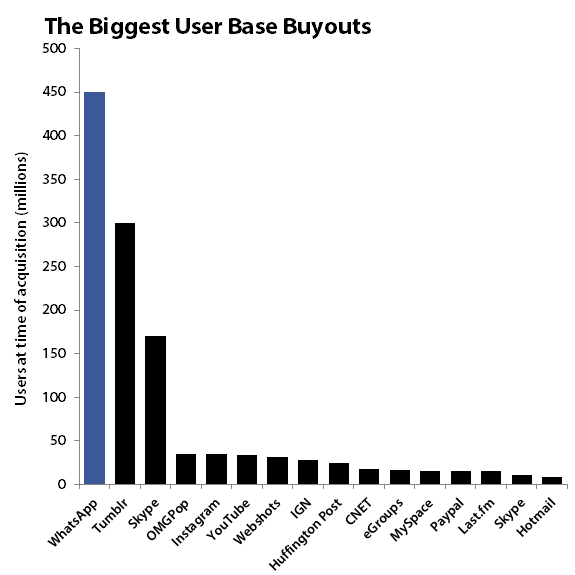 Sources: The Wall Street Journal, Wired, and contemporary news reports. Only companies with more than 5 million users at time of acquisition listed here.

On a cost-per-user basis, however, WhatsApp falls into the low end of the pack: 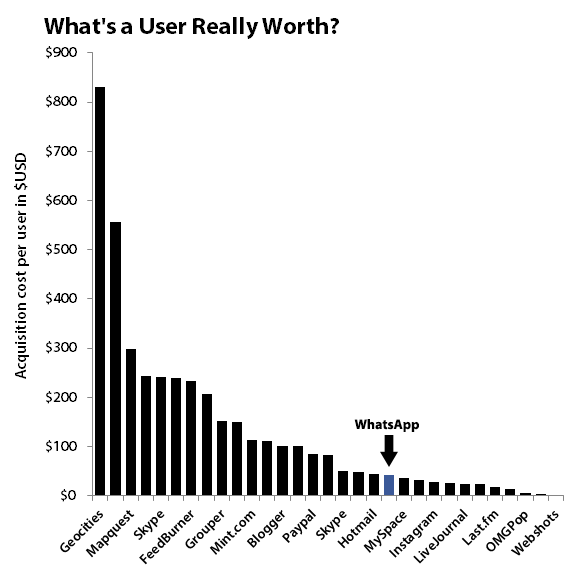 You can see how acquisition costs per user have generally fallen over time here -- Yahoo!'s (NASDAQ: YHOO) buyout of Geocities wasn't even its most egregious overspending on a per-user basis for 1999, since the roughly 520,000 users of Mark Cuban's Broadcast.com became part of Yahoo!'s user base at a cost of nearly $11,000 apiece only months after the erstwhile search engine company bought Geocities. Neither of those acquisitions turned out particularly well. Yahoo! continued to wreck the cost-per-user curve even after the dot-com bubble popped, as you can see from a narrower view: 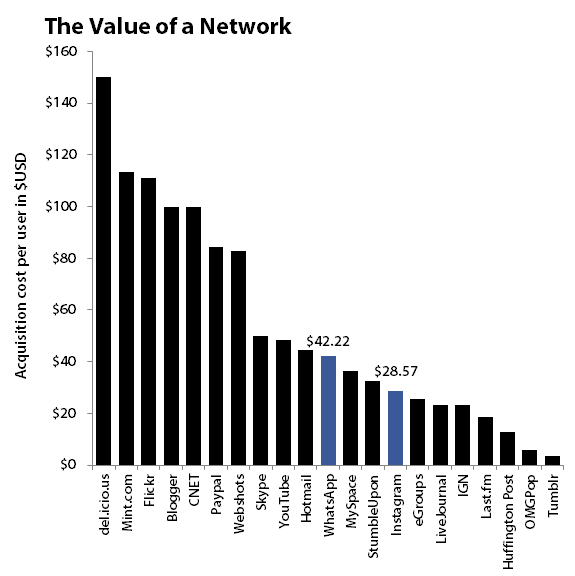 At just more than $42 per user, WhatsApp's buyout placed a higher premium on its network than did Facebook's similarly headline-grabbing acquisition of Instagram shortly before its IPO. A year after that acquisition, Instagram's user base had more than tripled and Facebook had begun to roll out advertising on the photo-editing platform. By starting from such a smaller user base (WhatsApp has nearly 13 times as many users at the time of its acquisition than did Instagram), that purchase actually looks like a much better deal for Facebook today. Instagram's leadership may very well be kicking themselves for not holding out longer.

The three buyouts most similar to WhatsApp's offer interesting contrasts in success and failure. When Google (GOOGL -0.96%) bought YouTube in 2006, it was similarly savaged as overpriced, as the site had an estimated 34 million regular viewers that Google's purchase price valued at roughly $48.50 apiece. Similarly, Microsoft's (MSFT -1.89%) acquisition of Hotmail, one of the earliest in the dot-com buyout wave, valued the free email service's 9 million users at $44.40 each. Today, YouTube and Hotmail, with more than 1 billion unique monthly viewers and 400 million active accounts (after transitioning into Outlook.com), are two of the world's most popular online destinations, and both appear to have been well worth the price.

On the other hand, News Corp's (NWS -2.42%) disastrous acquisition of MySpace in 2005 shows that even getting in on the ground floor is no guarantee of success. The buyout valued MySpace's 16 million users at $36.25 apiece, and by 2008, MySpace had an estimated 300 million registered users. The deal seemed to be paying off, but as everyone knows, Facebook soon took over the social networking space, and MySpace became a relic, abandoned by its users at such a rapid rate that the cash-bleeding site was dumped at fire-sale prices to an investor group led by Justin Timberlake.

There's one other way in which WhatsApp has wrecked the curve for all other acquisitions, one that's so outlandish that it may not be replicated for a long time, if it ever is. With only 55 employees, WhatsApp became not only the priciest start-up ever acquired, but its employees became the most highly valued in history. The old record, incidentally, was also set by a Facebook buyout -- Instagram's 13 employees were valued at $77 million apiece in 2012. Today, they're only a fifth as valuable as their new teammates from WhatsApp: 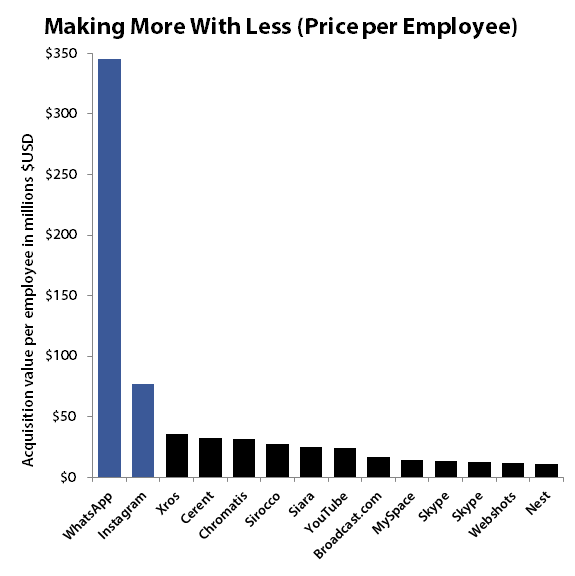 What does it all mean? Is another tech bubble inflating or has technology simply enabled fewer highly skilled workers to accomplish so much more than anyone could have dreamed of decades ago? Whatever happens over the long run, the 55 people at WhatsApp, and Mark Zuckerberg, have just set the bar a whole lot higher for the rest of the tech world.