Please ensure Javascript is enabled for purposes of website accessibility
Log In Help Join The Motley Fool
Free Article Join Over 1 Million Premium Members And Get More In-Depth Stock Guidance and Research
By Justin Loiseau - Feb 20, 2014 at 10:11AM

Initial jobless claims dipped 0.9% to 336,000 for the week ending Feb. 15, according to a Labor Department report released today

After increasing a revised 2.4% the previous week, this newest report clocked in just above analysts' expectations of 335,000 claims. 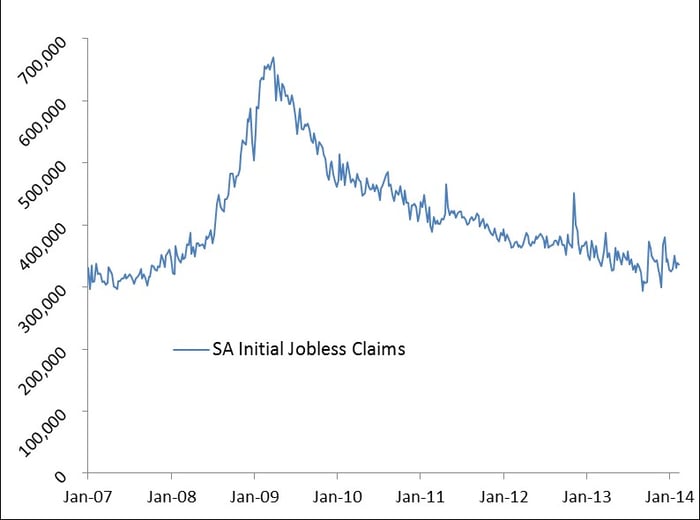 From a more long-term perspective, a 0.5% bump in the four-week moving average to 338,500 initial claims  marks the fourth straight report of increases, although none have been above 0.8% . Both the latest week's claims and the four-week average fall significantly below 400,000, a cutoff point that economists consider a sign of an improving labor market.

On a state-by-state basis, six states recorded a decrease of more than 1,000 initial claims for the week ending Feb. 8 (most recent available data). New York made the largest improvement, dropping 2,720 initial claims, due mostly to fewer construction, manufacturing, and retail layoffs.

For the same period, seven states registered increases of more than 1,000 initial claims. While six states kept increases to 1,350 or below, Georgia tacked on an extra 7,230 initial claims, due primarily to manufacturing and construction layoffs.