Maybe for Microsoft and Amazon. Apple seems to be doing ok with the iPad.

According to a Feb. 6 article on Re/code, the "love affair with the tablet is over." The author, Andreessen Horowitz partner Zal Bilimoria, claims that tablet use has peaked.

An epic run
When Apple introduced the iPad in 2010, it marked the beginning of a downward spiral in the PC industry. The product quickly became the No. 2 source of revenue for the company.

What does the future hold? According to more credible data, sales of tablets will actually grow dramatically over the next few years, while shipments of notebook PCs are projected to decline and those of ultra-slim devices will double. See Figure 1 below for a visual.

Investors shouldn't worry. The tablet is here to stay for awhile. Apple, which regularly updates the iPad with new features every year to keep users coming back for more, should keep doing well for at least the foreseeable future, as the tablet space generally continues to expand. 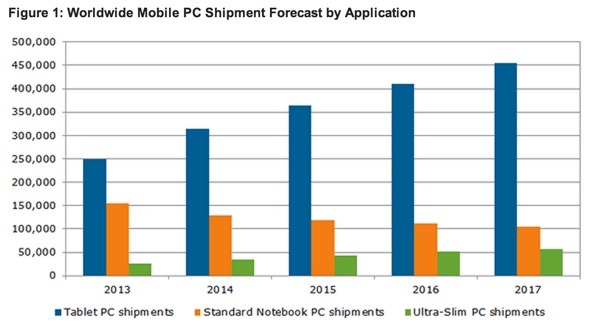 However, despite that success, Apple does have a big issue. Growth in the high end of the smartphone market, which Apple dominates and profits from immensely, could slow as the trend swings toward lower-priced handsets to gain share. The company probably needs to find an alternative to its cash cow. Perhaps a smart watch or a platform for mobile retail payments will be forthcoming this year. What will become the next Apple device that can radically change an industry?

Scratching the surface
Microsoft started offering a tablet to compete with the iPad in 2012. The Surface was one of the first Windows-based hardware programs that the company did not outsource.

The product has had less-than-stellar results so far. Only 1.7 million devices were sold during fiscal 2013, and it is likely that the company lost money on the business overall. In contrast, Apple sold more than 3 million devices during the opening weekend of sales for the latest iPad versions last fall. Maybe Bilimoria was only referring to Microsoft when he stated that the tablet was dead in that Re/code article.

New Microsoft CEO Satya Nadella might have to take the company down a different path, away from tablets. Nadella has spent a good chunk of his time at the company working on cloud computing technologies, which is generally a growing industry. Microsoft might be better off if it played in the cloud and not with tablets.

By the book
Amazon actually released the first version of its tablet series, really an e-book reader, three years prior to the iPad. The device has morphed into a multimedia device over the years.

While it certainly has its niche user base, sales have lagged behind that of the iPad and other devices. As of the second quarter last year, the Kindle series had an estimated 2.3% share of the general tablet market, down from 4.4% a year earlier. Amazon does not break out sales and profit figures on its products.

The company strategy with the Kindle is to use it as a gateway into its other businesses, especially its top-of-the-line e-commerce platform, which continues to do well. Since the Kindle is losing market share, the plan may not be paying off. Amazon might have to find another way to boost online ordering. Drones perhaps?

A note on Samsung
While Apple probably doesn't need to fear Microsoft or Amazon in the tablet space, it does need to watch Samsung. The maker of the Galaxy Note and Tab ranks No. 2 on most lists of tablet sales and has eaten into Apple's market share recently on the lower end. Samsung uses the same strategy it employs in the smartphone business. Still, Apple managed to sell 11 million more tablets than Samsung did in the last quarter.

Although emerging markets favor the lower end, where more of the future growth in tablet shipments exists, Apple's margins are somewhat higher than those of Samsung, and there probably is still money to be made by both of the two titans.

Foolish conclusion
Despite Bilimoria's pronouncement that the "tablet is dead," total shipments are forecast to increase dramatically over the next few years.

Tech giant Apple will likely continue to reap rewards from the iPad, which has grown sales every year since its release. Samsung is hanging right with Apple in the tablet space, mainly with its low-end offerings.