Denbury Resources (DNR) recently reported its fourth-quarter and full-year results. While production was up by 2%, adjusted net income fell. Let's take a closer look at why it fell flat.

Drilling down into the numbers
Denbury Resources reported fourth-quarter adjusted net income of $100 million or $0.25 per share. That was $37 million or $0.05 per share less than it reported in last year's fourth quarter. Lower realized oil prices, combined with higher costs hurt the company's earnings.

More importantly, however, was the fact that cash flow was much stronger than earnings. Denbury Resources' adjusted cash flow from operations was $295 million in cash flow. That's only off slightly from the $316 million it produced in last year's fourth quarter. For a slower growth company like Denbury Resources, we want to see stable cash flow, especially now that its paying a dividend.

Production rises
One of the positives on the quarter was its production which nudged higher by 2% and was slightly ahead of its estimates. That was despite some weather issues and a delay in the completion of its Greencore Pipeline interconnect.

Over time the company's production out of the Rocky Mountains is an area that should only get better over time. The company's Bell Creek field, for example, recently began to respond to the carbon dioxide injections. While the field was producing 177 barrels of oil per day in the fourth-quarter, that jumped to more than 500 barrels per day in January. Because of this investors can expect increasing oil production from the region as Denbury Resources starts flooding more Rocky Mountain properties with carbon dioxide.

Looking ahead
If there is one concern, it's the fact the company sees its 2014 production coming in at the lower end of its guidance range. The company has been facing weather issues early in 2014 and when that's coupled with downtime at the Riley Ridge gas processing plant, the result will be lower production.

That said, the company's aggressive share repurchase program should result in higher production growth per share. Denbury Resources already repurchased 4% of its outstanding shares in the past two months and bought back 14% of its total outstanding shares since 2011. As the following slide shows, Denbury Resources is buying back its shares at a compelling discount to its net asset value. 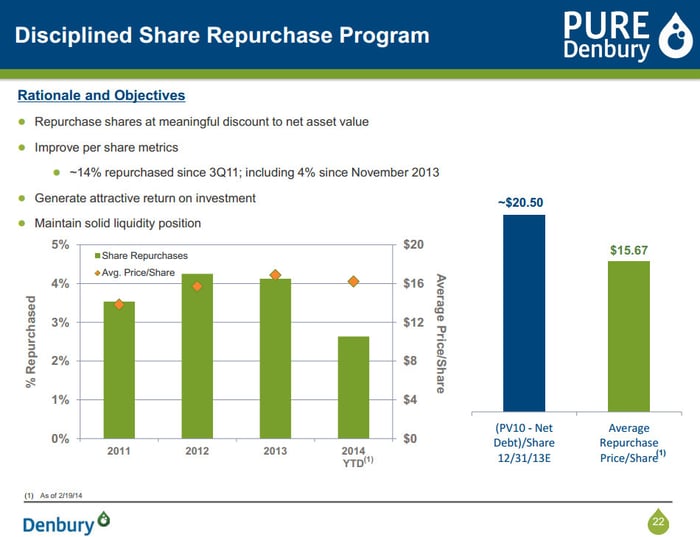 Investor takeaway
Denbury Resources didn't produce a lot of fizz last quarter, which is to be expected because that's not what the company is about. Instead, it produced another slow and steady improvement in production while continuing to deliver solid cash flow. Over the long-term this slow and steady pace should fuel solid returns for investors. Especially now that it has added a dividend.