Chelsea's Northera finally gets the nod from regulators, but whether anyone prescribes it remains to be seen.

Chelsea's (NASDAQ: CHTP) Northera, a blood pressure boosting treatment designed to help prevent fainting, finally got the FDA's go-ahead after taking shareholders on a roller coaster ride over the past few years that included a perilous fall in 2012 and an eye-popping doubling in the past few months.

Despite the treatment receiving FDA approval this week, questions remain regarding whether patient need will trump a black box warning and a lack of a study proving long term efficacy. 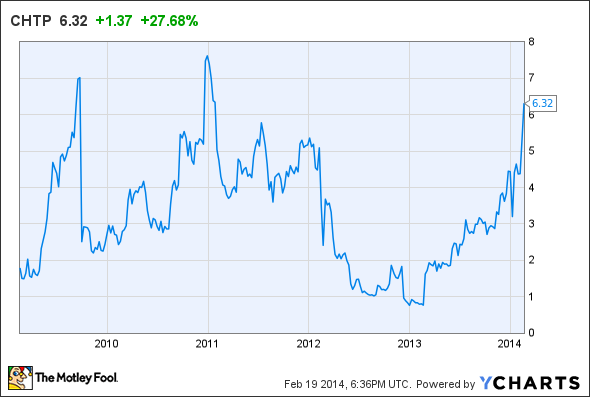 Winding its way through the FDA
Depending on whether investors were long or short, Northera's approval was a happy surprise or a glacial disappointment. Roughly 8% of the shares currently available to trade, known as the float, were held by short sellers as of last count, and it's likely that short covering was partially behind shares jumping more than 20% following the news of its approval.

There's little question Northera addresses an unmet need. There aren't any approved therapies for neurogenic orthostatic hypotension, or NOH, the conditon that Northera targets. So, Northera's ability to prevent fainting when standing will unquestionably be welcomed by those challenged to do even the simplest of tasks like getting out of bed and walking.

But you can't blame sellers for being skeptical. After all, this wasn't Northera's first time in front of the FDA. Chelsea already tried, and failed, to win over regulators in 2012.

At that time, a key advisory panel voted just seven to four in favor of Northera -- tepid enthusiasm that did little to overcome FDA concerns over the integrity of data, and questions over how patients would react to the drug after receiving it for more than two weeks. As a result, the FDA sent Chelsea a complete response letter rather than an approval.

The FDA dashed Chelsea's hope further when it refused to consider the company's ongoing 306B study to address its concerns, saying the data were unlikely to change its mind. This forced Chelsea into a major restructuring that included jettisoning costs and its founder from the CEO role.

Yet, in the end the FDA did change its mind, agreeing to consider a conditional approval based on the 306B study if Chelsea was willing to do a post-approval trial to determine the long term affect of the drug on patients. The FDA's reversal prompted Chelsea to file Northera for approval again last summer, and to launch a new, long term study that enrolled its first patient in December.

Challenging label, questions remain
Now, with Northera's approval in hand, the argument shifts from approval to whether the commercial market for the drug is significant enough to justify the company's $440 million market cap, and pay for the company's follow up study.

Bulls can take heart knowing that while Northera is designated as an orphan drug, cases of NOH aren't uncommon, particularly among those with nervous system disorders like Parkinson's. Chelsea estimates the condition affects between 80,000 and 150,000 people in the United States, and although Chelsea hasn't announced pricing, some analysts think Northera could eventually reach peak annual sales of $300 to $450 million.

Bears, however, will remember that projections like those are effectively 'shots in the dark' that may or may not reflect the black box warning that will appear on Northera's label. One of the most common adverse events during trials was hypertension, so the FDA is requiring Northera's label to include a warning against risks tied to elevated blood pressure while lying down and a reminder that patients will need to sleep with their heads elevated to reduce the chances of stroke.

Fool-worthy final thoughts
Only time will tell whether Northera will succeed or fail, and that means investors will need to watch quarterly filings closely this year to determine whether the drug is gaining traction and kicking off enough income to cover Chelsea's expenses. Those expenses not only include a new sales team to pitch the drug but also the long term NOH trial and trials exploring whether Northera has potential as a therapy for intradialytic hypotension, fibromyalgia, and rheumatoid arthritis.

Fortunately, the company has $21 million in cash and no debt on the books exiting last quarter, so that lends some support. However, in the first nine months of 2013 the company used over $10 million to pay for operating activities. That means Chelsea remains a highly speculative company that Fools should approach quite cautiously.

Todd Campbell has no position in any stocks mentioned. Todd owns E.B. Capital Markets, LLC. E.B. Capital's clients may or may not have positions in the companies mentioned. Todd also owns Gundalow Advisors, LLC.  Gundalow's clients do not own shares in the companies mentioned. The Motley Fool has no position in any of the stocks mentioned. Try any of our Foolish newsletter services free for 30 days. We Fools may not all hold the same opinions, but we all believe that considering a diverse range of insights makes us better investors. The Motley Fool has a disclosure policy.