An update on my prediction that Bristol-Myers Squibb will outperform in 2014.

Like many endurance or long distance racing sports, a solid strategy often involves patience. Getting out of the gate or off the blocks too quickly can come back to bite the competitor as they run out of juice before they finish. The same analogy can also be used with stocks, especially those with known catalysts in their future. As biotech companies prepare to release important clinical data, investor excitement often pushes stocks up to a point which may not be justified. When that clinical data either disappoints or is delayed, the company's stock often sees a harsh correction. Such has been the case with Bristol Myers Squibb (BMY -0.14%) so far this year, which I believe will be a top performer in 2014.

Can Bristol-Myers Squibb have another great year?
As of Feb 19, my prediction isn't looking so good yet. Just take a look at this chart for year-to-date performances of select large cap pharmaceutical stocks. 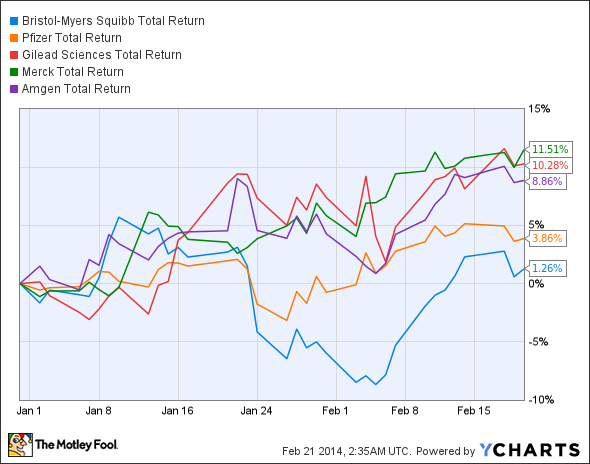 That's Bristol-Myers Squibb bringing up the rear, up just 1.3%. Merck (NYSE: MRK) up 11.5%, Amgen (NASDAQ: AMGN) up 8.86%, Gilead (NASDAQ: GILD) up 10.3%, and even Pfizer (NYSE: PFE) up 3.9% have beaten Bristol this year. Gilead is firing on all cylinders with its recent launch of Sovaldi, which looks to be a potential blockbuster drug for the treatment of hepatitis C. Merck is finally getting recognition for MK-3475, a PD-1 inhibitor that will directly compete with Bristol's most important pipeline asset in nivolumab. Meanwhile, Pfizer recently had positive data with its most important pipeline candidate in palbociclib (also with Breakthrough Designation). There is still a ways to go this year, and lots of data to digest, but this prediction is not holding up so far.

So what is going on with Bristol-Myers Squibb?
My prediction is predicated on Bristol's unique position to be the leader in immuno-oncology (IO), or drugs that cause the immune system to recognize and fight cancer. One of the major cornerstones of its pipeline is a drug called nivolumab, which inhibits the programmed death 1 (PD-1) checkpoint pathway. Solid tumors exploit this pathway and ultimately evade detection by T-cells, which have the ability to keep cancer in check. Nivolumab is designed to block this escape and allow the body to use its own immune system to fight and kill tumors. Bristol's lead in the immuno-oncology space is going to be challenged by several competitors, though. The lead appeared to narrow when Merck decided to file its own PD-1 inhibitor, MK-3475, for approval with the FDA on a rolling submission basis in melanoma, which could slow sales of Yervoy. Roche also has a compound, RG-7446, that targets the PD-L1 ligand that could also be a competitive threat and Novartis just made a small acquisition of CoStim Pharmaceuticals, a private company with pre-clinical compounds in immuno-oncology, including a PD-1 inhibitor.

The potential for IO drugs is huge and takes a vastly different approach than traditional small molecule drugs, which include targeted therapies or even traditional chemotherapies. Immuno-oncology has been estimated by some to be a $30 billion market in the not too distant future. Bristol already has one approved immuno-oncology drug in Yervoy for metastatic melanoma which generated $960 million last year and a number of pipeline candidates in development, most importantly of which is nivolumab. At present Bristol has more than 25 clinical trials studying this drug.

Am I wrong about Bristol?
Well, it is still early in the year and there are a number of catalysts to look forward to that could get Bristol-Myers back on track. However, I did overlook the stock's outstanding performance last year. Bristol gained nearly $30 billion in market value and was up nearly 70% in 2013, so it appears that investors have given plenty of credit to Bristol's late stage pipeline. The biggest indications for nivolumab include lung cancer, melanoma, and kidney cancer, and its stock performance this year will largely depend on the outcome of its lung cancer trials, which could be the first approved indication for nivolumab. We will know a lot more in June when BMY presents data at the American Society of Clinical Oncology (ASCO) conference.

Outside of nivolumab and Yervoy, it is important to assess Bristol's currently approved drugs to model out its potential revenue growth. Recently approved Eliquis for reducing stroke in patients with atrial fibrillation should have decent growth as should Sprycel for CML and Orencia for rheumatoid arthritis. It would also not surprise me to see Bristol make a fairly large acquisition this year  to continue to boost its pipeline in oncology after recently divesting its diabetes franchise to AstraZeneca. On the flipside, expiring patents could pose a challenge in the near term. Patents on Sustiva (HIV) and Baraclude (hepatitis B) expire in 2014, Abilify (depression) and other Baraclude patents expire in 2015, and Reyataz (HIV) has patents which expire in 2017. These amount to $6 billion worth of revenues that could be at risk to generics in the next 3-4 years, obviously a large hole to make up. In fact, average estimates by analysts have BMY revenues declining slightly this year and next year. As such, it is critical for Bristol to have positive data regarding nivolumab this year and get revenue growth back on track in 2016.

It is still early in the year and Bristol has plenty of time to make up ground. ASCO in June will be very important for the company and go a long way in determining how it ultimately performs this year. If the nivolumab data and an exciting acquisition ultimately prove out, Bristol-Myers could once again outperform. I will be sure to circle back to this name in June, if not earlier.

Chris Ahlstrand owns shares of Bristol-Myers Squibb Co. and Merck. The Motley Fool recommends Gilead Sciences. We Fools may not all hold the same opinions, but we all believe that considering a diverse range of insights makes us better investors. The Motley Fool has a disclosure policy.

Buy This Dividend Growth Stock and Forget About It

Why Novocure Stock Is Jumping Today
351%