Johnson & Johnson and Pfizer are both great stocks, but which will come out ahead in 2014? 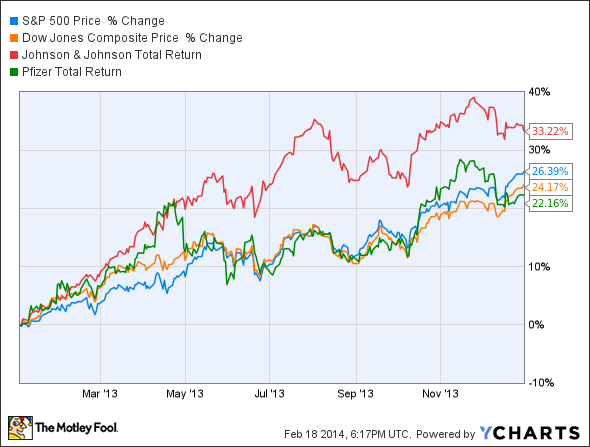 Patent expirations
Pfizer's (PFE -2.01%) share price gains have come in spite of the company's challenging fourth quarter, in which net profit was 59% lower than in the same period of 2012. As with many major pharmaceutical companies, it continues to struggle with generic competition, with a number of key, blockbuster drugs going off patent (or set to in the near future), which has a major effect on earnings.

Johnson & Johnson (JNJ -1.50%) is also experiencing difficulties with patent expirations, with 2017 set to see the end of the patent on Velcade, while Remicade is due to lose its US patent in 2018 and its European patent in 2015. Indeed, the respective cancer and autoimmune disease drugs contributed $1.7 billion and $6.7 billion in revenue in 2013 (more than 11% of total sales).

It isn't all doom and gloom for Pfizer (PFE -2.01%), which has a number of potential catalysts in 2014. Indeed, its pipeline has experienced positive news in the first six weeks of 2014, with breast cancer drug palbociclib and pneumonia vaccine Prevnar having the potential for further upbeat developments to push shares higher throughout the year. These two drugs alone could contribute an additional $4 billion in revenue in future years.

Drug development also remains a key part of Johnson & Johnson's (JNJ -1.50%) future plans, with the company gaining a number of FDA approvals in recent months. These include simeprevir for hepatitis C and ibrutinib for mantle cell lymphoma, as well as type 2 diabetes drug canagliflozin, which was approved in Europe (having been approved in the US in March 2013).

In addition to drug development, Johnson & Johnson (JNJ -1.50%) continues to restructure toward what it deems to be faster-growing offerings. As a result, it recently sold off its blood-testing division to Carlyle Group for $4 billion. This highlights the diversity that Johnson & Johnson (JNJ -1.50%) continues to offer investors, with diagnostic equipment and pharmaceuticals each making up about 40% of total sales, and consumer goods accounting for the final 20% of sales.