If marketers know where you are, they can pitch you location-specific products.

Retailers and marketers want to know where you are so they can lure you into their stores, but too often roofs and walls get in the way. One company thinks it has the way to track you every step of the way.

"Location services," for the uninitiated, refers to the element within a smartphone that tells you where you are. Or more importantly for businesses, tells marketers where you are. Armed with that knowledge, they can pitch you location-specific products.

Locating with GPS occurs when your smartphone has a clear radio view of a large chunk of the sky -- a view unobstructed by canyon walls, forests, and importantly, buildings. The problem with GPS is that those buildings -- think malls with those pesky roofs -- are where the products that marketers want to sell you are.

Workarounds for marketers include providing consumer-oriented free Wi-Fi networks. If you're on Starbucks' network, it knows you're in or near one of its stores, and it can hit you up with a splash page, for example.

Another method for locating you is constructing databases of the location of Wi-Fi networks. That method is not particularly accurate, but it's often used in mapping.

Cellular wireless networks can be used for location, but can also have accuracy issues and difficulty penetrating large structures.

Ruckus Wireless, a provider of public Wi-Fi infrastructure of the kind used in malls, public transport systems, and to back up crowded MNO-delivered 3G and LTE wireless, thinks it has a way to create highly accurate indoor locating. 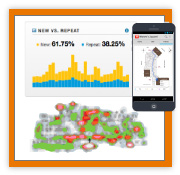 Ruckus' solution, to be launched in 2014 Q2, is a cloud-based indoor positioning system that it says works over Wi-Fi implementations.

Ruckus says that its product will be able to deliver location-relevant content to users based on their proximity to points of interest, including "timely retail offers."

In addition to indoor locating and its resultant opportunities to deliver localized content, Ruckus' new service, called SPoT, will also deliver footfall analytics to the marketers -- a kind of heat map of where people are within the network.

Ruckus is already a major player in large-scale Wi-Fi like that used in sporting events and conventions. Wi-Fi is popular in those kinds of environments, because it often provides more capacity -- and at a lower cost or often free to the end user -- than MNO-provided cellular wireless data networks like 3G.

The technological concept behind Ruckus' location system is quite simple:

The way a large-scale wireless network functions is that numerous access points are placed in dead spots. Antenna arrays at the access point then guess at hindering interference levels, and choose signal paths -- often around objects.

With SPoT, Ruckus is tracking the individual through radio-based calculations. Amongst other things, it knows how long a radio signal takes to make a round trip -- radio signals are waves, just like the echoes in a cave, or a SONAR fish finder bouncing signals off schools of fish -- and from those calculations, it can find the user.

Advantages of Ruckus' system include the fact that each vendor, say in a mall, doesn't need its own proprietary Wi-Fi network in order to track customers accurately in real time; customers don't have to log on to individual networks; and the data is all available to the owner of the Wi-Fi network.

It's not all about flogging stuff to customers though. Ruckus is keen to demonstrate its altruistic side, and says its product can be used to navigate through complicated indoor environments, like hospitals and airports. Hotels could use the product to automate check-ins for known customers.

The analytical element, where the network provider knows at any one time how many people are using the Wi-Fi and where they are, can provide crowd management in public venues like stadiums, Ruckus says.

While marketers and venue managers will undoubtedly find this kind of indoor tracking useful, consumers may not like it -- despite getting location-relevant retail offers. Data can conceivably be tied between location and purchases. You and I as consumers might find that, and other elements, creepy, which could be a hindrance to indoor location services adoption -- like Ruckus' cloud positioning.

As it stands, with existing tracking systems, the data collected in these kinds of systems is anonymously scrambled. However, it doesn't have to be, and the Federal Trade Commission has been running a seminar workshop this week looking into privacy controls on mobile location services, and whether shoppers are notified in advance.

One privacy fix that can be easily implemented is signage. A Nordstrom store tracking pilot in 2012 used door signs telling customers to turn off smartphone Wi-Fi if they wanted to opt out of being tracked, according to a recent Associated Press article.

The article indicated that existing mobile location analytics companies such as iInside, Euclid, Mexia Interactive, and others have already agreed to a "code of conduct," which includes signage and scrambling.